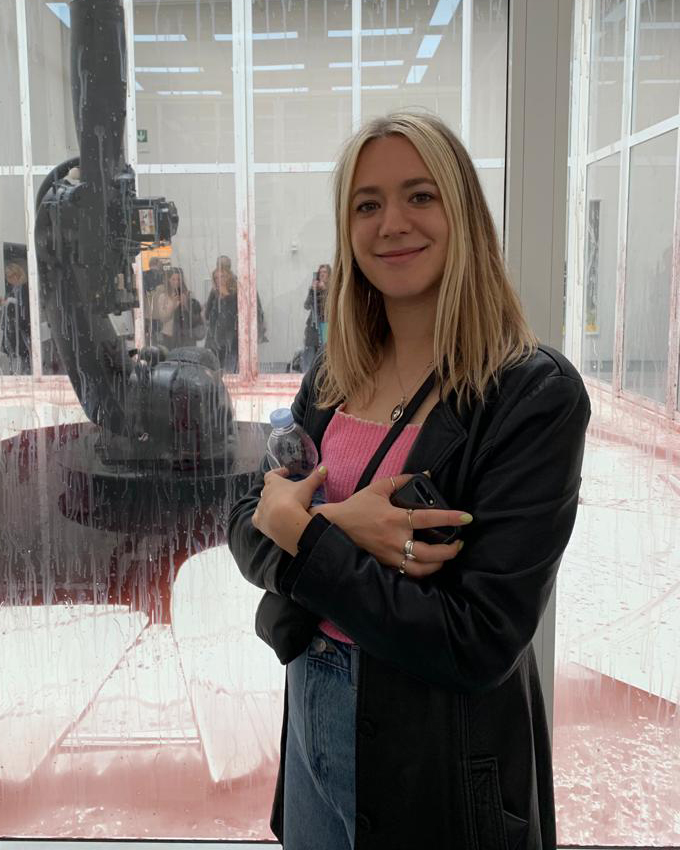 Sophie Rogers is an artist from Kent, based in London who uses digital software including Cinema 4D to create simulations of imagined places and scenes often inspired by terraforming and world-building practices found in sci-fi. Sophie is interested in the ways in which technological, human and non-human entanglement is visible; through mushrooms decomposing radioactive waste; footage of sharks eating internet cables that lay under the sea to the wealth of marine life that now grows on the temporary oil rigs off the coast of Santa Barbara. When looking at this messy, confusing entwinement, it evokes ideas of hybrid creatures and fictional ecosystems that would inhabit this in-between space. Strange, organic forms inhabit her technicolour landscapes. The colourways and textures she uses within the work are aesthetic choices, but they also refer to the promise of new technology, gently mocking the idea that technology will save us.

Hello Sophie, How would you describe your work to someone new?

Hello! I guess I would describe my work as computer generated images of landscapes, environments and worlds (vast and tiny). The rendered animations and images tend to be brightly saturated, influenced by video game aesthetics and which reference the kind of possibilities and potentiality of new technology. When building scenes, I like to think of the digital space of the software as a site for new fictions, fantasies or imaginings to grow.

Recently, I have been really interested in mycology, plants and human/non human entanglement and partnerships. I’m interested in exploring a different kind of living, one that is focussed on collaborative survival.

How did you get into digital art? Who were your biggest influences when you first started?

My work during my undergrad course at Kingston was video based but heavily influenced by games and technology. They were sort of gameplay videos with no interaction because I didn’t know how to make them lol. Once I left, I moved away from compositing and green screen to CGI and started learning Cinema 4D. Claudia Mate’s work I loved, and just couldn’t really understand how it was made, I still don’t really ! Also, artists like Harun Farocki for the way his films make use of the gaps or errors within computer games and technology. Ed Atkins, Hito Steyerl and Jon Rafman’s work also played a part in developing my interest in themes relating to technology, the impact of the internet and CGI as a medium.

Can you tell us about 3 Minutes to Midnight, the digital installation created during De:Formal Residency at New Art City?

The work I’m showing with De:Formal and New Art City is a digital installation of research for a game I am building called 3 Minutes to Midnight. The residency has provided time for some initial research and scene building, so I am aiming to populate the online space with snippets of image making/world building, research and sound.

The project takes its starting point at the moment in 2007, when climate change was added as a factor affecting the Doomsday Clock. The Doomsday Clock was introduced in 1947 by the Bulletin of Atomic Scientists and is a metaphorical, non-linear clock which represents scientists’ estimation of how close we are to global catastrophe.  In 2007,  the Bulletin expanded the clock to include climate change as one of the greatest man-made threats to humankind. At that point, the time jumped to 3 minutes to midnight.

The project will inhabit this temporality, the time of impending apocalypse, a time in fairytales associated with the breaking of a spell and a time that relates to our age commonly referred to as the Anthropocene; a time of great urgency and consequence. Research into Haraway’s articulation of the Chthulucene will inform the work along with a more focussed interrogation of multi-species survival with a particular focus on fungal networks and interspecies communication.

You mentioned that science-fiction, particularly in worldbuilding, has a significant influence on your work. Could you elaborate on this a bit?

My personal interests include science fiction novels and games which involve the depiction and exploration of other worlds so I think this plays a factor. I am interested in world-building as a way to dream, to reflect on our own world and think about what we would change, or how the details of this other world might differ from our own.

I have always been interested in video games. Not necessarily a massive player, although now I probably play the most I ever have. I’m interested in the ways they are built, occupying locations with geographical information but existing digitally; in another space. I like the power that games, fantasy and imagination have as faculties for thinking.

My work has often taken its starting point from the act of building landscapes and scenes; adding physical components such as environments, skies and grass etc.This, I consider to be a form of worldbuilding, which is informed by writing and research by people like Marina Warner, Anna Tsing, Donna Harraway and Ursula Le Guin. At the moment, I’m particularly interested in multi-species collaboration and the way in which non-human organisms like fungi for example, form mutualistic relationships with other species such as plants and animals, to improve their condition for survival. Advancing technology has also always been central to my practice and remains a prominent element of my research, especially when considering new worlds and imagining futures.

What are your favorite texts from Donna Haraway?

Staying with the Trouble has informed quite a lot of my recent work as it articulates the entanglement i’ve mentioned so well. I love how Haraway writes about the in-between/underneath spaces and the diverse life that lives in these places of ruin or damage. The life forms that live in these spaces I imagine to be quite fantastical as they are often too small to be seen or insects that so often get overlooked. Things with limbs and tentacles that make webs and pathways..I think her writing provokes a lot of imagination. Her relationship with her dog and her general attitude towards ‘making kin’ with other species is q beautiful I think, and can be read into on so many different levels. I also really enjoy her writing around Camille and the children of the compost.

What are your research and creative process like? Can you walk us through some of it?

I do a lot of research before beginning making otherwise I get stuck pretty quickly. I like to collect a variety of references which normally span from more theory based texts and technology related/ environmental studies to fiction from some of the writers I listed above.

The creative process begins with building an environment with landscapes, waters and then additional models or elements like grass or fog. I use Cinema 4D as a medium to build and the practice of building scenes relating to software locations interests me. When I was doing my undergraduate at Kingston, I played around with Unity quite a bit. I found the software quite romantic in ways, like how if you don’t apply something called a mesh collider to a plane, your character will fall through the mesh and continue to fall into the sort of expanse of digital space. I always thought that idea was quite romantic and am attracted to stories that you can draw out from the software itself.

What was your experience at Ayatana Research Residency like?

The residency was great and I would definitely recommend !! Unfortunately it wasn’t able to take place irl because of covid, so the 2 weeks took place over zoom. I was a bit nervous about this as I have found zoom pretty exhausting this past year, like i’m sure everyone has. However, Alexis who runs Ayatana made such an effort to adjust and it was really enjoyable. I’m really interested in collaborating with people from other fields such as science so I found it really valuable.

The range of speakers across the 2 weeks was amazing. We had lecturers and scientists from universities, mycological societies and participants from all over the world. One good thing about Covid was that the course became really international as people could join online. The course was quite intimate and I think some really rich conversations came out of it. I would love to attend another residency with Ayatana maybe in Canada next time though.

What do you think the future of digital and expanded art practice looks like?

A big question !! I think once covid settles down, interesting VR work will pick up again - for a while I think there was a lot of really boring VR work coming out that was all about the experience of putting on the headset and not enough about how the work was interrogating or making interesting use of the medium.

I’ve experienced some amazing projects that use VR with an element of performance and volumetric data where things are placed in your hand or it’s choreographed so it feels totally immersive. Unless you are interested in festishizing technology and it’s part of the work, I’m not a big fan of projects that rely on the technology itself to make the project interesting. I think this is what’s happening a little with NFTs.

I would like to see what happens around the progression and adoption of gaming technologies within the art world. I think there’s a lot of exciting programmes which support immersive storytelling, like Creative XR, the projects that come out of that programme are really exciting. I would be interested in seeing how artistic practitioners will work with gaming

Are there any new ideas, themes, or techniques you are interested in exploring next?

I’m interested in the combination of motion capture and gaming environments, this is something I would like to explore more. I also really want to develop my skills in sound making and designing soundscapes/effects for my work. I have a lil synthesizer that I’m learning to use, am a bit slow getting to grips with it but this is an area i’ve been really interested in. I especially like the possibility for developing something live or performative. After the residency I will be working with a creative technologist to develop the game so unreal is the next programme I am learning.

Have you seen any works or exhibitions recently (online or IRL) you find interesting?

My favourite work that i’ve seen in the past year was Meriem Bennani’s 2 lizards. The dialogue, the aesthetics, the music, everything about it I thought was amazing. I really like work that is unreal and fantastical in some way, but directly references where or when it’s made.

After the residency with De:Formal, I’ll be focussing on building on the research and development of the game. I’m working with some really exciting people so looking forward to the next few months. After working on the game, I'm starting an MFA at the Slade, so i’ll be studying from October.