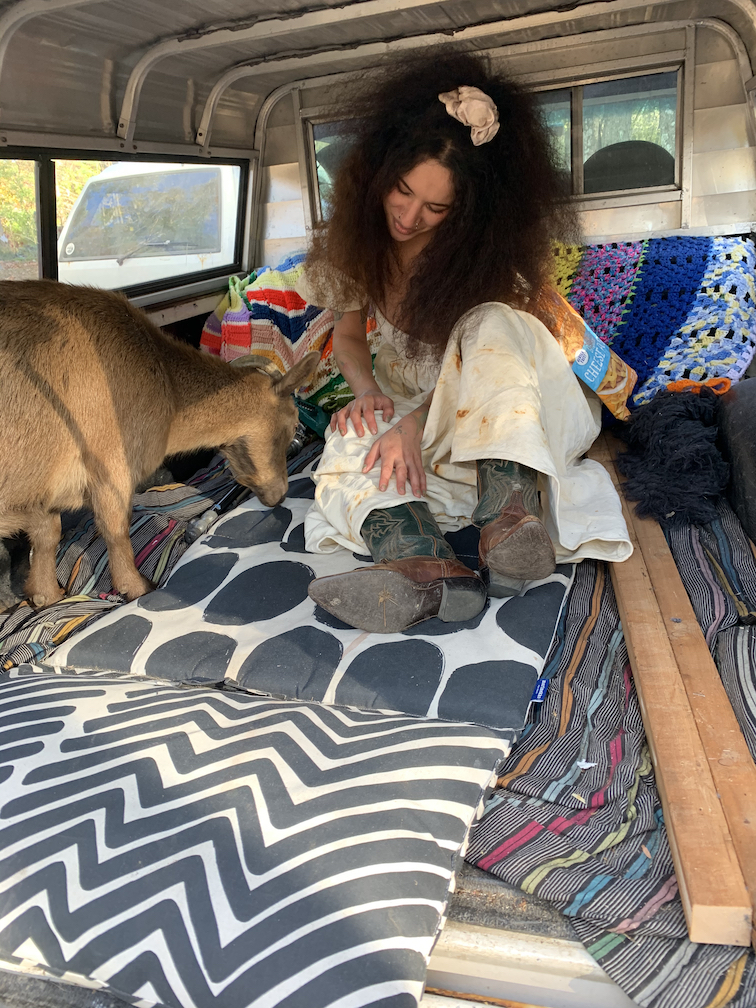 Manal Kara is a Moroccan-American self-taught interdisciplinary artist and poet based in Gary, IN.

Hello Manal, can you tell us about yourself and your background?

I grew up all over the place, studied philosophy briefly, and now I live in the dune & swale/oak savanna at the southern tip of Lake Michigan. Being a third culture kid has had a profound influence on my life and work and particularly how I engage with language. I’ve always made things and pictures and words but never thought they were worth showing to anybody until a few friends started encouraging me 4 or 5 years ago, and it snowballed from there.

How would you describe your work to someone new?

Currently, a mix of sculpture, photographs, video, poems. Materials include ceramic, parts of plants and animals and fungi, fabric, metal, words, garbage, wood. I experiment. I make work for people like me-- which is (and isn’t) anyone. Legibility is not a concern for me. I don’t really know how to talk about my artwork, because I don’t really believe in that whole thing of art being “about” something other than exactly what it is. I mean, sure, but that’s a very thin type of “about”ness.

Your work is often a mixture of ceramics, hardware, and printed fabrics, how did this come about? Do you approach each medium differently?

I use whatever works, whatever is close to hand. I think I approach them in a totally utilitarian way, but I can’t be sure. Blissfully I don’t have the impulse to overthink my artwork like I do every other arena of my life. I do at least try to modulate the impact of my material use. I was using polyester resin for a while, and I’ve sort of backed off from that. But then again ceramic isn’t as romantic as people make it out to be. Commercial clay isn’t pulled out of some riverbank, it’s assembled industrially from minerals extracted from all over the place. I have an overwhelming guilt about creating objects, about supply chain and logistics and inadvertently participating in exploitative labor practices or practices that contribute to climate change. It’s ubiquitous. For example- everyone uses cobalt. Cobalt is mined in DRC using child labor. Practically every instance of material extraction poisons waterways, accelerates anthropogenic climate change, and perpetuates the subjugation of the global south by the global north. And I know that the quarter ounce of cobalt an artist might use is nothing compared to the amount used by like Tesla or Google or Amazon, but it’s still, you know, like how the fuck did we get here? And that’s why material-based art will never be as punk as poetry or dance.

Can you tell us more about Song of the Other Worm, your solo exhibition at Prairie, Chicago?

I did a drug study to bankroll that show, like I did for many of my other shows. I was inpatient for 19 days. I thought I was going to lose my mind. I did sort of, there was one day when I couldn’t stop crying and I had to keep facing the wall because you’re in a room with other people. My roommate was very shit-shy and constipated and had to keep asking for prune juice in a whisper and would get very flustered when the nurses would respond at normal volume. They gave us digitalis, which was cool, because I have always admired that plant, and a newer heart medication, to test their interaction. I wrote a series of poems about my dick. Then I came out with $4500 and spent two months working on the show, 7am-midnight every day. The thoughts behind the show have something to do with heartbreak, because that’s my persistent state, and how varying degrees of coercion and brutality can exist in ostensibly symbiotic relationships across all species, like domestication for example. But I have to disclaim the “about”ness thing again.

Can you tell us a bit about your poetry and your dream journal? How do they inform your visual works?

The poems and visual art are created concurrently, and as such a lot of the text ends up in both. I generate text constantly, like all day long I’m writing shit down, and I keep it in a reservoir that feeds all of my art forms. As for dreams, I don’t keep a dream journal per se, but when a dream is really striking I’ll write it down or draw it. My show THE VIEWING-ROOM VS. THE ADORING-GAZE was based on a dream. I have another show coming up that is based on a dream. My dream life is very important to me, and I suffer when I don’t have access to it. There are whole landscapes and relationships and wells of meaning that exist only in my dream world. Or, I mean, I guess I can’t say that for certain, but as far as I know I only have access to them through dreaming. I was in the hall of Akashic records once, when I was a kid, before I had ever even heard of that. I’m not even the least bit woo-ey, but I am certain that’s what it was.

What is your process like making a series of works?

I don’t start production of objects until I have a show to work towards. I’m 100% deadline-driven. In the off-season, I’m doing a lot of incidental research. I go around taking pictures, not with any intention, just in the course of daily life. Same with research, I just read a lot about whatever I’m interested in at the time. Then when it’s time to put together a show I go through all those images and research and assemble them into a whole that makes some type of sense, it’s really intuitive, totally a function of the peripheral mind, I couldn’t even explain it. The process involves a lot of applying interventions, then standing back to see what that messed up, and correcting. It’s like when you’re making something out of wood that you want to be square, how you have to go around putting the screws in just a little and correcting for squareness as you go around. Or like how Denise Levertov describes making a poem, how each intervention alters something else and you go and draw each corner in together. I’m paraphrasing, I don’t remember exactly what she said, but it was something like that. And then again there’s like how the act of observing alters the object of observation, so you have to make allowances for that too. I don’t have a mind’s eye or much of a visual sense at all, so I never know what something is going to look like until I act. I’m basically just fumbling around, throwing everything together until something resonates. Or like say I’m trying to draw a rabbit, I just make some marks and oh shit it looks more like a cat, let’s add some tires and stink lines and see if that helps, ok it’s a rabbit now...

Your work often has images and texts embedded in them, sometimes cryptic and diaristic. Can you tell us more about this aspect of your work?

People have frequently described the work and especially the text in the work as ‘cryptic’ or ‘hermetic’ but I dislike that. I’m not being willfully obtuse. People have to make an effort to enter into any text. I quite dislike explicating my work. Who was it that said, a poem is not a record of an experience, a poem is an experience. Same applies here. And then there was that 80s artist who said it’s not the artist’s job to explain, critique, or even understand the work, an artist’s job is simply to make the work. I agree with that. In any case, I’m not trying to veil or occlude anything, that would be petulant and in bad faith. One last quote, sorry, but I actually know who said this one— Hélène Cixous says ”I have the inclination for avowal.” What I am engaged in is acts of wild, unbridled, desperate, orgiastic avowal. I am trying to reveal something, as much to myself as to anyone else. And that takes investigations. I don’t know where I’m going to end up. Maybe it’s cliché to say this but if I knew where I was going with an artwork I would just write an essay.

What advice would you give to novice self-taught artists who want to build their careers in the established art scene?

Don’t. jk, I mean, I have never taken a careerist view of any of this. I fell into it because I was trying to make pots to sell to pay my rent and feed myself. So, I don’t really know what to say about that, some people can do what they enjoy as their whole income generator and not despise it, some can’t. Do whatever works for you. As for the existence of any ‘established’ art scene, I would say avoid it. Stick with your friends, make your own scene. Seek out likeminded people and boost each others’ work. Put on shows in your apartments or in the park or empty lots. Self-publish profusely.

I want to work with hot glass, I want to mess with bioplastics, I would like to do an interactive hypertextual liminally-semic internet-based poem, I want to get better at video. I would like to get into writing weird essays. I want to eventually make at least a couple feature-length films, but that’s such a long and involved process so maybe when I’m 60, although that’s what I said about writing poems and that ended up happening way sooner. I would like to be able to do a handstand on a moving skateboard. I want to link up with some outsider botanists and mycologists for some interdisciplinary work. I would like very much for someone to accidentally leave their key card to a mass spec or gas chromatograph on my coffee table on their way out after our tryst. I’m always trying to diversify. I’ve been flirting with the idea of going back to school for math. I want to play that juggalo larping game Morton’s List. I wish for low key access to a very small chunk of land on which to build earthen structures for collective use. I want to figure out a way for my practice to be less solitary.

Have you read anything interesting recently you would like to share?
I’m really enjoying this workshop I’m taking through Wendy’s Subway right now called Sentient Languages, led by Mirene Arsanios. We read some Renee Gladman pieces that really resonated with me. I’m also reading Animacies by Mel Y. Chen, Afropessimism by Frank B. Wilderson III, Night Philosophy by Fanny Howe, and Glitch Feminism by Legacy Russell. I recommend all of those.

Do you have any bad habits? How do they affect you?
Working too much & neglecting to sleep/eat, never saying no to new projects. They affect me negatively! I get very depressed when I don’t get enough sleep, which is always. I’m a raging insomniac.

Is there anything else we should know about you and your work? Any facts our readers can learn about you?
I invited a benevolent inhabiting spirit called Slug Body into my person in 2017 to attenuate anxiety and other symptoms of high, airy, rarefied hot-dryness. Part of my lifelong struggle against eggheadedness/towards corporeality. It works because a slug is low, cleaves close to the earth, and stays wet. It saved my life. I want to get Slug Body knuckle tattoos where each letter is a slug done by a different friend.