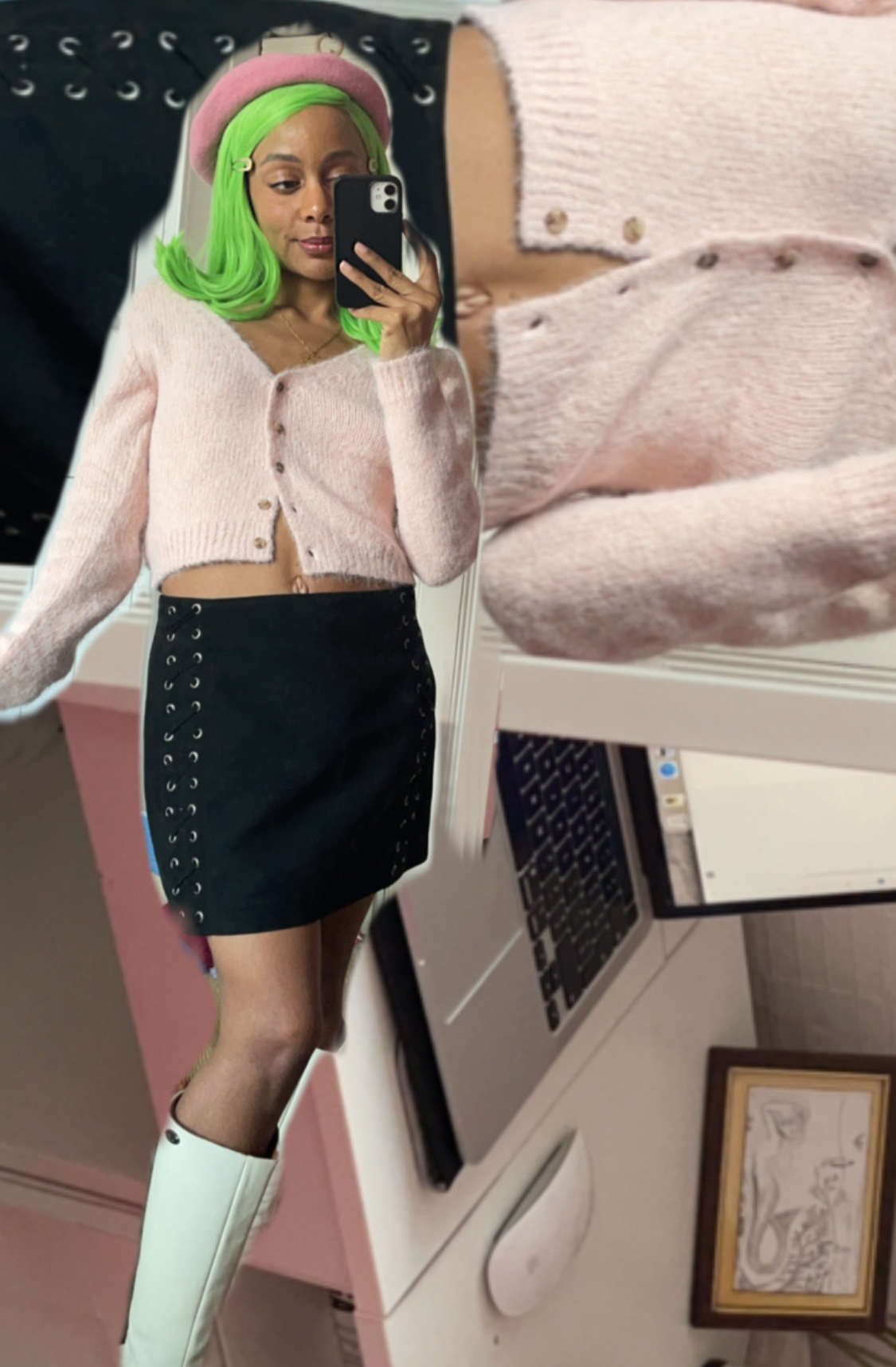 Emily Mulenga is a mixed media artist. Using visuals and sound that draw upon video games, cartoons and the internet, her practice explores themes of post-capitalism, cyberfeminism, speculative digital utopias and the condition of being a millennial. Mulenga’s output reflects a ravenous consumption of media, where gloss and superficiality meet anxiety and crisis, spanning past, present and future. ​Using 3D avatars to navigate luxurious digital landscapes, she has explored escapism, agency, race and womanhood. Through installation and digital imagery she has examined anxiety and apathy. Recently, she has interrogated the notion of the ‘end of the world’, looking at capitalist excess, haunting nostalgia and living in the anthropocene, navigating existential unease through humour. She is a graduate of MA Fine Art at Chelsea College of Arts.

Hello Emily, can you tell us a bit about yourself and your background?

I’m an artist based in the UK. I was obsessed with drawing as a child, mainly video game characters. Since then it has morphed into something other than I expected.

How did you get into making video and digital work? Who are the artists you look up to at the time?

I was part way through my BA Fine Art course and had been painting so far, but came to a point where digital imagery became a more pertinent way of exploring themes I was beginning to be interested in, such as cyberfeminism and the blurring of the IRL and virtual, so I began to make images on Photoshop. I was inspired by a book I picked up in the library called ‘T he Body in Women's Art Now: Part 3 - ReCreation’, which looked at women artists like Gazira Babeli who were working with ideas of the body via virtual worlds. I worked with imagery I found on Google to examine the uncanny in relation to women’s bodies and technology. I then created an avatar on chat software IMVU and placed her into worlds I constructed, as well as into scenarios from my IRL life. After this I began working in video, inspired by Alex Bag’s Untitled Fall ‘95, a lowbrow collection of satire which parodies art students, bored shop workers and other fragments of popular culture. Filming against a green screen I began to create my own characters based on stereotypes of people found on social media or on reality television and edited it all into something slightly chaotic.

You constructed multiple layers of realities in "Now that we know the world is ending soon...what are you gonna wear?" by weaving together narratives of an avatar, a real life version of the avatar, and your real self. Can you tell us more about this aspect of your work?

It’s a continuation of my exploration of the blurring happening between the virtual and tangible. Our identities are more fragmented than ever and provide for us an escape, an attempted vehicle for advancement, or a smokescreen. The bunny avatar jumps from the video game screen, to the streets, and becomes my ‘real’ self, reflecting the way in which we project ourselves seamlessly onto game characters, avatars and our online identities. I feel there is an element of unease in this piece of work, with reality torn apart by glitches and each dimension of the character repeatedly intruding on the other.

You mentioned Cyberpunk and Citypop being the two movements/genres you are interested in right now. What about these genres that resonate with you? How do they affect your work?

I think looking at these genres in a contemporary context there are elements of both the past and the future, which I find fascinating. I have always loved the aesthetic of high-tech neon cityscapes, which Cyberpunk embodies. The future can appear slick, beautiful and aspirational but there will be a price to pay. The exponential proliferation of technological advances we are beginning to experience, coupled with increasing wealth inequality, is a genre trope that is more relevant to interrogate than ever. With Citypop, the music was created with cutting-edge musical technology primarily during the 1980s, a time of economic prosperity and optimism. The recent renewed interest in this type of music reflects a kind of nostalgia, whether we were there or not! It feels like a smoky jazz bar, a boat trip at the beach and a midnight drive through Tokyo. I think the ‘end of the world’ vibes that are currently plentiful have created an appetite for a time period that feels more ‘familiar’ and hopeful, and that has one foot still firmly in the analogue days.

Can you tell us more about your solo exhibition "Electric Lady Land" at Enclave Lab?

I was contacted by curator Julia Greenway, formerly of Interstitial gallery in Seattle, who was studying MFA Curating at Goldsmiths. Enclave Lab is an experimental project space for Goldsmiths curators and Julia had the idea of making my video Electric Lady Land into a 3-channel installation. So I created an additional video channel which formed the two side projections, and we got some light up cubes for seating. I loved the result, it felt immersive and really fun, and I was proud of it. The space was transformed into a glowing cocktail lounge which reflected the content of the piece, which embodies the glamour, longing, pleasure, melancholy and feminine fantasy of urban nightlife.

What is your process like? Can you walk us through some of it?

I write a lot in my sketchbook and in my phone notes, scraps of ideas, interesting phrases that pop into my head, and often just lists of words. I’m afraid of making bad art, and overthink everything, so often nothing will get made at all. I tend to work best with a deadline, and leave things until the point of panic. Eventually something gets squeezed out.

Can you tell us more about Green Screen Dreams? How did the opportunity come about? How was your experience leading the workshop?

The education team at Tate Britain got in touch with me about doing a workshop for the event Late at Tate Britain: Dystopian Narratives. I‘d previously led a workshop at Camden Arts Centre incorporating the augmented reality green screen app Virtual Super Land, which was received really well, so I thought I could use it again. Really fortunately I was introduced to Natasha from Virtual Super Land by Hannah Neckel at an opening in London, and we had a chat about me using her app in the workshops. Natasha and I worked on a custom ‘Mulenga’ filter together which became available for one day only during the Tate event. I had great support from staff during the workshop, with a lot of visitors dropping by, and we had a lot of fun filming on the app and making green-screenable wearable items. I love the Virtual Super Land app as it instantly replaces anything green with these really cool CGI graphics in real time, blurring your immediate environment with fantastical imagery.

What are you working on these days? Are there new ideas or themes you are interested in exploring next?

I have a few projects upcoming. All will be revealed.

Do you have any advice for artists who want to explore digital art and work with digital mediums?

I would say to not get caught up in using the newest medium for the sake of newness. Focus more on the content and message of your work and less on how shiny and high tech it is.

What do you do to cope with anxiety related to perpetual information overload from networked technologies?

I delete the Instagram app off my phone sometimes or spend a few days away from it. It gets too much. I put my phone on silent most of the time, minimise notifications and usually put it on airplane mode while I sleep. I try to work during the day and save the evening for relaxing. It’s hard to stay away from screens but I make sure to not to look at them too much before I go to bed. Balance is important- I take time to be in my physical body, taking care of it, doing offline things with my hands like cooking, and I marvel at the natural world. Yoga is a daily practice for me and provides ritual and grounding.

I’m up for collaborating :)