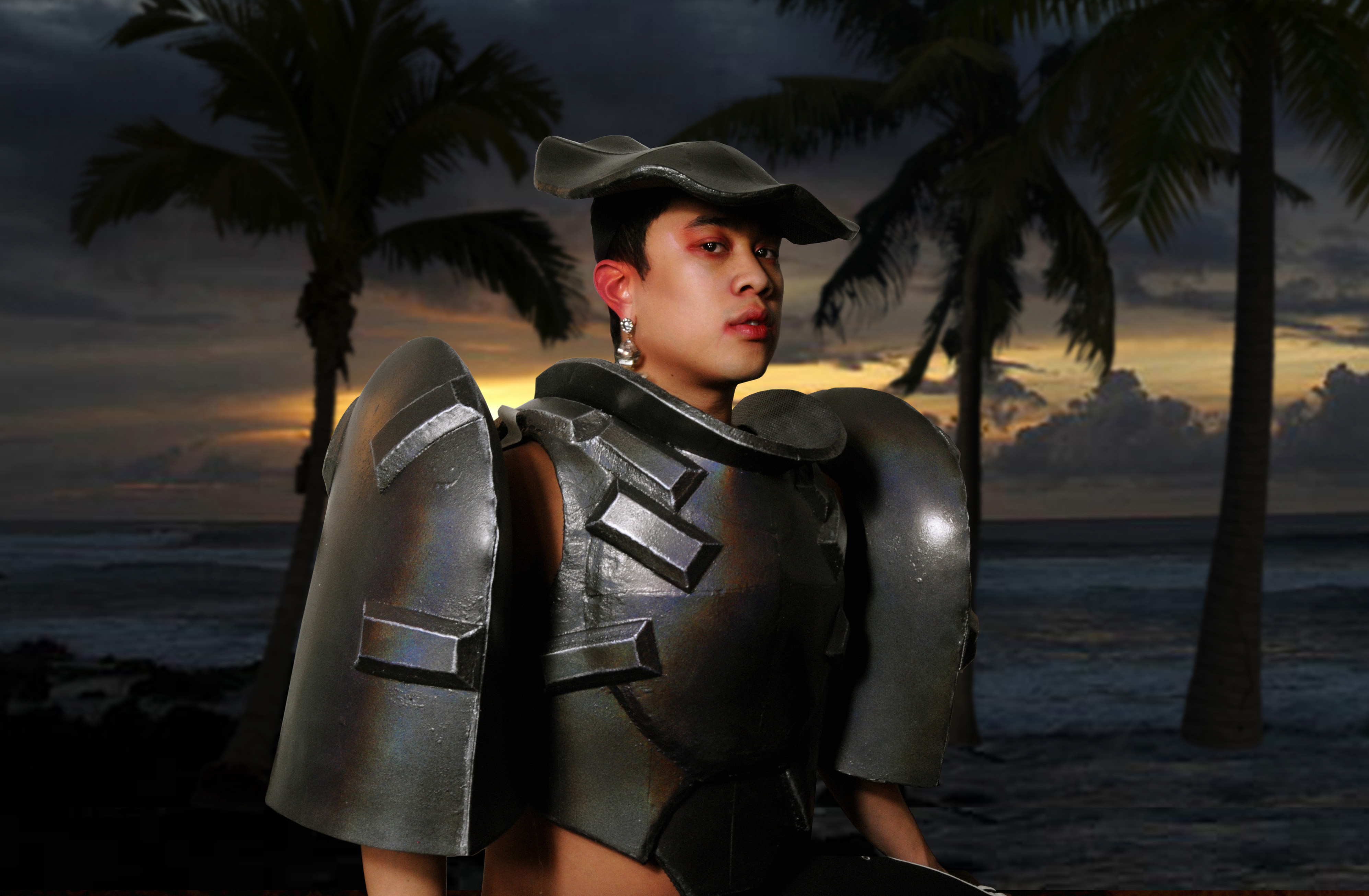 Keith Lafuente is a multi-disciplinary artist and designer. His work addresses fundamental questions of identity and desire, using fashion and drag for their intimate relation to the body. His fashion presentations combine storytelling, clothing, and performance to show queer Asian-American identities in flux: navigating between invisibility and hypervisibility, history and fantasy, necessity and pleasure. In drag, Lafuente goes by the name Mahal Kita, which is the Tagalog phrase for "I love you."

Hello Keith, can you tell us a bit about yourself and your background?

I’m a queer, Filipino-American artist and designer. I grew up in New Jersey and studied fine arts at Carnegie Mellon University. In terms of fashion design and sewing, I’m completely self-taught (thank you, YouTube!). Currently, I am living and working in New York.

How do you come up with the themes and concepts behind each collection?

My work is very personal; each collection is a response to daily experiences, struggles, and desires. I work intuitively and try not to overthink or predetermine too much because I believe the most important ideas rise to the surface naturally.

Perhaps the most deliberate part of my practice is my approach to Filipino culture. I grew up not knowing any Filipinos outside of my immediate family, so for a long time I’ve felt disconnected to that part of myself. I use my work as an opportunity to learn more about and connect with my heritage. As it turns out, it is quite complicated (thank you, colonialism...).

Your Spring/Summer 2021 collection is presented entirely virtually with 3D rendered design and animated characters. Can you tell us more about this collection? How did it come about? Do you plan to further experiment with digital media in the future?

The artist Joanna Lin reached out to me wanting to collaborate on an animated project. I would send her my sketches and she would translate them into 3D. We would go back and forth until the outfit felt right. Many of the looks were inspired by Japanese archery and Beijing opera costumes. I think there is a meditative quality to the collection, but I also find it sexy and even a little silly. We have been stuck at home for a long time, but the collection offers a sense of open and limitless nature, a breath of fresh air. This was only the first step, though - we’ve only touched the surface of what is possible with this medium.

Your runway presentations are often performances packed with narratives, backstories, and characters. What is your process like putting together a show? Which parts of your process are your favorite? Why?‍

There are three main aspects to my work: the clothes, the story, and the presentation. I start with the clothing, making everything myself by hand. The design process helps guide me to the story I want to tell. Once I’ve decided on a basic direction, I will do research, then start writing the script. My writing is usually informed by Filipino history, as well as TV shows or movies I am watching at the time. The presentation itself is a lot of logistics: finding a venue, casting, styling, photography, video, make-up, hair, and the like. I will also record original dialogue and mix the soundtrack. To be honest, most of the time everything feels like a big mess; my favorite part is when it all finally comes together at the last minute.

Your work is a constant flux that refuses categorization, instead of the binaries, it draws attention to the spectrum in between. Can you tell us more about this aspect of your work?

In a perfect world, I would say that I don't care about categories at all. Every time I see something new that I like, my first thought is “how can I do that?” I just follow my whims, regardless of what it is.

In reality, it is difficult to make a living that way, because people are far more comfortable with predetermined categories. People's sense of value changes depending on what they think my work is: a painting on canvas is bound to be valued differently than a T-shirt with the same painting. Should I be showing at a gallery, a nightclub, or a shopping mall? To me, the only real difference between fashion and art is not the object itself, but its context. How is something I make understood within the history/trajectory of art, versus the history/trajectory of fashion? How can those separate histories be reconciled? I’m still trying to figure it out.

Can you tell us about your drag persona, Mahal Kita? What is her origin story? What does she represent? What is her performance like?

I was introduced to drag by my ex-boyfriend. It started as a curiosity and transformed into more of a testing ground - a space to play with identity with irreverence and absurdity. Now, I consider drag to be an essential part of my practice. I’m known for my unique make-up style, which often includes intricate designs that obscure my facial features. For performances, I’ll lip sync a Filipino children’s song, embody the savage stereotype as I compete with Gordon Ramsey on the reality show Naked and Afraid, or undress to gay erotica of Magellan’s fateful encounter with indigenous hero Lapu Lapu. These performances inform my fashion, which in turn informs my drag, which then informs my fashion...

My favorite performance was when I lip-synced to a karaoke version of Whitney Houston’s “I Have Nothing.” There were no vocals on the track, but the audience sang along and became my voice. Experiences like this helped show me that another reason I was doing drag was to connect more deeply with my local queer community. It's in the name: Mahal Kita means “I love you” in Tagalog.

You often work with a team of people, including performers, makeup artists, and stylists. What are your favorite memories from working with a team? Have you run into any difficulties? How did you resolve them?

I’ve always had this problem where I don’t ask for help - I’m afraid of being a burden to others. Figuring out how to work with other people has been a tough but rewarding experience. Sometimes it is about being able to properly manage and delegate, and other times it is about relinquishing control and opening up to possibilities and ideas that I never could have done on my own. A big part of it is building up my own confidence.

I am so grateful for all the support from my friends, I would never have gotten to this point without the generosity of many people. I also love hearing that my work has brought people together in ways that wouldn’t have otherwise happened.

We noticed that you are involved in Bubble_T, an iconic queer Asian-led dance party and community based in Brooklyn. Can you tell us more about this community? Does it inform your practice in any way?

I was very lucky to be in a “right time, right place” kind of moment. When I first began doing drag, a new dance party had also just started. It turned out to be Bubble_t, the only queer Asian American party in NYC at the time. It was there that I finally found what I had been unconsciously searching for: cruising with a tequila in one hand and a Spam musubi in the other. Bubble_t was, and continues to be, one of the only spaces where I don’t have to explain, defend, or legitimize any aspect of my being. Since my drag debut at Bubble_t in 2017, I have become part of an amazing community of people with whom I can find inspiration and mutual support. Many of the people I collaborate with and cast in my work I know from Bubble_t.

For the past few years I've been really interested in BL, aka Boy's Love, which is a relatively new genre of gay romance/coming-of-age serial television predominately produced in Thailand and Taiwan. Queer asian representation is few and far between, so it has been really exciting to see how successful BL has been in the past few years - I believe there have been over 50 shows produced in 2020 alone! (For beginners, I would recommend the show "History3: Make Our Days Count.") Although BL certainly has its share of problems, it is a rich source of inspiration. In the near future, I would love to create my own version of a BL show.

I’ve been in a very post-apocalyptic mood, so I’ve been enjoying shows like Alice in Borderland and Sweet Home. I usually stay away from violent media, but for some reason Asian horror feels less petty than most American horror.

For something more heart-warming, I recommend The Uncanny Counter. One of my biggest pet peeves is when male characters are told to stop crying when they are sad. But in The Uncanny Counter the main character cries so much! I love a hero that is both strong and vulnerable.

Do you have any bad habits? How do they affect you?‍

I'm so hard on myself if I'm not being productive 24/7, which is a completely unfair expectation. I get overwhelmed easily and take a lot of stress naps. I can be lazy, disorganized, insecure, eat badly, don’t get enough sleep, and watch too much TV. But the procrastination does affect my work in unexpected ways: I can suddenly find inspiration at 3AM while binge watching otter videos on YouTube. You really never know. My work reflects my life so I should just live it! I am getting better at knowing myself, not forcing myself, and forgiving myself.

Is there anything else we should know about you and your work?‍

My next presentation is planned to be released later this year, sometime in late spring or summer. Keep an eye out!