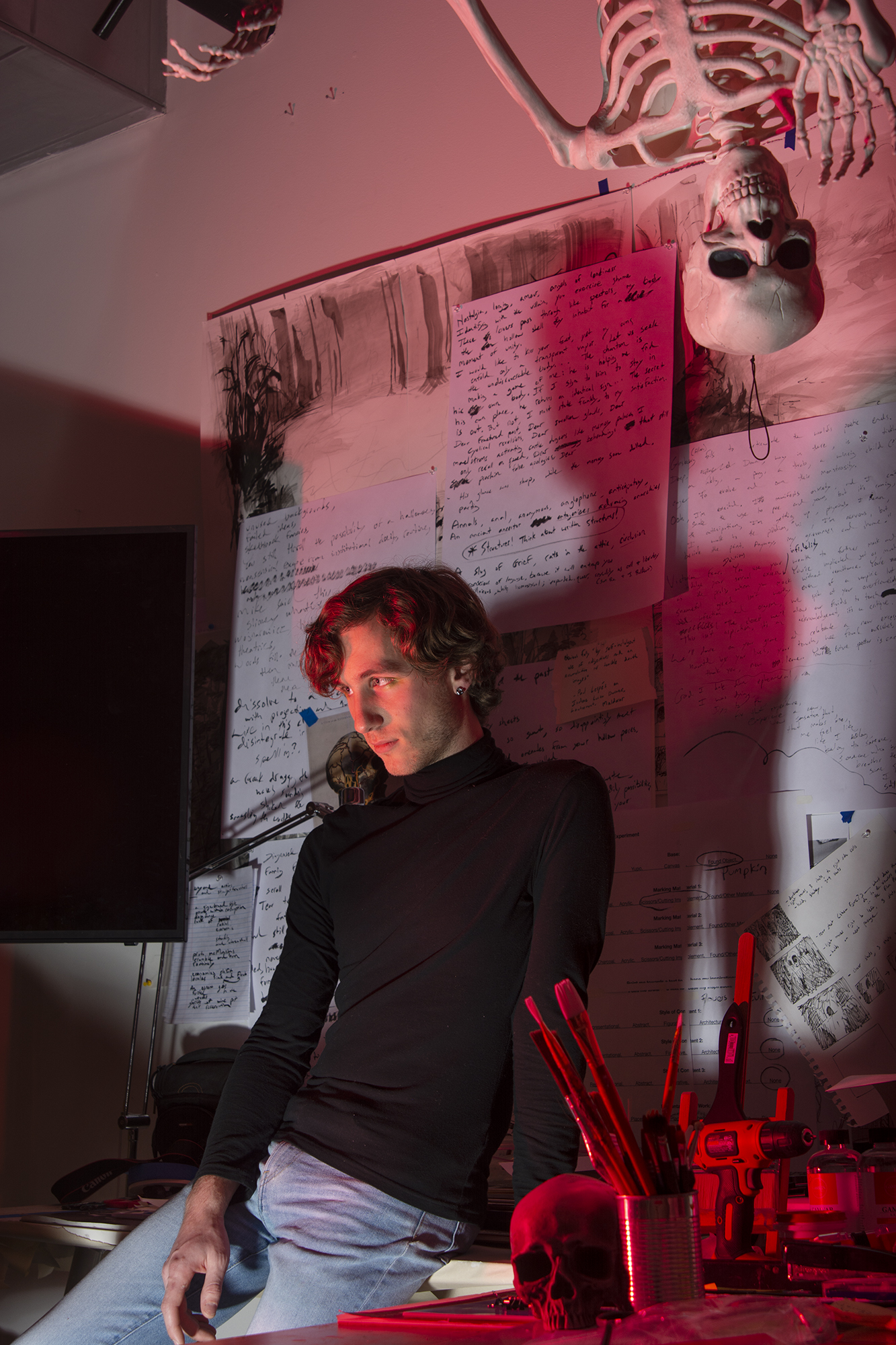 Curtis Welteroth is a queer, gender-nonconforming artist and is currently a Yale University MFA candidate in the Painting/Printmaking department, graduating this year. They were born in central Pennsylvania (USA) in 1994, as the youngest of four children. Their interdisciplinary artwork interrogates the histories and contemporaneity of a queer body politic in relation to the Gothic and horror genre. In their recent body of work, Welteroth began exploring a nascent, 1990’s attraction to green slime, its cultural origins, and its psychoanalytic potential.

Can you tell us about the links between your love for the gothic horror genre, your upbringing, and your queer identity?

That’s a lofty question to try and meet with an answer. So many of my studio interests stem from childhood interests and affinities. I was the youngest of four children growing up in central Pennsylvania, and with the isolation that came with a rural upbringing, I really clung to the media I had access to: books, comics, cartoons, the internet’s public, nascent days, etc. Only through therapy and attempting to better understand my childhood did I realize how dark and gothic much of that content was: Goosebumps books, Junji Ito manga, the Castlevania video games, etc.

Over time, I became more aware I was queer in my sexuality and gender. I clung even more to this media as comfort and escape from the fear of having to come out to my friends and family. After the first coming-out to my family, so much of that horror felt cathartic, masochistic, like it was my way of processing the shame I faced externally, and processed internally. The motif within the horror genre of the outsider invading those inside a structure spoke volumes to me.

Castle interiors, brick walls, and confinement structures are present throughout your work; they give us a sense of wonder, mystery, and entrapment; what are your thoughts and motivations behind it?

I believe capital-P painting and its western-European textbook histories (the work itself, as well as how it’s framed and written about) have knowingly relied on dominant structures (literal and metaphorical) to present inaccurate, exclusionary, narratives. The Castle structure today also holds so many connotations with imperialism and the oppression of people who don’t fit into the white, male, cis-gendered, heterosexual, and wealthy, mold of being. That all being said, Painting from this history, as a luxury good, is an object I want to render as fallible and structurally unstable through varying levels of subtlety.

What does the green slime and ooze flowing and leaking throughout your work mean to you?

To me, for better and for worse, it’s all there: sexual discovery for children (nickelodeon game shows), toxic runoff from fracking, Kristevian abjection, a substance of growth, a substance of decay, etc. In a way, I want this slime’s abstract nature to manifest as an entry point for the viewer beyond on my own subjectivity. The many associations it has between the real and the fantastical, the representative and the abstract, read as an interesting paradox, and one that negates affective and associative binaries.

The figures in your work, more often than not, have no signifier of individual identities. They are skinless and without facial features - portrayed with universal human parts such as internal organs and skeletons. Is it intentional? Can you tell us more about it?

Absolutely. Rarely will I paint a fully recognizable, human figure. If I feel figuration is an important component to the work, then I’ll typically opt to let the viewer or participant of the work be that figure. I’ve learned that depicting or rendering a human figure in an artwork entails some kind of ownership and authority by its creator (whether they’re based on a living being or fictitious one). That sense of ownership doesn’t sit well with me ethically, but is made manifest in my Slimed painting, and its figural components melting beyond and between states of representation.

What made you start experimenting with showing work under UV blacklights? Do you see the blacklights as part of the work? ‍

That’s a good question. I was interested in implicating the viewer more in the work beyond just them looking at a discrete, commercial, object. The UV/blacklight’s forensic associations too was of interest, especially in my ‘Untitled (Bedsheet)’ piece. Imprinting unseen fluids from the various bodies on a bedsheet to become an archive. The black lights (both the object and the light they emit) are undoubtedly artworks in and of themselves. After so much painting, I’m currently returning to the UV Blacklights to explore exactly that: how they can be the artwork beyond acting as a tool or prop to activate a different material, or object, or person.

We love how you combined horror and mystery with humor. In what way is humor important to you? How do you approach humor in your practice and your daily life?

That’s tricky to answer. I’m happy people can find humor in my work, it has those notes, hints, but with my push towards horror and Gothicism as a means to unpacking lived realities, I fear a humorous interpretation may feel disengenuous... levity. The horror can be viewed as humorous to take its power away, just as the humor can be viewed as horror. I feel that Mike Kelley found that balance so perfectly in a lot of his work. Pulling from his lower-middle class, white, suburban upbringing, mocking it, mocking himself, and opening these connections up for a broader social critique. That all being said, finding humor in the world is a constant element to my life. It’s a survival strategy. If I don’t make fun of myself, then I can’t live. I want that to exist in my work as well.

We noticed that the subjects depicted in your works are often in a state of metamorphosis - they are glowing, heating, melting, and leaking. Can you tell us about this aspect of your work?

Totally! Everything in our perceivable world is in a constant state of change, evolution, decomposition, rearrangement, if not on a cellular level, than on an even smaller, atomic level. Identities change, structures change. What is new and what is old feel like an outdated, binary way of categorizing that I feel less kinship with, even in the most abstract sense. We’re not beings of singular experiences, perceptions, ideas. This kind of inconsistency to me feels both intimidating and reassuring- we’re never alone. It’s that metamorphosis I strive to articulate, render, in my work and life. Heating, melting, leaking...motion.

Can you give us some insight into your video installation, Untitled (Three Channel Video)?

Oh I love that installation. I was fortunate to enroll in Sondra Perry’s “Spectral Spaces” class in the Photo Department here at Yale last Fall semester, and a part of the course was that she invited us to on a ghost hunting field trip at the Metropolitan Museum on Halloween. She brought us all this tech (dowsing rods, EMF readers, audio recorders, and a thermal imaging camera), and in small groups we were tasked with exploring the museum and (respectfully) communing with the spirits of the museum that surely still lived in its vast hoard of objects.

It was formative for me because of the emotional surrender and experience my classmates and I all got to embrace with varying levels of skepticism- thinking so much of it to be a pseudo-science. Rather than continue to read and theorize on spectrality, hauntings, and childhood development, we got to actually place our bodies and minds in a space charged with historical activity, for better and for worse. That’s a more long winded way of saying that a more direct, introspective, ghost hunting experience was at the heart of that installation.

Do you approach making paintings, videos, and sculptures differently? If so, how?

Differently? Not really. I mean, beyond the amount of time it takes for me realize a project with different materials, and within varying parameters, I would say no there isn’t any conscious difference in my approaches. My internal logic for creating work, when the spirit moves me, feels fairly consistent throughout my practice. That consistent approach trying to be an evolving exploration.

What are your favorite horror films and books that you'd recommend?

Oh god, I’d recommend damn near everything Dario Argento has directed. Suspiria was incredibly formative for me as a teenager, along with Phenomena and Deep Red. I recently finished In The Dream House by Carmen Maria Machado as well. She’s brilliant. And I don’t know if you can categorize The End of Evangelion as horror per se, but it’s certainly a terrifying, heartbreaking, complex film.

I should also mention that reading George Bataille’s The Trial of Gilles de Rais was hugely influential on me. It’s horrifying. This text opened new routes for conceptual interrogation in my studio around class, economy, religion, and “bad queers.” While his life and corrupted acts occurred back in the European Middle Ages, Bataille’s writing on him elects an incredibly contemporary framing.

Constantly. I love to negate my last move in the studio in favor of more promiscuous artistic development- deliberate inconsistencies. At this very moment, I’m thinking about the capitalistic horrors of commodification, specifically in the arts, and how the market’s unregulated, unpredictable nature further feeds into a widening economic and class division. Anything can be commodified, and that fascinates me, as commercial salability of my work isn’t something I want to rely on long term, if at all.

I’m also pushing for more specificity when making work inspired by psychoanalytic research, so I’m just spending more time with Lacan, Winnicot, and Klein. The when and the how of trauma development at a young age, the ways children perceive it and cope, and how that feeds into, or inhibits, a “coming out” impulse.

Also I’m dying to get back into zines and bookmaking!

Is there anything else we should know about you and your work? Any fun facts we can learn about you?