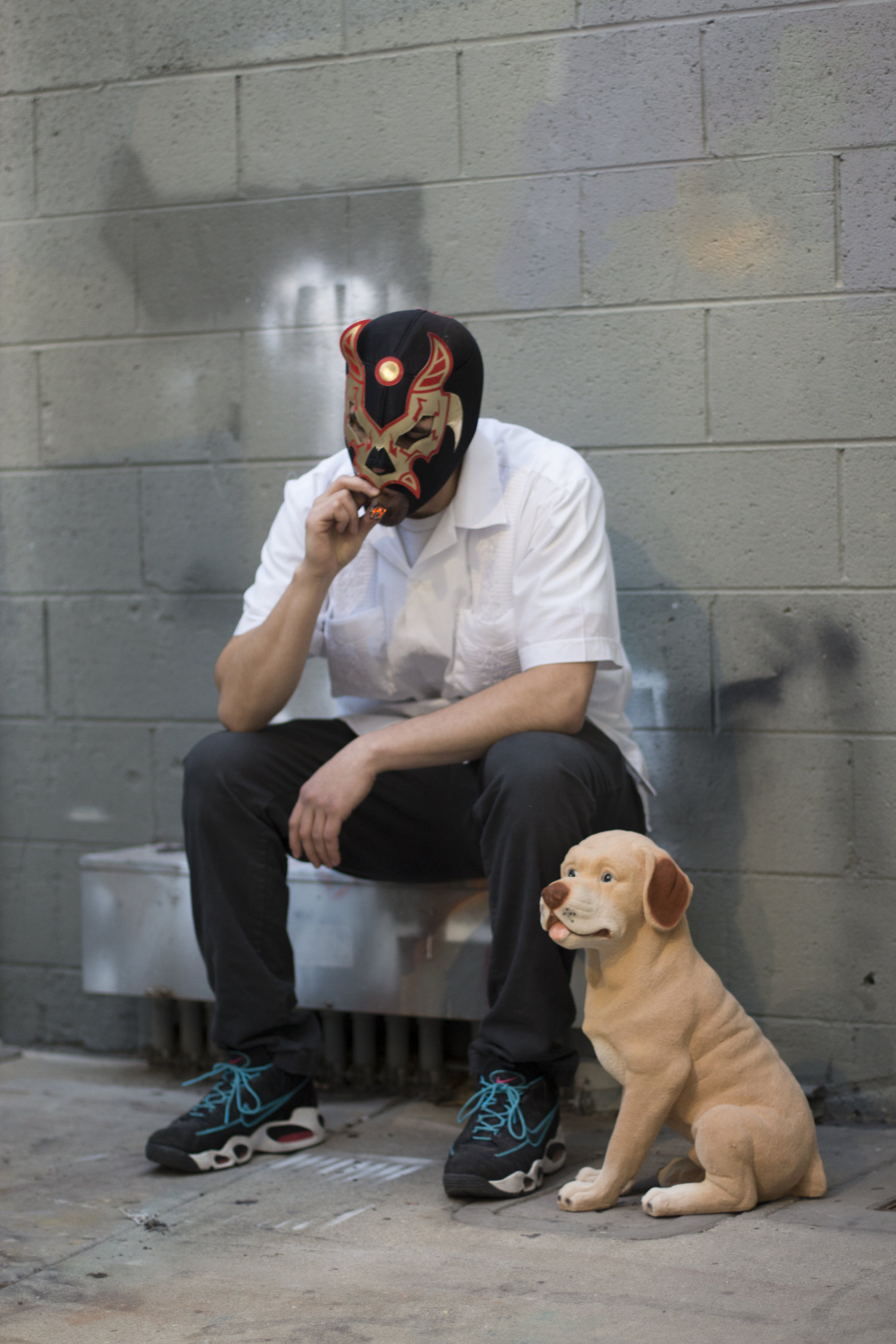 Gabriel Madan is an artist based in Los Angeles. He received his BFA in Printmaking from the University of Miami in 2015 and is currently pursuing an MFA candidacy at ArtCenter College of Design in Pasadena, California.

Hello Gabriel, can you tell us a bit about your background and your practice?

I was born in Miami, FL to Denise and Rafael Madan. Like a lot of Cuban-Americans living in Miami, I enrolled in the business program at Florida International University. While I was there, I began working in a stock investment office, and got a glimpse of what a career in finance would look like. As I was becoming disenchanted with that world, I enrolled in a digital media course to fulfill a required elective in art.

One day, my professor in that class showed us a video of Wade Guyton working in his studio. He was in a room that was completely empty, except for an Epson printer, which he was running canvas through. Seeing this new way of making completely changed me: I made the decision to drop business and pursue art on the spot. Shortly after, I transfered to the BFA Printmaking program at the University of Miami.

My early practice was pretty straightforward: I would make paintings and prints, never working with multimedia in the way that I do now. Then, an event in my life suddenly changed the way I saw art, and the ways in which I wanted to make it. I became way more open to combining materials and processes. I didn't want to just make traditional prints anymore. I wanted to make videos and soft sculptures and slideshows, to combine objects and layer them, to print on fabric, to cut, sew, and stuff it, to cover soft forms with paint, plaster, ceramic, and glass. To me, these works still used the core ideas of printmaking; they were still prints, in a way. But I was so sick of the singular art object. This mix-up mash-up process made way more sense to me. There’s more order in the chaos.

What are the main ideas behind your work?

When I moved to LA this past fall, I decided to start working more sculpturally. I began by searching for the right materials and objects to do so, and became really fascinated by found objects. The first sculpture I made out here, ​God is a Dog, ​started with this weird ceramic dog bank that I found at my grocery store. It reminded me of my dog, Pudge, in Miami. I had a Luchador mask that was given to me, sitting in a box of stuff from home. I put the mask on the dog. It was a very simple move, but it became a really important gesture for me.

Both these objects carry so much inherent context, and so many connotations—combining them seemed to intensify their power. Where these objects were found also carried a lot of meaning. My most recent work, ​Whippets, Whippets​,​ ​utilizes a different dog form. A tattoo of the Big Bad Wolf appears and reappears as a motif across many of the works. Here’s a chart that maps what I was thinking for that show:

I think my creative process rotates where and how it begins, but I usually create works with a series in mind. A series can start with a word or a combination of words. Lately, I’ve been thinking about “educcasional,” which is a portmanteau I made from “education” and “occasional.” The ​way I use language is akin to how I use imagery and objects. Cycle, reuse, combine, return.

Other times I start a sculpture or collage with the objects I’ve found. I’ll go to Salvation Army or any other bargain stores and just look around. If something immediately jumps out at me, I’ll take it and look for its counterpart. It’s a ritual of finding objects to respond to other found objects. It’s not just a passive process of combing and rearrangement—I’m forcing objects into confined spaces and altering them in a way that feels like alchemy.

Your installations are composed with a wide rage of materials. What are the reasons behind it and how do you decide what goes together?

I’m mostly thinking about my vacuum form works here. People sometimes think that, because these objects are packaged and sealed behind a layer of plastic, I’m trying to protect or preserve them. But what's in them that’s actually worth protecting? They’re amazingly weird objects—but who the fuck owns these things? Who thought to make this spotted seatrout plushie? Why are these things even made? Who said, “I need this wooden grandpa bank for my desk”? I suppose they’re manufactured and seen as art objects, because they don't have much of a purpose or function. So I like to mix these homely, useless things with more common, and more functional objects, like an AM/FM radio.

People try to read narratives into the vacuum forms, but I see them more as portraits.The newest ones all began with my name as an integral part of the composition. Sometimes I’ll simply put signs together in a composition that can lead you nowhere. These are the most fun for me. Some are more suggestive portraits: a bowling ball cut in half, with a golf ball teapot with a beer stein and christmas ornaments. What do you read into that?

Can you tell us more about your work ​Intimate, Ain't it ​?

Intimate, Ain't it...is comprised of things you can find in a home: clothes, a quilt, room dividers, knick-knacks. I wanted the show to seem like a voyeuristic glimpse into a family’s world of belongings. I also liked the wordplay of “intimate” and “ain’t it,” because you can almost spell “intimate” with “ain’t it”—and “ain’t it” just sounds so disingenuous. The viewer plays the role of an intruder into this world of weird, private possessions, and is sort of obligated to search for meaning within them. But what can anyone really deduce from a Los Angeles Lakers cookie jar, a pack of Santeria domination powder, and a ball of yarn?

With the vacuum forms, I was trying to confuse the objects themselves: misuse them, flip them, print over them. I wasn’t trying to be precious with these things. If you had something set on your shelf and it got knocked over, you'd pick it up and put it back, right? I just left them on the floor, vacuum-sealed them, printed on them, and put them with something else.

All the drawings in the show come from photos of people’s tattoos that I found on the Internet. I saw a photo of one woman’s tattoos: She had the word “intimacy” on her stomach with an upside down Playboy Bunny logo above it, and the words “Pay Me” across from that. People compile and layer tattoos on themselves in a similar way to how I compose my vacuum forms and installations. Tattoos are a way to decorate your body or your home. The way people assemble their tattoos informed my quilt painting, ​LA Bedpages​, but I added and reassembled them in my own way. I removed the Playboy Bunny and added really aggressive dog tattoos into the painting.

God is a Dog ​reappeared in this show as an end-of-year sculpture. I combined it with the first objects I hand-made here: schematics of Santeria offering tools out of wood. Now, the sculpture became a shrine. It was a combination of everything in one, the starting or ending of a cycle. Dogs and religion make sense to me—being really young and realizing “God” is “Dog” spelled backwards....It made so much sense at that age and still does; dogs are gods. The ​way I use language is akin to how I use imagery and objects. Cycle, reuse, combine, return.

I just visited Paul McCarthy’s studio where I got to watch DADDA (Donald and Daisy Duck Adventure). When I told my friends about it, I could only describe the film as a Donald Trump-orgy-western-snuff film. I’m sitting in the theater for an hour and a half watching this completely hilariously fucked up gory scat film in almost total shock. I’m thinking to myself, I’ve never seen anything like this, but the second the lights came on I was immediately shot back to the present, and the realization that what I just watched wasn’t shit. It’s nowhere near as disturbing or gross or fucked up or anything as reality. It made me really sad.

Who are the artists that influenced you the most?

I think individual artworks more than artists have influenced me. ​Educational Complex​; ​Erased De Kooning Drawing; Love is The Message, The Message is Death; t​ hese are extremely important to me.
That being said, I have a lot of admiration for artists, the desire to be an capital A Artist is real. So real that I started a project, ​Artist Football Jerseys​, where I designed and printed personalized one-of-one sweaters dedicated to various artists. The teams/logos are from actual elementary/middle/high schools around the United States, and the years and jersey numbers coincide with what I consider important dates of the artist’s career.

Artist Football Jerseys​ is an ongoing project where people are invited to rent a jersey for a time of their choosing. If you are in the LA area and would like to participate, please reach out to me through email or Instagram and I can sign one over to you. I promise the rental agreement is an extremely reasonable, almost arbitrary, one.