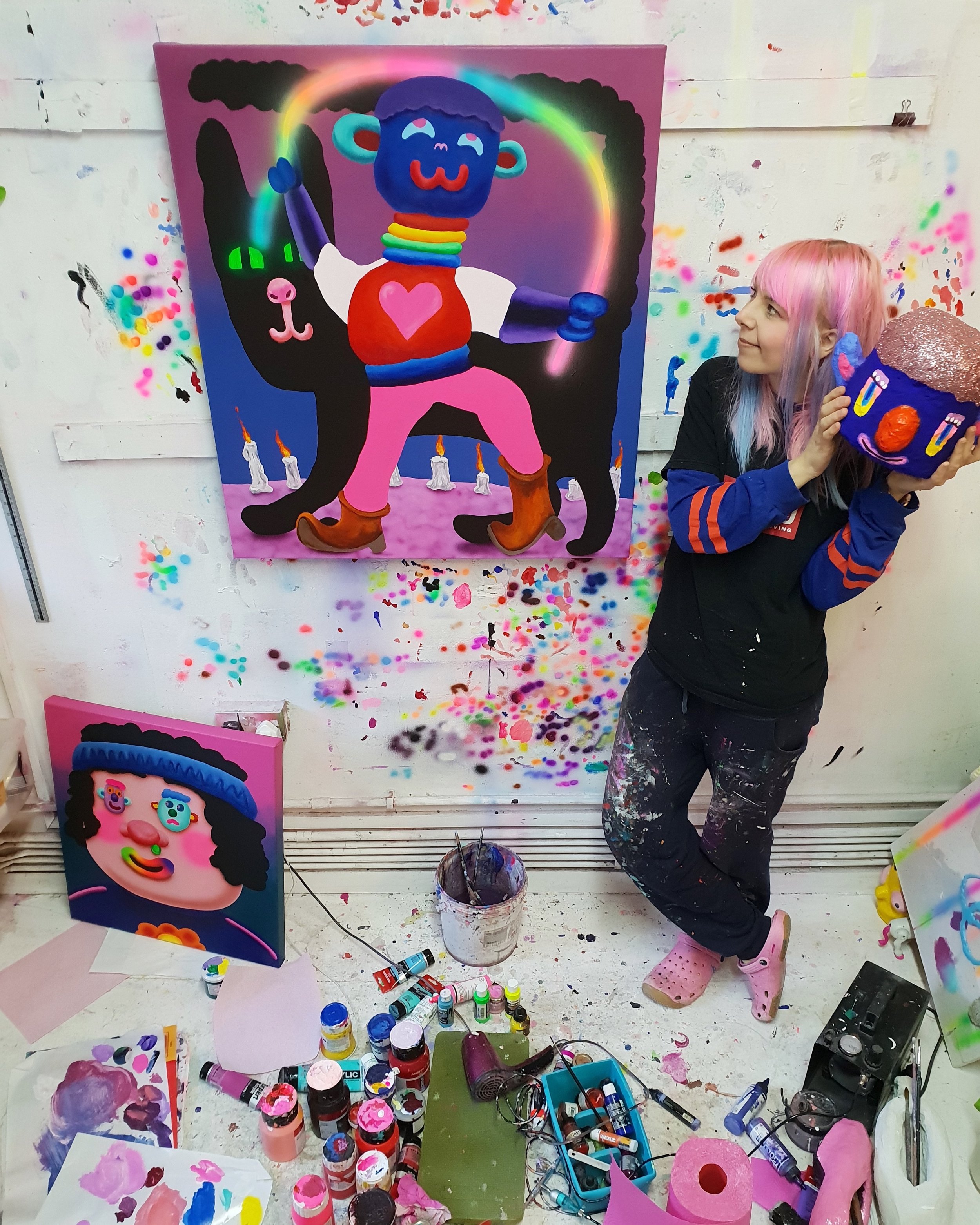 Super Future Kid was born in east Germany is 1981 where she spent the first 8 years of her life completely unaware of the western world. The culture shock that followed the fall of the Berlin wall left a great impression on her and played an important role in her love for bold colours, toys and everything joyful and playful. She attended the Chelsea Collage of Art and Design and the Academy of Art Berlin Weissensee. Since her graduation in 2008, she has shown her work in several group and solo shows nationally and internationally including London, New York, Berlin, Tokyo, Los Angeles and Miami. Employing bold shapes and colors her work explores a wide range of subjects that all circulate around certain ideas of childhood and youth and provides a platform which is emotionally engaging and gives the observer an opportunity to discover an alternate dreamlike reality of themselves.

Hello Super Future Kid, can you tell us a bit about your background and its influence on your practice?

Hi! Yes so in short, ever since I can remember I wanted to draw and paint and make stuff. Playing with toys and crafting, that was my world. I also distinctly remember that I hated the fact of growing up, I wanted to stay a kid forever. Looking at me now I think nothing of that has changed. I still love toys, drawing, painting, crafting and I still don't like the idea of being grown up, ha ha. So the way my brain is wired plays a major role in my practice and work.

Anything I make starts out as a drawing, sometimes with pen on paper but mostly digitally on my iPad. I use an app that works just like photoshop, so you have layers and all kinds of tools to draw and paint with. It also allows me to create folders, so I have a ton of scribbles, handwritten notes, and drawings on there which I sort into categories for sculptures and paintings and also into folders that are called 'ugly' and 'good' ideas.

I usually draw on there every night when I go to bed. I never know what I'm doing tho at first. I just start with blobby forms and lines that gradually morph into more defined shapes and figures. Then after a few days I go thru all the material and pick one out that I really like. The translation from digital to sculpture or painting is pretty straight forward. It's amazing how related my real life tools are to my digital tool set. They behave in a very similar way, the same goes for the colours!

You often use 3D objects as the base of your paintings, how did you come up with the idea and what rolls do they play in your works?

That's right yes. I've primarily been a painter in the past but I always had a longing for sculptural, 3 dimensional work, I just hadn't found the right way of expressing it for me yet. One day I had reached a point where I felt that a painting on its own just isn't enough for me, it felt too incomplete and I wanted to give it something that allows it to escape its 2 dimensional plane. The first support sculptures I made were 2 simple balls of expanding foam on which I had painted a happy face. When I saw those 3 together I knew I had found what I was looking for. The world of sculpting is so complex, there are so many material and methods but I love it and exploring and playing with the different techniques is super exciting to me.

What were your favorite toys and cartoons when you were a child?

Of course I was a Barbie fan I'm ashamed to admit, lol. But I was into anything you could play with really. I was most crazy for video games tho. The first ones I ever played were when I was 8 years old. My parents, my sister and I had made new friends in west Germany just after the reunion. Those families had kids of my age and of course they had Gameboys and an Amiga console with games like Super Mario Brothers, Sim City and Kirby and I was instantly hooked. The moment I saw those games on the screen I knew this is my world. This digital, virtual world that I had found there totally dazzled me and sparked my imagination like nothing else. I actually thought I wanted to become a video game designer back then, ha ha.

Can you tell us about your work Cindy Clawford?

Hm, let me see. Usually the things that I can say about a piece are very personal, since its mostly memories that are connected to it from the time that I was making it. So this particular piece was a commission. I was in Tokyo at that time when he asked me to make it, so I think a lot about Tokyo when I see that piece but also Miami because when I painted it I was planning my trip to Miami, lol. But as I say most paintings have personal stories attached to them of what was going on at that time. My work does not really exist in the realm of words, its all just visual for me.

I have to think for a moment what my (bad) habits are... I can say that I'm a rather slow person, or at least that's what it feels like to me sometimes. That means that I do a lot of slouching, gazing, procrastinating (wasting time online basically XD). I think that I deal fairly badly with pressure so I try to keep it out of my life. But I guess even tho my sloppy, slouchy slowness might seem like a bad habit I think that it also shields me from burn out. So its a bad habit with a positive effect?!

Youtube is my rabbit hole. I like spending hours watching random vids in the evening and sometimes I come across pretty brilliant stuff. For instance a series of short art and craft documentaries made in the 50s, 60s and 70s from a channel called 'British Pathé'. Some of their videos are about art made in prisons, another about William Mitchell's incredible concrete murals or one of a guy making 'interplanetary art' named Enrico Baj. Things like this make my jaw drop thats how interesting they are (to me).

What is the best advice you have been given? By whom?

I think a lot of good advice has come from Albus Dumbledore, ha ha. But no, sadly I can't remember any particular moments of good, life changing advice. I'm sure tho that there were plenty of these moments. A lot of 'wisdom' I picked up (and still do) on the go. Whenever I read or hear something and then I feel like 'yeah, that makes so much sense'. Overall it must have been a lot of 'follow your guts' and 'don't worry too much about it' stuff.

Everything and nothing I guess XD