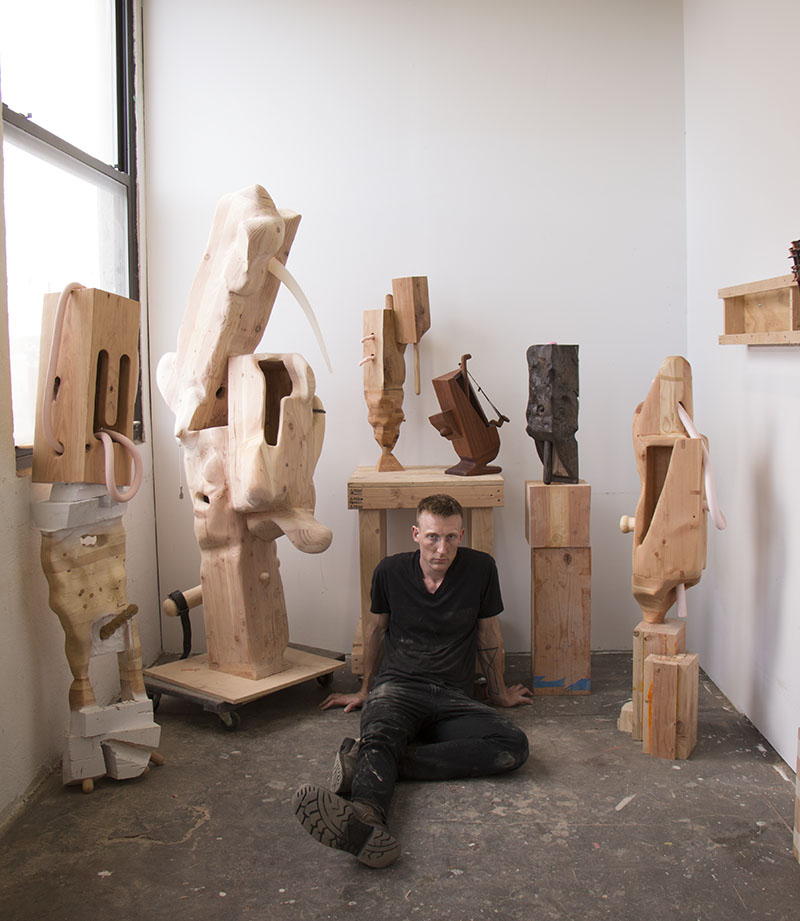 Douglas Rieger (1984), born in Pittsburgh PA, received his MFA in 2016 from Yale. He currently lives and works in Brooklyn NY.

Can you tell us about yourself and your background?

I grew up in suburban Pittsburgh born in 1984. America USA land of sugary cereals, large meaty sandwiches and gallon upon gallon of soda. There was very little art in my parents house. The one work we had was a framed poster print of the Unicorn in Captivity, from the Unicorn Tapestry at the MET Cloisters. It belonged to my mother, and hung above our split-level stair until my parents split when I was in the fourth grade. I see that poster now as a signifier for my mothers person within our family group.

The awkward medieval rendering of the Unicorn, the flora fona, and the symbolism within the image were of special importance to me as a kid. I spent many hours staring at it.
The other images I had access to were comic books and video games. Those with the help of a slightly older friend guided me into the labidinal world of images. This was pre-internet or baby internet days with dial-up AOL click clack screech connections as well as rudimentary parental blocks. So my access to understanding the adult world had to rely on my imagination and interpretation of scrambled premium late night channels. A conservative rhetoric about sexuality at school and at home let my mind run wild into unknown depths. I was a very sexual kid. I’m still fixated on sexuality and have found it even more abstract then I did then.

I was quiet, I had a few friends, I was terrified and fascinated by my peers, and I drew incessantly. I found that participating in sports teams, boy scouts, or any activity with an authority figure triggered a semi-sub- conscious action in my head. The action, which I still submit to, ends with me committing an antagonistic violation directed at the coach, leader, authority whatever and becoming labeled a bad seed. My action would not be egregious, because I’m not mean, it would simply be a way to not submit to commands made by the authority. For example: Coach asks me to throw ball to him, arm disobeys and throws ball so far over his head it ends up down hill rolling into street, everyone pissed. This would be after proving my athleticism and finess time and time again. It ruined sports for me. I would laugh anxiously. This still happens from time to time at my day jobs. When this same feeling happens to me in making an art object, the violation against what I’m supposed to do ends up working in my advantage to create something compelling. I’m still learning how to handle it, but when I feel it rising I don’t let it go.

I love reading people. Imagining a life story with no knowledge of a person aside from visual clues. Softened nail polish, canted posture, fine wrinkles at the corners of the eyes or mouth, a discreet laugh, a slow release of air from the mouth after taking a seat. I also see the way people decorate their homes as evocative of their personalities. Each object holding a specific desire within the user. The objects also holding desires of the makers. The labidinal relation between maker and user of object. Car culture and motorcycle culture have innumerable examples of this labidinal relationship. I find some of my most inspiring objects in kitchen ware, fabricators ad-hoc tooling, pet stores, lighting fixture outlets, 99 cent stores, and amateur photos of objects from individual sellers on ebay.

Your work is incredibly well made and labor intensive. What is the role of technique in your practice? Can you tell us a bit about your art making process?

Technique... .. I use wood to make figurative works. As a material it evokes a sense of familiarity and then formally I can release a complexity through it’s technical manipulation. I make each form to be simultaneously seductive and repulsive. The process involved in making each object informs on itself as I go. They start with a basic armature informed by figurative compositions I have in my sketchbook. Then through an additive and subtractive process, of carving and re-gluing, that is informed by people and objects in my current life (gunky plumbing repairs, a dog walker, rugged teva sandals, balding muscle men wearing cutoffs) the sculptures materialize. I need the labor intensive process to discover what is hidden in my head, the tedium in it allows time to reveal some strange solutions.

Can you elaborate on your interests in the relationship between industrial machines and their operators?

Relationships between machines and their operators. I see every object having a distinct relationship between user and maker. The part of the relationship between industrial machines and their operators that interests me is one of intimacy and projection of desire. The operator is repressed and the outlet for some of their repression is translated into the machine and it’s operation. The operator is repressed because of social constraints. The outlet for the repression translates into mechanical operation. When working, I see labor movement as a dance and dance as an intimate expression of emotion. The movements made when making translate into the object and give each object a personality, the machine is the operators dancing partner. Each machine and operator have different movements and create different personalities in each object. Some objects have more personality than others (shampoo bottles). Basic utilitarian objects, such as street lights, curb stops, door knobs, plug ends, plumbing valves, seem to lack personality but when traveling abroad the difference between their design is dramatic. This difference is what is most interesting to me, it appears to hold a more vivid charge than the loud shampoo bottle. In the design of utilitarian objects function plays the key role and aesthetic value is an after- thought if thought of at all, but I see the the aesthetic value as a subconscious labidinal play of hidden repressed desire translated from operator through machine into object.

Can you describe what is your studio like, and what are your daily rituals in the studio?

Studio routine, get off work go to studio pick up food on way eat at studio try and not look at instagram drink leftover coffee finish off with water put in ear buds turn on new mix found on soundcloud walk for 5-10 minutes holding chin like a Rodin sculpture thinking about next moves on work waiting from the night before. Decide moves begin work move rapidly from 3-5 projects at a time when desire to do anything lasts for more than a heartbeat make sure to do it including call mom best friend dad draw masturbate cry smoke read write smash burn paint glue erase transform exfoliate trip recover repair.

My worst habit is looking at my phone or being on the internet too much. Screens can really numb my brain. I have found that if I’ve checked facebook/instagram more than twice in 10 minutes I’m in real trouble. Reading writing and drawing more are always my goals. I will schedule myself places that take an hour long subway ride just so I can force myself to read and write. The library also helps. Slowing down is so necessary.

What are you working on these days?

Right now I’m trying to develop a series of wall works, I’m also working on an idea for inflatable sculptures, and I really want to get my drawings up to a level where I feel comfortable showing them. I also have a video script, and a photo series, and maybe a performance. I really want to find a method to really reveal myself in a performative work. OH, and a bunch of smaller scale wooden sculptures, and big ones. I just need to get rid of this day job thing that takes up 40 hours a week.

For more of Rieger: douglasrieger.com