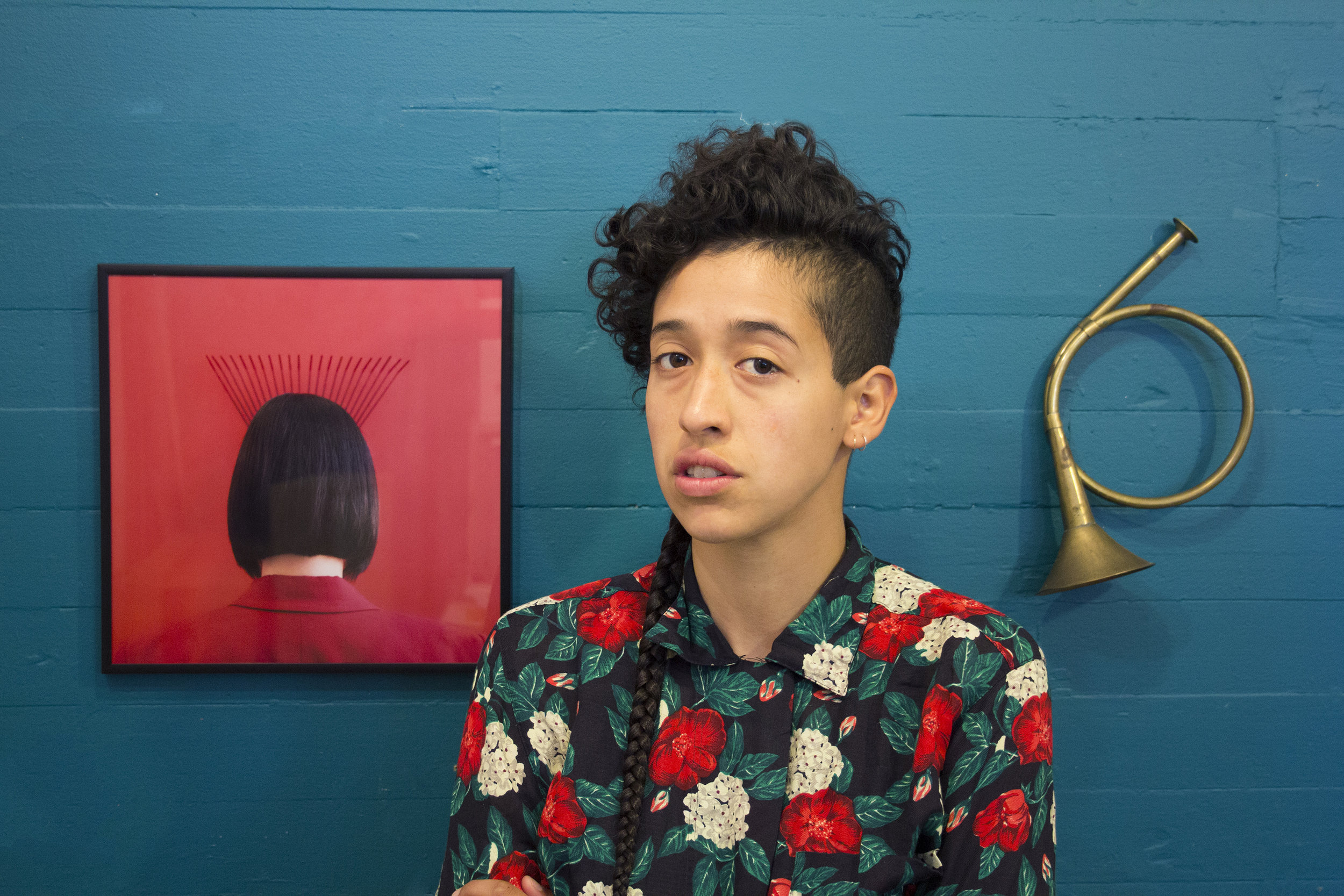 Marcela Pardo Ariza explores the relationship of wry humor, queerness and representation through color sets and prop-like objects. Her photographs incorporate quotidian objects in seemingly absurd ways creating tableaux that mix recognizable elements with magical realism. Pardo is interested in the action of looking within the theatricality of “the set” and her visually provoking portraits seek to explore metaphors regarding race and gender.

Can you tell us a bit about yourself and your background?

I was born in Bogotá, Colombia, in a household of theater practitioners. Looking back I can definitely see how my practice was influenced by my parents’ use of simultaneous playfulness and criticality. I left home when I was 16 and since then I have moved a lot. I even lived in Indiana for 4 years, which definitely influenced my views on representation and stereotypes, and the way I think about engaging different audiences into my work. I lived in New York for a couple of years after that, and I worked in different artist-run spaces which showed me the potential of experimentation, collaborations and the role of the artist as a curator. Three years ago I moved to San Francisco to pursue my MFA, and was able to develop my artistic and curatorial practice even further diving into issues of hybridity and diaspora.

Can you talk about the Paranoia series, and the way you approach surreal imageries?

When I was growing up I was surrounded by a collective sense of paranoia. It became pretty evident to me that this fear towards one another was structurally prevailed and emphasized in order to control the collective potential. Mundane public interactions often have an sceptical tint and it seems that fear –or violence– is targeted to those who are misrepresented in mainstream visual culture.

Paranoia is a result of images and stereotypes provided from those who are in control and in power. It’s a way for individuals to feel vulnerable and powerless. It affects the way we move through our space and it debilitates our ability to deescalate conflict.

Building sets has become a really empowering part of my practice. I get to design the space in which a story happens and it allows me to portray scenarios and interactions differently, in a way that hopefully makes us reconsider our collective and individual imaginary.

You utilize some sculptural objects as props in your works, what is the process of making the objects and staging the photographs?

A lot of my work deals with the tension of subject and objects, of subjectivity and projection.I intent for the subjectivity of the viewer to manifest in the object I use… So in a way, I enjoy creating objects that facilitate this theatricality and sense of relatability/identification process.

I enjoy breaking the ontology of objects and questioning their function.Thinking of objects in an anthropomorphic way opens a whole realm of possibilities. It allows the pictures to be about the viewer's perception of the prop and the way is behaving in the set. I collect some of the objects in thrifts stores and friends’ houses, but I really enjoy the process of altering the object so that it becomes the prop for a particular set.

What is your process of choosing models?

I usually work with friends or artists that I’ve met. There are certain individuals who I meet and think of a set for them rather than the other way around. In my latest work, I’ve moved towards fragmenting the body to hide the models’ subjectivity and question aspects of visibility and scale.

Yes, we all do! I over book myself all the time.  I have to schedule my studio time very strictly otherwise I end up seeing more art than I’m making.

Yes, I’m working towards a solo show at R/SF Projects in September. For that body of work, I’m distilling particular emotions that I associate with our political times. It’s a very broad mission and I’m not sure how successful it’ll be, but I’m digging into resistance archives, and creating scenarios that hopefully will make us dive into our most recent collective and individual sensations. The array of emotions and the speed to which we experience feelings seems to have accelerated but despite all the images we see daily we don’t have a visual language or representation to deal/process them all… We’ll see how it develops!

For more of Ariza: marcelapardo.com