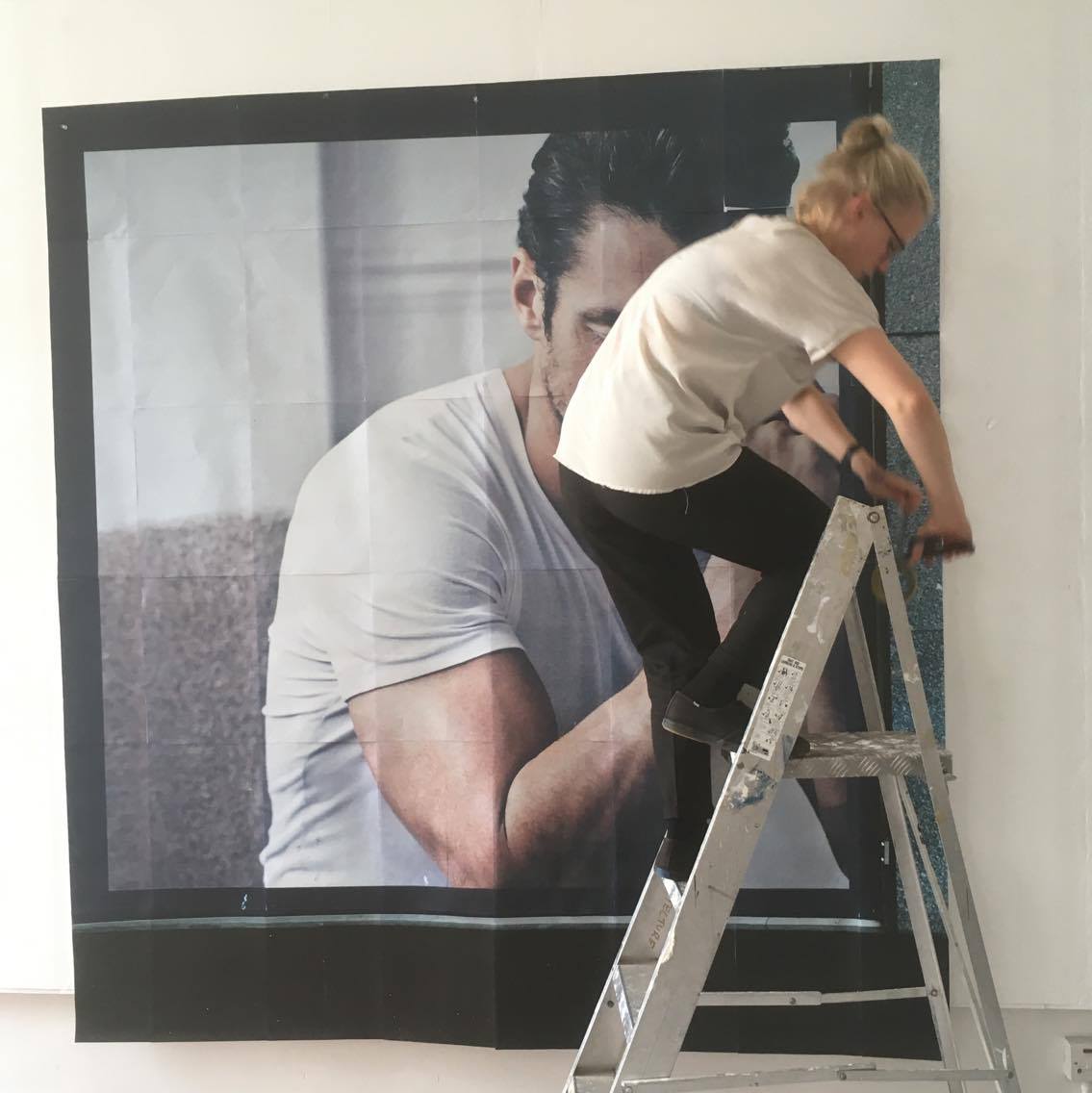 After studying Photography and Media at the Fachhochschule Bielefeld, Germany, and the Bezalel Academy of Art in Jerusalem, Israel, Anna Wachsmuth worked with photographers and artist such as Daniel Josefsohn and Alexandre de Brabant in Berlin. In 2015 she started a Bachelor of Honors in Fine Arts at the Glasgow School of Arts which she finished this summer with a first class degree. She is the founder of Salon 16, a cross-disciplinary platform for the discussion on contemporary arts in relation to its social and political accountability, and self publishes little publications and fanzines such as "HalfHaiku".

Hello Anna, Can you tell us a bit about yourself?

Hello and yes! I grew up in a rather small town in the west of Germany, with more interest in politics than in arts. In 2010 I began studying photography and media at the Fachhochschule Bielefeld, as I thought I could combine political concerns and activism and an interest in arts and the creation of images rather than just studying Fine Arts. During that time I went for an exchange to the Bezalel Academy of Arts in Jerusalem, which influenced me deeply in my work (not the school but being in Jerusalem), as Israel and Palestine and Germanys relationship to this conflict continuously reappear in my research and practice.

I was struggling with the forms of representation and (re-)creation of stereotypes and preconception through photography and my own work as a photographer, so I moved to Berlin and worked as a photo-assistant for Daniel Josefsohn and Alexandre de Brabant to get a foot into more commercial editorial photography. Of course that wasn’t too successful or helpful either, so I decided to finally study Fine Arts. I decided to do that in the UK, since I was quite fascinated by the open and involving art scene I experienced in Belfast during some internship and work over there. So in 2015 I started a second, Bachelor degree in Painting and Printmaking at the Glasgow School of Art . I am not quite sure how successful that was either, but I am planning to continue studying different fields and try different methods of research.

You combine sculpture, photography and video in your installations, can you talk about your thought process of choosing the material of the objects and the imageries of photographs and videos?

I think, every installation or project starts differently, but usually with an image that strikes me. This could be an image that originates from a reference towards a particular event or a certain situation or a picture I come across in news outlets, social media or even advertisement.

The use of big but rather low quality, pixelated, found footage photographic imagery, printed cheaply and sticked together even cheaper is a comment on the state of photography and results from my debate with photography, the vast amount of imagery available to us and the hierarchy of imagery regarding the author, placement and production. I am interested in the effects the accessibility of crudest content on the web has on us, such as beheadings, drone flight footage of Syria by Russian military and live streams of military operations in Afghanistan mixing into the everyday documentation and creation of the self through social media. What intrigues me is the shift of hierarchy within imagery and what it does to us.

But overall I would say the form follows its function. I always have a thought or an idea I want to illustrate or depict and then I have to work out the most suitable way I can bring my thought across. For example, for the sculpture ‚Seven Rocks‘ I cast rocks used for a kids game into rubber and the rubber coated steal bullets used by the IDF into concrete. This was to play with the symbolism of uprising and suppression and to comment on the power balance within the Israel-Palestine-conflict.

Can you elaborate on your interests in the construction of identity and culture and their relations to the colonial structures?

I think it is very important to consider how much influence the social and cultural environment of our upbringing has on us and our function within society. Be it language, privileges, inscribed perceptions and understanding of realities (e.g. systems of science, economies or basic human interaction). These conditions are often underestimated as it doesn’t effect the broader public negatively in most cases. These privileges and inequalities are deeply rooted in (historical) colonialism and colonial behavior performed until today. This affects our ways of living, the use of language, forms of oppression that take place in everyday life, of course more visible for the oppressed than the oppressor.

My last work ‘Reise nach Jerusalem’(Journey to Jerusalem) concerns itself with the power of naming and the unreflected use of terminology in certain social and cultural contexts which create and negate identities and peoples histories and experiences. People with an upbringing in Germany pass the video of my installation showing people playing musical chairs identifying it as ‘Reise nach Jerusalem’. This is the German name for the game, which most likely traces back to a lack of space on boats from Europe to Palestine, (now Israel) during WWII and earlier zionist movements as reactions to antisemitic prosecution. This twisted almost perverted notion of naming a game after an experience of fear, danger and death of a certain group of people finding its unreflected way into ‚fun activities‘ for kinder gardens, elementary schools, and even drinking games at weddings is a rather crude and ignorant use of terminology regarding history of Germany.

I think it is very important to point this implicitness out in order to create an awareness of the effects of historical actions feeding hierarchies and how they are kept up for example in language and titles fortifying discriminatory behavior in simple things as calling a fried piece of meat with paprika sauce a “Zigeuner Schnitzel”. (Zigeuner is a foreign appellation broadly used in German society to describe members of Sinti and Roma in a rather discriminatory manner often linked to a notion of negative properties manifested as/in stereotypes and only reflected on within the German society within the last 5 years)

What is your research process like before you start a new piece of work?

It is a lot of reading, a lot of looking through imagery and going back and forth between different sources, topics and thoughts. It is not very developed or systematized, even though I am quite obsessed with the organization of notes, thoughts and material. It is important to me to talk about the different stages with friends, since I easily get lost in my own perceptions and lines of thought. I find it very important to verbalize ideas in order to find out how it is perceived and understood by different people since my social circle and point of view gives me a certain limited set of thoughts and experiences. So an exchange and discussion is very crucial to my practice in order to reflect and include a broader perspective on a certain topic than just my own.

I am also quite obsessed with getting lost in the internet as a source or a ‘democratizing’ tool that produces all kinds of knowledge, facts and truths and opinions. That can often be confusing and time consuming, but I find it quite important to regard different notions and systems of information to question long-established hierarchies in the production of facts and truths. I don’t want to leave the impression that I am into conspiracy theories and chemtrail interpretation, but I find it interesting to consider where that interest and debate results from and the effects it has on our society.

Do you have any bad habits, and if so, do they affect your work?

Of course I got some. I think what affects my work most is that I am very critical of my environment, and mostly myself. Therefore I developed an intense research to back up my work and to make sure that I am well informed before I present a certain project and topic to the public. And after doing all that research it feels like I need to share the information that pilled up on my desk, preferably in form of a little publication since I paradoxically don’t like talking about my work in the context of an opening that much. It always feels wrong to squeeze all the background information into three sentences in between drinks and pretentious chatter about the great choice of colors or arrangement in the space.

But quite often me getting lost in research results in many projects and thoughts being dropped due to a lack of time or the project taking different turns than intended or expected in the beginning. If the thought was good though, it will reappear. Its like the projects need to survive time to proof they are worth executing them.

I just finished a small exhibition with my friend Arne Wern, which was a good practice for a not so heavily researched and more intuitive and playful approach. But I am researching for a project that goes further in the direction of game and play in the context of conflict. I am trying to find funding and maybe some sort of collaboration. Furthermore, I would like to develop my practice into a more collaborative direction to open the way for participation of different kinds.. In my opinion this develops more depth regarding different viewpoints and backgrounds, so I am researching forms of participation and creating more of a set for people to discover a certain topic rather than a final piece of work that is produced by an artist in order to be digested by an audience. This is probably something I have to work on next to the development of more concrete bodies of work. But theres a long list…

For more of Wachsmuth: annawachsmuth.de