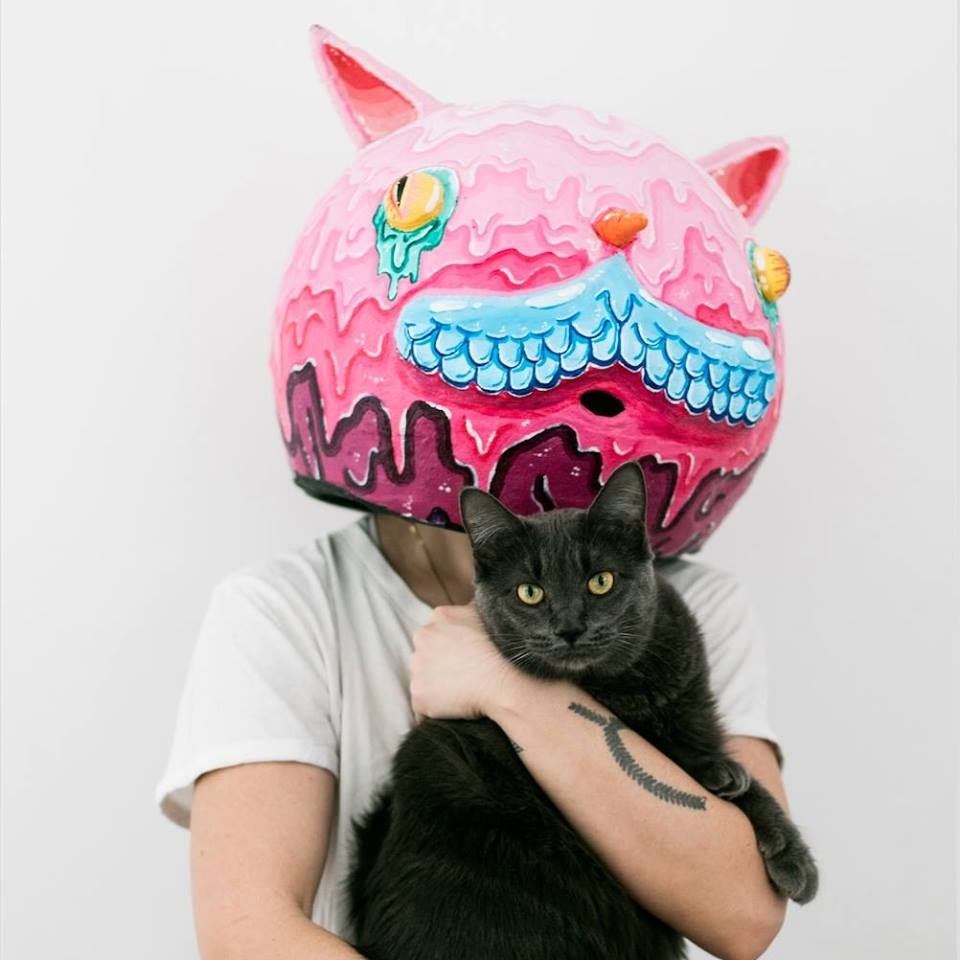 Vicky Healy has a BFA in sculpture from the University of Hartford Art School and almost has her MFA from The School Of Visual Arts. She lives on the noisiest corner off Flatbush Ave with her two cats and plants and is a co member of the fictional band Blood Rug that has yet to release its album.

Could you tell us a bit about your background?

Growing up I was the definition of a tomboy and loved anything that was naughty, dangerous, scary, or weird. I grew up in the suburbs and when I was 8-9 years old I would lay down in the middle of the 4 way stop sign intersection in front of my house and wait for a car to come, just to cause a scene. The idea of getting hit by a car didn't cross my mind but doing something so wrong was enthralling. I also have this strange memory of a woman named Barbara, who worked at the general store near my house. Whenever I would go in there with my mom or dad she would give my brother and I free lollypops. Whenever she turned around I would get a glimpse of the face that grew on the back of her head. No one believes me but I know what I saw. I also used to have a real dinosaur egg which I found in my backyard and kept on a shrine in the bushes. My neighbor Laura was so jealous that she stole it. When I saw it was gone I knew it was her. That day I stole it back. This went on for a whole summer. These memories are more important in understanding me as a person than talking about my parents divorce or how my guinea pig died.

Maybe I should also talk about how I became an artist. My uncle is an artist with a really cool house. I really admired him because when I was about 12 years old he let us do things like shoot bottle rockets down the street and put fire crackers in my cousin's bellybutton. He had three pet dogs and all the 90's video game consoles. I thought, being an artist is the coolest thing anyone can be. I thought it was his job to never wear a work outfit and always have fun. I was really inspired and after I came home from a visit I just wanted to try painting something. I got some house paint and on the back of a picture frame insert I painted a little blue man being eaten legs first by a green monster. After that I spent hours every day after school for years teaching myself how to paint and learning how paint. I wasn't interested in taking a class to learn how to be an artist. I just wanted to do it myself.

What are the concepts behind your works?

To explain what's behind my current work, I have to start off with Donald Trump. Imagine you're going to get married next week and it's all you have ever wanted. Your soon-to-be in-laws call you the night before the wedding with the horrible news that your almost husband is dead… because after getting too drunk at his bachelor party he tried to have sex with a horse and it accidentally killed him. This is how I felt when Trump got elected. Embarrassed and confused and also very sad. Since then my work has changed. I became less interested in making zines about cats who can’t catch flies and am now focused on our future. More specifically, on creating a trailer for a movie about a dystopian future set in the year 2167. Here, everything and everyone lives in a government regulated mall full of complacent humans.

When the world turns on its head, it wakes you up. You might realize the magnitude of corruption and delusion in our society. I think about how people spend too much time watching TV, eating horribly unhealthy "food", slaving at their jobs for the sake of material gain and how our monetary system creates an impossibility of real freedom. Lately I have been exploring my perspective on our likely inevitable future. My ongoing body of work has to do with living during such a dysfunctional time period and how people are too happy being obliviously comfortable.

Imagine living in exquisitely designed complexes that have become so multi functional people won't even need to leave their rooms. In this world you can snap your fingers and food will shoot out from the bottom of your iPhone 200XX but of course there are tradeoffs. For example, you won't be able to fathom what a blue whale is or was.

You created an unique fantasy world in your studio space during 2017 SVA MFA Open Studios, can you tell us about your studio installation?

The physical space that I create in my studio is always a tangible representation of what I am thinking or feeling. Although I exist as a human being in the real world, that's is just my shell. Stepping into my studio would be equivalent to reading my journal. At the moment it feels as though you are aboard a yellow spaceship with a death hole in the middle of the floor surrounded by colorful buttons and shapes that control nothing. As you look out into the deep space horizon a video loops on a floating white box between a parody video I created with a DealDash.com commercial and me dancing, dressed as one of my alter egos, Buzzlightqweer. A year ago you would have been floating through an intergalactic space pocket surrounded by giant colorful tongues. Even though my studio space transforms in appearance the various iterations tend to feel like parts of the same world.

Your practice includes painting, illustration, sculpture, installation, video, and tattoo design. Can you tell us your process of selecting medium and how you manage to convey your unique style cohesively across all medium?

When I choose a medium I try to be pragmatic but more so it's a natural emotional decision. When you're the type of artist who takes a dip in every pond it's easiest to pick whichever one looks the clearest and warmest that day. If I paint too long I miss sculpture. When I'm tired of breathing in resin and wood dust I miss video. When I’m tired of sitting on my ass all day editing then I want to go out and put up street art. I consider my relationship with art to be the most important sexless relationship that I am in and I try to pay attention to all the aspects of it the way you would in a real relationship.

I also think anyone who teaches themselves how to do something will develop their own style. I purposefully didn’t take painting or art classes in my free time so I could avoid feeling manufactured or shaped into someone I wasn't naturally inclined to be. Like all artists my style developed over time. I also tried to not let the world suck me of my powers. I tried to first impress myself with my skills and once I did that I naturally developed confidence as an artist. It doesn't always matter how good you are. I have been to some shitty art shows, but all these people have one thing in common and it's confidence in what they are trying to sell and tell you.

What is the difference between your life as an artist in Connecticut and in New York City?

If there is anything I have learned since moving to NYC its that there is no handbook for being an artist right now. Yes there are formulas people have come up with that are supposed to help an artist figure it out. They are trying to teach me that in school right now. But the more I hear about the rights and wrongs the more I feel like throwing it all out the window and screaming. I love New York but the problem is all the talent is piled up into one area. We all live on top of each other like a rat king, trying to stand out when we are all stuck together. You have to ask yourself what top am I trying to get to? Is it getting to the point where I make so much money that my dream of getting to stay home and make art all day will just be magically be funded? That doesn’t really exist anymore.

Connecticut is in love with with me but I’m not in love with it. Actually as it gets closer to the spring and my lease is up the same time as I graduate I am deciding where to go next. New York isn't going to give me the bang for my buck I need right after school. The idea of living here and hustling 24/7, leaving little time for actual art making and even less time to give my cats, girlfriend and self is horribly unappealing to me. I can make art anywhere. I don’t need to be in NYC or CT anymore to do that.

Yes. I have bad habits, everyday distractions and things that make it hard to work. Like my girlfriend Catherine for example. She is also an amazing artist but has an important, fancy job in the design/fashion industry and doesn't have enough time to enjoy life. If there is any moment that she is free I will most likely not be making art unless she is doing it with me. Also my cats, Moo and Lemon. They are probably my number one day-to-day distraction. I treat them like they are my actual children who just won't grow up or turn into humans. We have learned to verbally communicate with each other and for a short stint in the summer of 2015 they truly saved my life. I am going to also admit something here… I am an avid Pokemon Go player. Catherine and I play every weekend and if I am at school in the middle of something and there is a Pokemon down on 7th ave and 19th street I want, I will drop everything I am doing to go catch it. Also if its nice outside I will not go to my studio. I have more bad habits but my parents might read this. Let's just say lettuce is my favorite food.

For more of Healy: vickyhealy.com