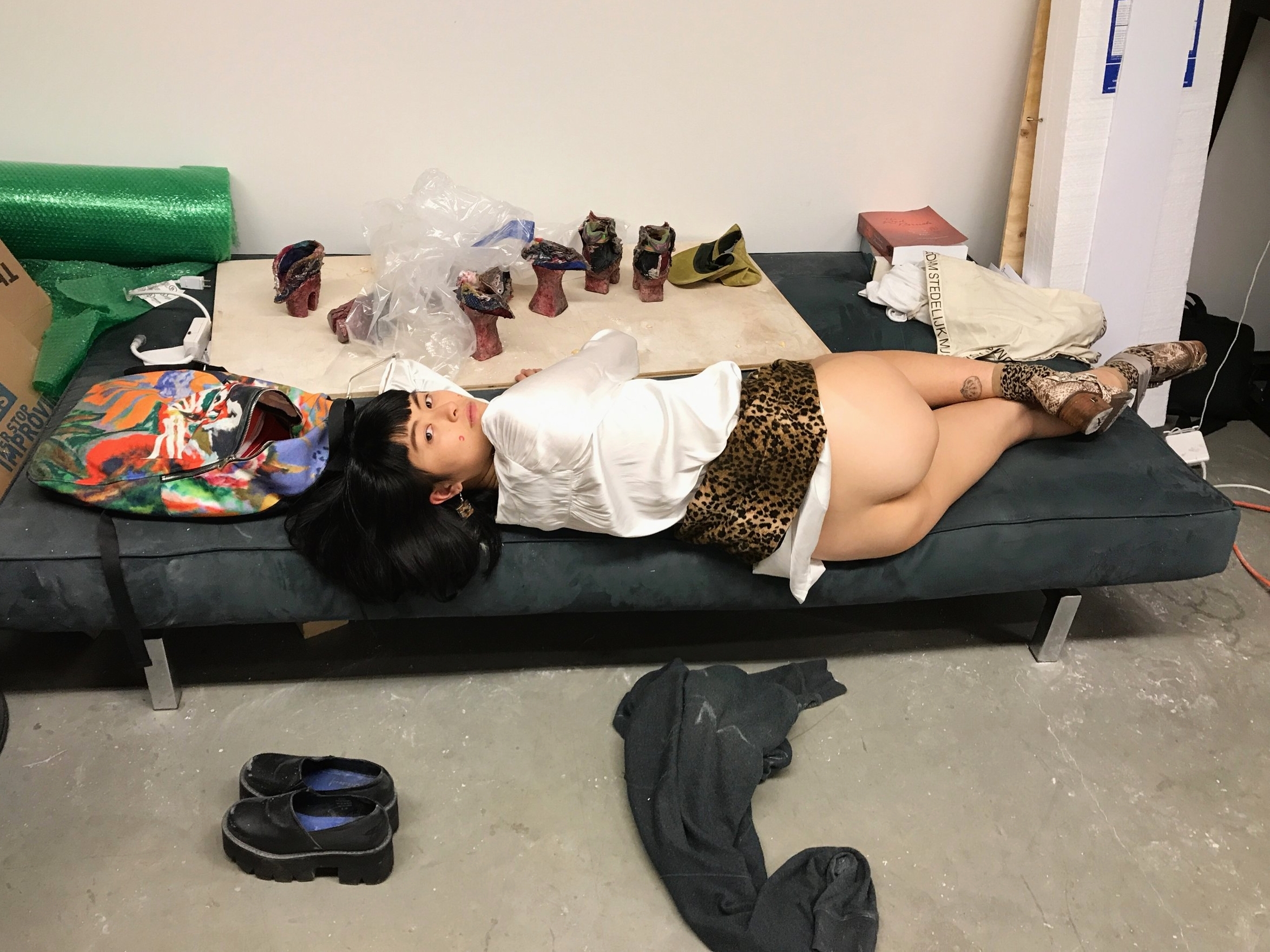 Catalina Ouyang is a sculptor, writer, and interdisciplinary artist. Her writing has been nominated for two Pushcart Prizes. She is an MFA candidate in Sculpture at Yale University.

Could you tell us a bit about your background and  your art practice?

When I was seven, my Chinese parents upgraded our family from a white trash cul de sac in nowhere, Illinois to a development of McMansions in New Jersey--previously a white community, now being taken over by upwardly mobile East Asian and South Asian immigrant families. A neighborhood without sidewalks. These families all aspired toward the treacherous notion of the American Dream, flying flags outside their front doors to demonstrate their patriotism, pretending to like hot dogs, sending their kids into the fucking Girl Scouts and Boy Scouts, this was the period right after 9/11. Nothing about this is special or illuminating, you can read anything that Jenny Zhang has written about growing up Chinese-American. My life in that place was financially comfortable, if emotionally taxing (my mother raised me and my brother as a hysterically overworked single parent), insular and alienating because my town was the kind of artless, babymaking place where everybody is racist and no one has any desire to leave. Lacking context, I didn't feel distinctly mortified by this middle-class suburban landscape until I landed, on full scholarship, at a wealthy private university where most of my peers were private-schooled children of CEOs, diplomats, lawyers, architects, renowned academics, the owner of Comedy Central, Mikhail fucking Baryshnikov. Everyone had some famous or high-achieving parent and everyone's mother was charming, ageless and well-dressed. If they weren't stupid rich, they were cool and cultured. Like, these were kids who really had all the means to mosey their way into Ivy League schools but still managed not to. Meanwhile my mother, a nurse who worked with HIV/AIDS patients in Newark, exhaustedly zoned out to TMZ after work every day. We shopped discount racks at Kohl's and eating at TGIF's was a treat, etc.

I don't wish that I had grown up among the cultural elite. In fact my parents had led extraordinary lives, surviving a childhood during the Cultural Revolution in which both their families were targeted and torn apart, and they somehow made it out in the 80s and moved to Chicago where they barely spoke English and knew nobody and built a new life, living in a Little Italy tenement with newspaper windows. My mother waited tables by the Sears Tower and one night her table was Mick Jagger and the Rolling Stones except she had no idea who they were. Anyway. My parents had this incredible journey and in the end my father disappeared back to China and my mother ended up saddled with two kids in the wretched depths of suburbia because pop culture and ancient culture told her to make a certain set of decisions which she did and they defeated her. Neither liberation nor enlightenment ever came to her. It was a long, sad deflation. The other facet of my upbringing is that I spent three months every summer in China with my mother's parents until I was in high school, which means that I spent about a quarter of my childhood there. But I still speak very little Mandarin. I never felt at ease in China. So my background is split between American middle-class spiritual death and a series of stunted interactions with my motherland and its attendant culture. What I think this all means is that I experience the world through a perpetual series of mediations--as everyone does, in some way. Everything I know has come filtered, in translation and wrapped in plastic, on a bootlegged DVD, smelling like Buddig lunch meats (the best lunch meats ever). I don't believe in the sanctity of most things and I don't really believe in redemption. And I believe that in the face of ecological collapse, humanity has no right to seek another planet to colonize. But sometimes in my work I play-act some possibilities of change.

What are the concepts behind your work?

I'm trying to use fewer buzzwords when speaking about my work. My usual crutches: myth, dismantle, subvert, heteropatriarchy, whiteness, resistance, healing, intersectionality, reclaim. More and more I see language as a treacherous thing that fails, and I'm still not sure what to do about this.

Throughout my recent work there are traces of female “villains," villainhood so often being a coded way to refer to strong, abused or Othered women. Witches, chimeric beasts, dragon ladies, demon girls, undead girls. They are both character and ontological framework in my practice. Ocean Vuong wrote about his mother in May 2017: "a monster is not such a terrible thing to be. From the Latin root monstrum, a divine messenger of catastrophe, then adapted by the Old French to mean an animal of myriad origins: centaur, griffin, satyr. To be a monster is to be a hybrid signal, a lighthouse: both shelter and warning at once."

I'm taken with the potential of art, like a mother, being both shelter and warning. Bracha Ettinger says that art "[trusts] in the human capacity to contain and convey its rage and its pain...It is to trust that we will be able to bear in compassion the unbearable, the horrible and the inhuman in the human." I have heard my work described as both vengeance and refuge. I hear often that my work is "personal" but I don't think it is. Nothing ends at personal, because people are not unique. I create a thing that unravels from some rage-filled point in my experience, or an ugly collective fact, and its thread extends to a conglomerate of historical bodies in space. I don't substantively believe in ghosts but I like the idea of them.

I think, write, wring my hands, dream. Many of my favorite works have come to me in a state of half-consciousness, like a vision. That sounds borderline religious though I don't mean it to. There's a lot of waiting. I'm not a doodler and I don't like wasting material or energy. At a certain point I make. I love working with my hands and with my body. I'm no good with power tools or in a shop--I have refused to use a table saw since losing a chunk of 3 fingers in a kickback accident three years ago, because I suck--but I've developed my own methods of making the shit out of things. Trade secret.

Is there anything you've read recently that you find inspiring?

Most recently I've read/revisited: Muriel Leung, Bone Confetti. Alice Notley, Desamere. Ching-In Chen, The Heart's Traffic. Francine J. Harris, Play Dead. And a book called Women Who Run with the Wolves which is new-agey and psychoanalytical, two things I narrow my eyes at, but it has a lot of rich content about cross-cultural mythologies surrounding women. It's comprehensive and fascinating, sometimes moving. For some time now i have been vacillating between the pared-down nihilism i've held since childhood, and a desire to conduct myself in a more...spiritual (?) way. I distrust both Western medicine/pharmaceuticals and the traditional Chinese medicine that my parents sometimes buy into, but a part of me wonders if it wants to believe. I both do and don't subscribe to astrology and notions of energy and karma, etc. idk. I'm a skeptic but I'm a skeptic with a lot of love. I'm still figuring it out.

How do you title your works? What is the relationship between your work and its title?

Titles come to me when they are ready. I wouldn't call myself a writer, but in the past I wrote with some degree of commitment, mostly lyric prose, so that bleeds over. Titles and material lists are integral to reading my work; I see them as an opportunity to steer an otherwise uninformed viewer so that some degree of my intentionality comes through. Because yes, I can be a control freak, because yes, historically women and POC have been forcefully misinterpreted, their meaning derailed.

I won't say too much about this project right now, but since early August I have been inviting hundreds of writers to create poetic translations/appropriations of my Title IX report, in which my undergraduate university found my [white, male] ex-lover "not responsible" for raping me. Ha. I then take all the generated content and re-translate it through objects, installation, performance and other platforms. Somehow I'm tying it to the founding of Rome and the mythology surrounding Romulus and Remus' violent conception/upbringing. The whole thing has grown organically. I can't say I'm excited about how it's ended up fitting into the zeitgeist of #metoo, a phenomenon I'm apprehensively happy but also deeply cynical about. This project, as I conceived it, is not a piece about rape, or about my own experience, which was harrowing but unspecial. It's about language and its potential for weaponization, it's about collaboration and gift-giving. Maybe in a way it's about love. But most importantly it charts symptoms of how power is objectionably wielded and distributed, and what/who always ends up as collateral.

I don't eat regularly and I sleep either too much or not enough. I haven't exercised in years and my lungs feel it. I overthink things. I waste time on Instagram. I talk a lot of shit. Talking shit is often a productive critical exercise--it keeps me honest and hones my ability to reflect on my own work--but it is of course "toxic."

For more of Ouyang: catalinaouyang.com