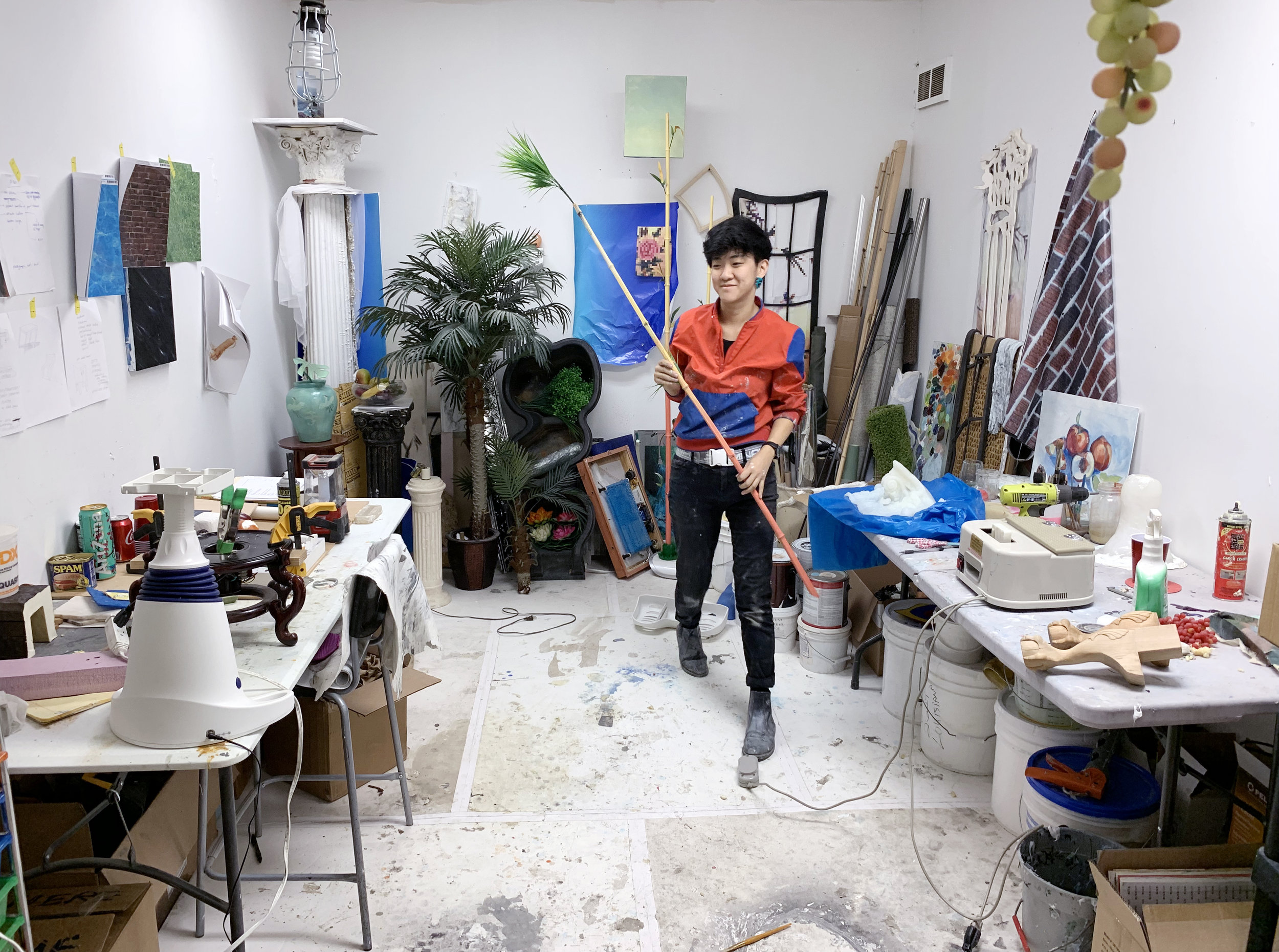 Rachel Youn is an artist living and working in St. Louis, MO. They use sculpture and new media to poke fun at hierarchal narratives embedded in objects and lifestyles. Sourcing from home furnishing stores and oriental goods peddled on craigslist, their work collapses notions of authenticity and artifice through the lens of identity.

Hello Rachel, can you tell us a bit about your background and your art practice?

Hello! My background is a series of cuts and pastes around the United States. I’ve lived in Philly, Junction City, KS, Kansas City and Knob Noster, MO, and ended up in Albuquerque until I went to college. I grew up in cramped apartments plagued with the love of shame and tradition. My father is a Southern Baptist pastor and eagerly filled our homes with Christian memorabilia, Hobby Lobby statuettes, military-themed RC toys that remind him of his time in the Korean ROTC, stacks and stacks and STACKS of newspapers, and much more. I felt like my dad needed to display every single thing he owned to convince himself he was rich, cultured, and a contender for the American Dream. I totally get it, but the salon-style clusterfuck of kitschy replica objects drove me a little nuts. Anyway, my decision to study art didn’t go over too well. My dad had the idea I would go into either ministry or the Air Force (????), but here I am! I’m now kicking it in St. Louis, MO, my home for the time being.

Moving around a lot and adapting to new environments left me feeling like a tabula rasa. I was never really surrounded by people that looked like me, so my immediate survival instinct was to adapt to my surroundings. I actively rejected anything “ethnic” about myself in order to feel like I belonged to the dominant (read: white) culture. I felt like a copycat or a fake and I never knew who I was or what I actually liked. I think everyone is guilty of this to some degree but I really judged myself for it. This sentiment runs through the undercurrents of my work.

What are the main ideas and concepts behind your work?

My work celebrates the inauthentic. I identify with the cheap alternative, the generic, the replica that tries so hard to appear like the real thing. I love souvenirs, discount home décor, marble and wood veneers, column pedestals, desktop fountains, fake plants and fruit, natural history dioramas, theme park designs. I’m enamored by really anything that people buy to decorate their suburban homes only to sell or throw away a few years later, and significant part of my “research” involves browsing for these items for hours on craigslist and Facebook Marketplace. I really ran with the realization that everything is in fact fake and constructed, whether that’s the rustic look of Hobby Lobby décor or the architectural style of the White House or the parks designed to save a slice of nature for ourselves in a time of rapid urbanization. I’m inspired by moments where the effort to represent nature or wealth manifests into something totally absurd. Although my work pokes fun at this phenomenon, I’m really not casting judgment! I just think it’s a funny thing we do. I can’t even begin to suggest what is truly an authentic thing, place, or person. All I know is that identity is plasticky and people mold themselves time and time again for reasons both political and personal. I hope to make things that both acknowledge these shortcomings and also somehow feel sincere.

You masterfully combine soft and rigid materials and sometimes warp the shapes of everyday objects, what is your process of choosing materials and how do the materials relate to the final object being made?

I like to take everyday objects and remold their structure, rigidity and symbolic power into something gooey, soft and vulnerable. When you transform an object’s material and take away its function, it is a failure. However, I like to believe this failure is an active resistance against expectations of function or performance. I use silicone as both a molding and casting material and replicated a neo-Classical column. The result was an impotent, sad looking thing that was meant to be a dig at the way architects, designers and decorators employ it as a symbol of antiquity and Western ideals. However, it took on its own anthropomorphic life—it really has the weight of a body and the silicone gives it a synthetic, flesh-like tactility. I like making soft sculpture because it gives the objects personality: one of laziness and dejectedness that I look at and say, “Dude, same.” I also made an oriental-style folding screen out of the same material, an object I’ve found in both my grandmother’s house and also IKEA, Amazon.com, Home Depot, etc.

When transporting these soft pieces, I find myself fighting them—dragging them across the floor, slinging them over my shoulder, shoving them into my car or in a corner of my studio. I mentioned this to a friend of mine and he pointed out that because these sculptures are soft, they are far more resilient and can take the abuse whereas rigid objects would only break. I thought that was really poetic.

Some of your work is kinetic/interactive, can you tell us about your decision of incorporating movements into your practice?

I love sculptures that move! They have such a lively and endearing quality that naturally extended into my work. I was drawn to massagers and how the minimal movements they produce are meant to emulate hands or fingers pressing against flesh. Plus, there seems to be a plethora of them being sold online secondhand, which I think speaks to the relative short lives they have in people’s homes. One day I drove out 30 miles and bought a shiatsu foot massager from a middle-aged woman in the suburbs and immediately took it apart to study how it works (while admittedly shocking myself a few times). I never got far enough in school to understand kinetics (I was an art kid, after all!) so I was fascinated by how something simple as plastic gears could suggest a human touch. I’ve been attaching fake plants to these motors and letting them do their slightly erotic but ridiculous dance. One time I went to the Missouri Botanical Gardens and was mesmerized by a gently swaying palm plant—then I realized I was inside a climate- controlled dome and the plants were in fact being moved by airflow coming from a nearby vent. That moment really stuck with me.

Plenty. I only work at night, I spend too much time on my phone, I eat poorly and sometimes I sit down in my studio for too long. I’m a procrastinator by heart and am motivated by severe bouts of stress (join the club, right?). I’m impatient and want to make sculptures in an instantaneous whirlwind. I’m trying to slow down, learn how to construct things better and take fewer shortcuts. Also, when I’m in the throes of making something new, I tend to forget about everything I’ve made before. I need to zoom out and look at the bigger picture and remember what I’ve done rather than feel ashamed of what I haven’t made yet. I constantly feel like I’m starting from square one, but that’s just not true!

Admittedly I’m still amidst a bit of a theory hangover from undergrad, so I haven’t made it through anything particularly dense or enlightening or art related lately. I just cracked into Suburban Nation by Andrés Duany for an upcoming project and it’s really good so far! I’m currently drawn to home improvement and interior design books (essentially picture books, haha). Two that are in my immediate vicinity are Garden Accents: The Complete Guide to Special Features for Creative Landscaping and Asian Style: Creative Ideas for Enhancing Your Space. The authors make grand statements about what elements elevate a space to appear cultured and elegant, and it’s easy for me to pick apart their inherent cultural bias. I also keep returning to Mythologies by Roland Barthes—there’s an essay titled “Plastic” in there that’s really charming.

Is there anything you cannot live without in your studio? Why?

Water (I’m eternally dehydrated), my respirator and coveralls, 5 gallon buckets of silicone and a playlist of the same 30 songs I listen to on repeat. The perfect cocktail for a long night in studio.

My work/life balance is all over the place right now but I’m taking a break from my full-time job in May to do a residency at Vermont Studio Center! It’s been a hot minute since I’ve been able to fully dedicate myself to my work so I’m super stoked to dive in, meet new artists and maybe tackle a slew of studio demons along the way.

I also recently started co-running the Bermuda Project, an artist-run space in Ferguson, MO. The gallery is a modest platform for introducing artists from around the country to the St. Louis community and we have some exciting shows lined up for 2019. Check it out! thebermudaproject.org

For more of Rachel Youn: rachelyoun.com