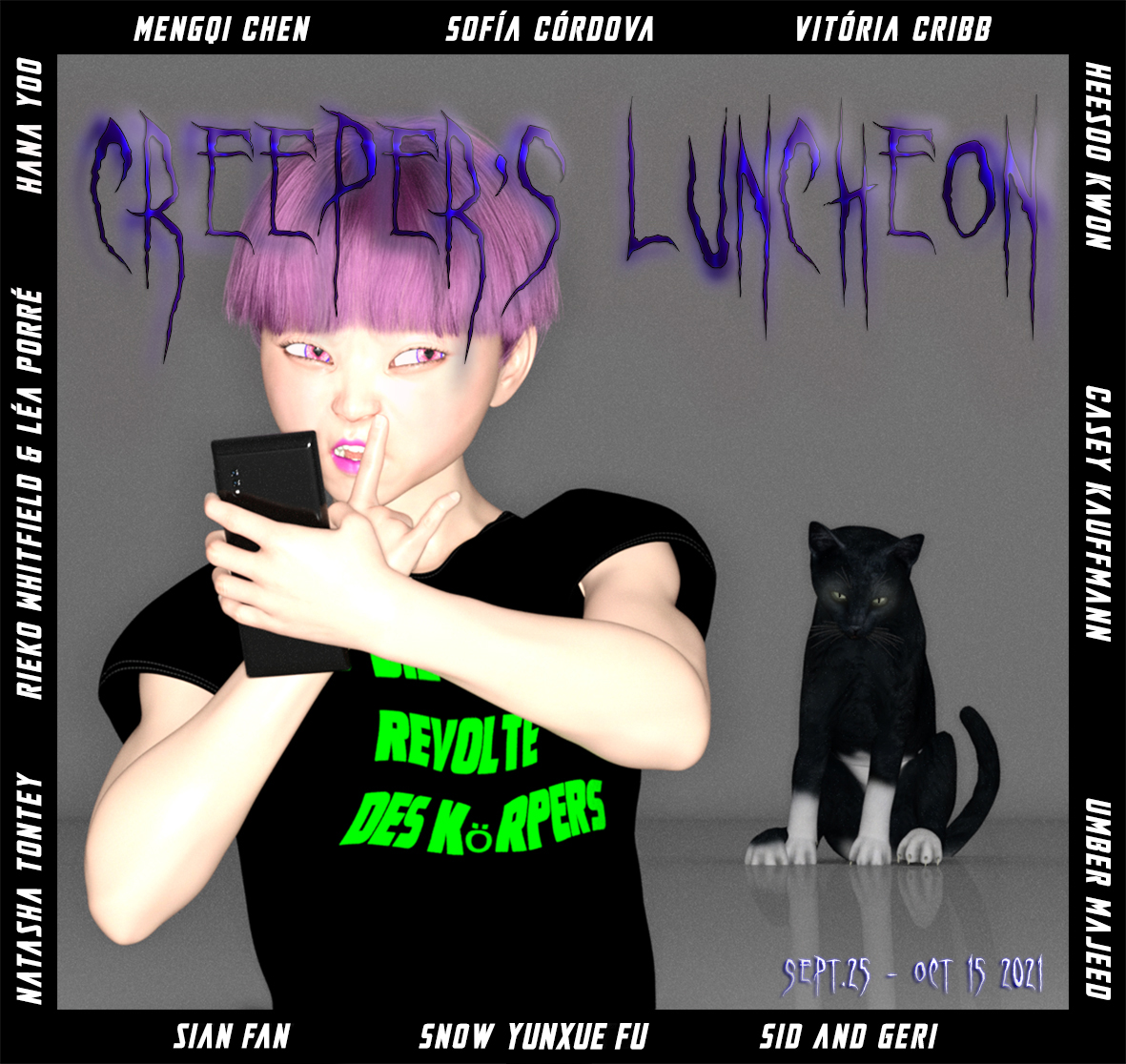 Cɾҽҽρҽɾ’ʂ Lυɳƈԋҽσɳ is a group show of all women featuring works that explore the intersectionalities of feminism, identity, glitch, and systems of unseen power.
The anthology of videos create a frenzy of dialogue, one that draws on a myriad of topics from reconstructions of antiquated patriarchal myths that transform as female-centered tales, to de- colonizing the realms of fabricated platforms, or to the socio-political nature of the digitally rendered femme body and her agency in online existence.
Cɾҽҽρҽɾ’ʂ Lυɳƈԋҽσɳ is the strange brunch you wish you never went to but also the one you wished you were at every weekend. Horror and humor are served up hot and bloody marys drowned in fear, revolution, and assimilation are bottomless. The videos build on each other to create an experience of absurd anxiety. Cockroaches swarm and devour depicting a non-human centric landscape in Natasha Tontey’s Pest to Power asking who are the gatekeepers of the illusions of future? Demon and divine become goddess in Mengqi’s HTTP 5.0 where faces fall like executed chopped heads birthed from the serpent-human hybrid. In the Name of Hypersurface of the Present Umber Majeed parses between the sonic similarities of the pronunciations of terminology in the English language in the context of the Pakistani nuclear endeavors that immediately haunt - “bloom” is only one letter away from “boom.” The artists build their sacred fantasies, only to unveil their desires for the world we actually live in. Consumption, consumption, oh glorious consumption is the goal for this exhibition. Yet why does Cɾҽҽρҽɾ’ʂ Lυɳƈԋҽσɳ seem less dystopian than the world we inhabit? Through all the raw and flesh offered on silver platters, by the end of the feast, one has to wonder if indigestion was always the final destination. (Caroline Yoo)

Cɾҽҽρҽɾ’ʂ Lυɳƈԋҽσɳ is the collective screening curated by Wednesday Kim (De:Formal) for theMOCK JuNGlE screen that will be on air from September 25th to October 15th 2021.
The exhibition will be available every day, every hour, 24/7, from the outside, directly from thestreet. Visitors don’t need reservation.

MOCK JUNGLE, a project by Metochè included in the istitutional program of ART CITY Bologna2021, promoted by the Municipality of Bologna, continues its broadcasts from the Chapel of SantaMaria dei Carcarati at Palazzo Re Enzo, Piazza del Nettuno 1.