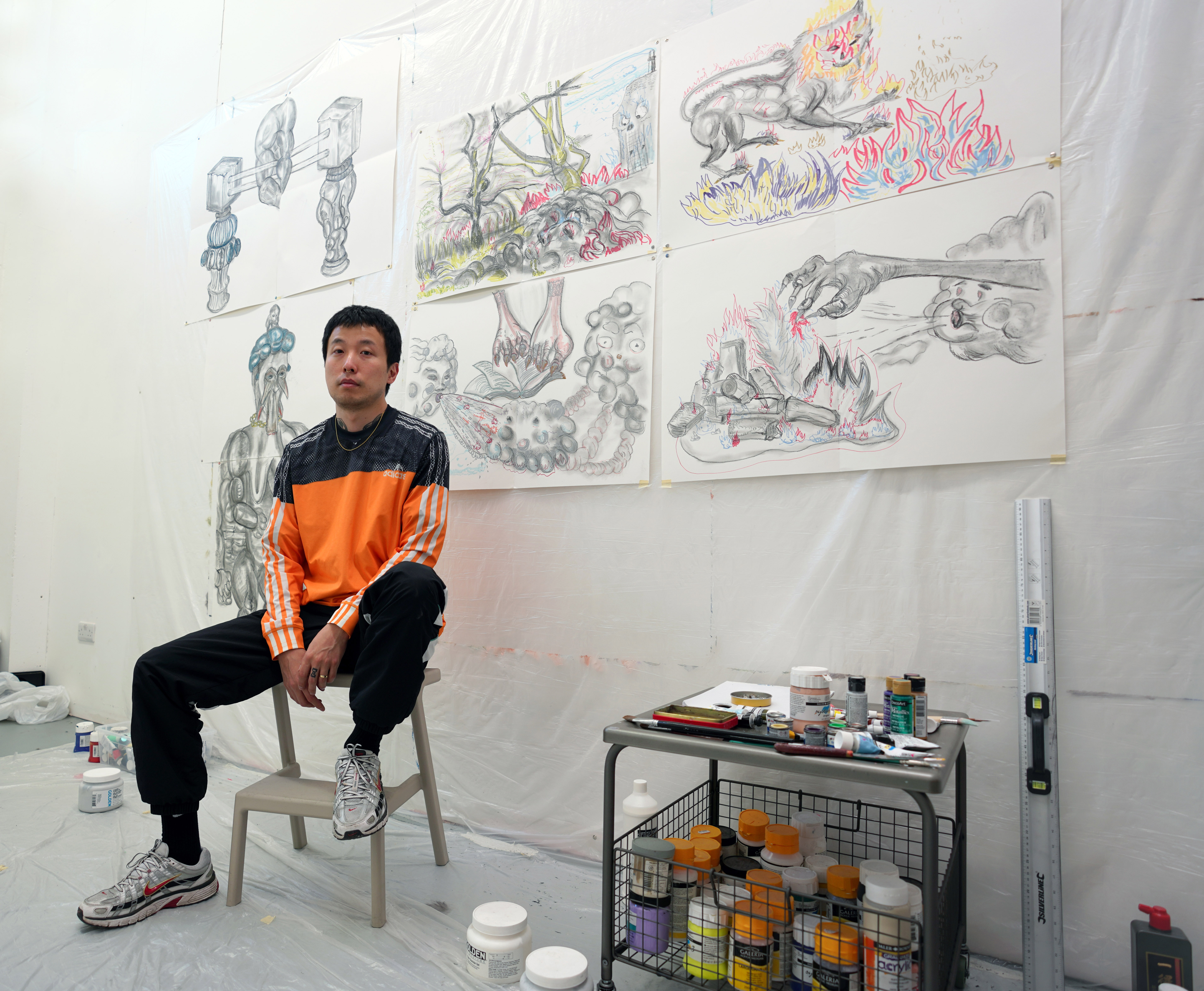 Tian Mu's practice spans paintings, sculptures, videos and installations, with advanced technological methods of production such as 3D rendering/scanning, biological and commodity forms. He probes the limits of human body and the material world to interrogate the unforeseen vulnerabilities brought on by technology. His work examines the embodiment of human projection and spiritual characteristics. Questioning how person to machine exchanges reflect the contemporary human condition. Perhaps humankind replaced by animals, and technological animism is taken on the mystical and the superstitious. and this cycles of creation, extinction, rebuild guides the future production.

Hello Mu, we hope you are well in this surreal time. We are grateful that we still get to share your work and ideas with our viewers through the internet. Can you start by telling us a bit about yourself and your background?

I like basketball, horror films, checking Instagram and selling things that I don’t need. I hate screaming, taking exams and getting a parking ticket. I have lived in London for quite a long time. I’m considering if I should move to the next place.

You will find I answer this question differently every time, because I never remember what I said last time. So please, let’s skip this one :)

Can you tell us more about your solo exhibition PARTY OF THE REDUNDANT?

Someone saw my works on Instagram and ask me if I want to put up a show in his gallery. And I did, so the show happened.

Like hybrids of creatures and machines that are often depicted in your work, your shows are usually hybrids of drawing, sculpture, video, and installation. How do you approach your work in different mediums? What does material choice mean to you? How do you go about utilizing found objects?‍

I started with painting and drawing as my medium, until one day a friend who is a sculptor suggested that I should try to bring my works into the third-dimension. I never thought about it before, so I did and found it fun to work with solid materials. I am always fascinated with the imperfection of human body as a kind of fetishism. I also adored classic marble sculptures from the Renaissance period. It is funny to say but one day I passed by a metal scrap yard and there were weird but almost human like gesturing machine parts sitting on a cut piece of marble. Somehow, I stopped and touched the marble, I felt the machine was alive, like a living creature with its phantom limb, the veins start to flow and run its circulation. That is the beauty of the marble as a creature but not material. There is something salvageable about forgotten and neglected objects, I always think I should use it to bring them back to life.

Recently in quarantine, I have been trying to bring painting and drawing back to my practice. The process of painting calms me down and helps me to discover more clues for future works. I think using different mediums is like learning martial arts, you start with one, and then the second and then the third... when you have learnt more than enough, your instinct helps you to find one that suits you the most. It also changes with different life stages.

What is your process like making a series of work? Can you walk us through some of it from getting the inspiration to completion?‍

I often get inspiration from the combination of organic stuff and nonorganic stuff. Like how fishing hooks catch the fish, the hook is the nonorganic part pretending to be organic to attract living creatures. I’m specifically interested in those nonorganic objects, it almost like I have a stronger emotion for them rather than the organic body. I buy these things and keep them in my flat to live together for a while. They are really like pets, or toys, you know what I mean. When you have just had a long day and  are sitting on your armchair, the conscious bit of the brain stops working, and it is the unconsciousness that takes me to play with these objects. This creates the scratch of my very first model for my works. To decide when it is finished is even harder. And can ruin your works completely. I don’t really know how I survived without destroying the existing works‍

What is the art scene like in London? ‍

How does it affect you?

How do you go about titling your work and shows?‍

I use words/sentences from the news and friends chatting.

Your work connects historical mythologies to a futuristic post-human world, a synthesis of the organic and the mechanic, especially during this uncertain time, it makes us wonder what's your view on the future of the humankind? Are you optimistic, pessimistic, or else? Do you somehow convey that in your work?‍

I’m neither optimistic nor pessimistic. I always believe that history is a wheel, so there is no such concept as past or future. When we look at the another point on the wheel, that is the future, even the things that have already happened are future, they just transform into different stories, but still the same old patterns. Myth, for example, or ancient stories contains some of the most classic patterns. And I think they have revealed the very essence of humankind. For the second question, I was not intentionally trying, but if you see this point in my future works, then it means I did.

Can you tell us more about your Drawing Mundane and Digital Mundane series? What is the relationship between the two series of work?

Oh, I don’t comment on my works. It is as complicated as to analyze my own unconsciousness.

How are you coping with social distancing? Are you working on anything these days?‍

I am following the rules like most people are during the quarantine time. My cousin sent me lots of different types of masks. So, I am finding it difficult to pick one to wear, but I’m actually more worried how to bring back myself to the social life. I have been working on two-dimensional works and digital works lately.

The previous one that I had in South London was like a flea market, which means things went missing easily. So the answer is no. I have now moved to Hackney Wick this year. It is good to have a very clean and tidy studio with messy paintings.

Would you consider collaborating with other artists? If so, what do you look for in artists you collaborate with?

I haven’t really thought about of collaborations to be honest. It not something you can consider in advance, the collaboration comes to you, doesn’t it?

I stumbled across someone called Rambalac who posted 4k videos about city walks on YouTube, as if the audience is the one who walks around different cities and backstreets. I found them absolutely comforting.

I have bad sense of humour, but I like making jokes. My wife complains about my jokes, it really does my head in sometimes.

Is there anything else you would like to share with us? Any fun facts our readers can learn about you?‍

My mom had this obsession with putting me to sleep on books when I was very little, so that the back of my head is flat. And I really wish this did not happen.

For More of Mu: www.theslash.club