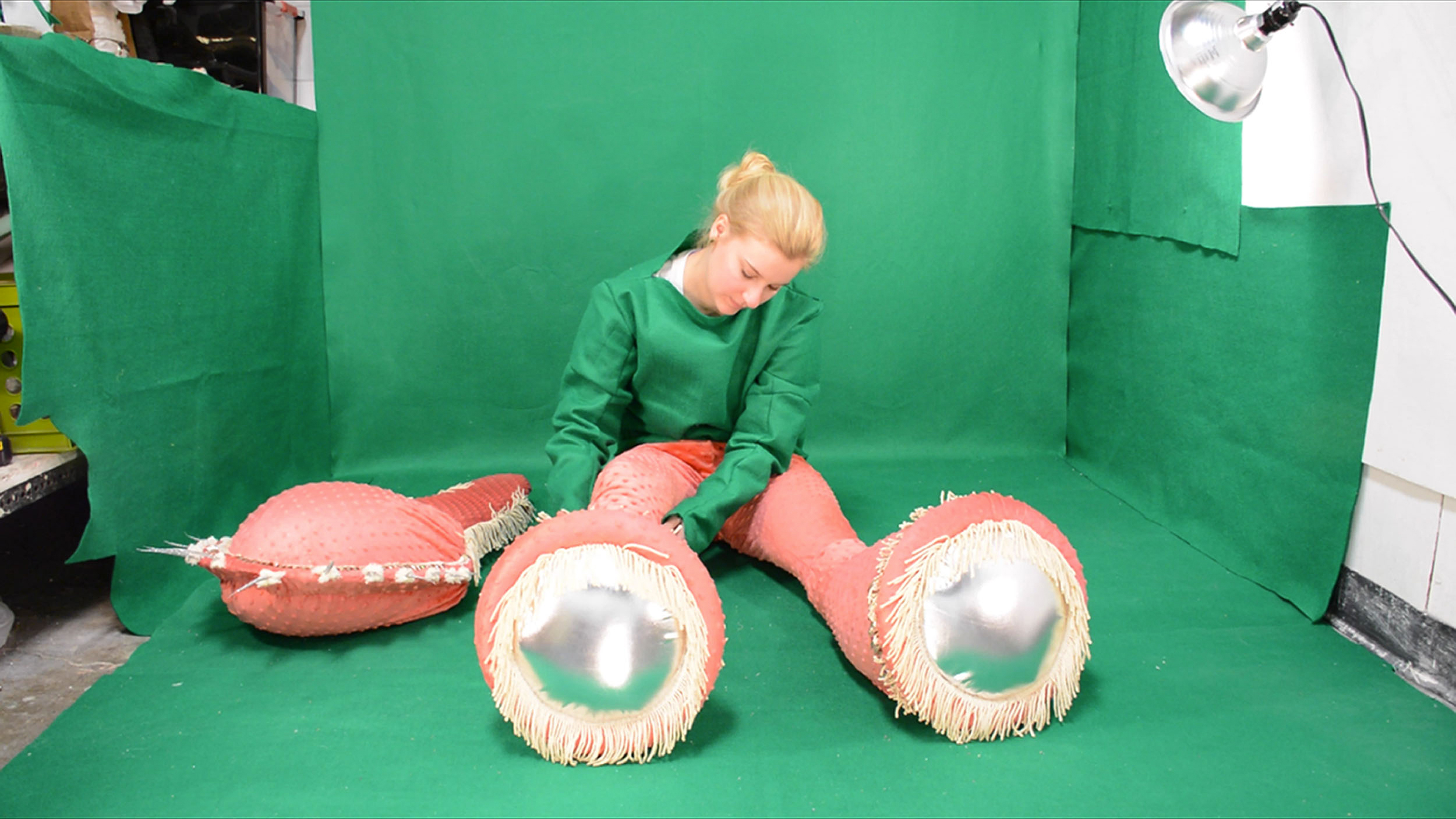 Sidney Mullis is a sculptor who makes work about puberty, the intimacy of forgetting, the performance of gender, and the resurrection of childhood selves. From her training as a dancer, she is sensitive to how bodies move through space, and the narrow bandwidth in which they can do so safely and without scrutiny. Now, her dance partners are her materials. It is through making that she tries to understand normative values and how systems of authority develop into ‘the way things are’— and, more importantly, to see what they could be. Mullis lives and works with her materials in State College, PA.

Hello Sidney, it's great to have you on De:Formal. Can you start with sharing a bit about your background and your practice with us?

Hi! I grew up in a military family. Despite moving every two to three years with my family to a new place, my constant as a child was dancing. I danced for 14 years performing countless characters. A schoolgirl, a hunter, a queen, a fairy, a cowgirl, a dead lover, an evil stepsister, and so on. I realized later on that I had spent many years being trained to move my body through a series of corrections to attain a certain ideal, and to never make the same mistake twice (don’t worry, many mistakes were made). Outside of dance class, I became sensitive to how the body is given certain roles and scripts to play out, not only in performance, but in our day-to-day choreographies. It still feels like I have roles I never auditioned for.

A lot of my work is related to the body, to childhood, to gender, to sexuality, to memory—and the performances that are laden in each. I invest in a wide array of materials that I am attracted to by how they feel—physically, emotionally, psychically. Instead of pushing my body, I now push my materials—testing their capacities to the point where they often slip away from their normative labels and categories, perhaps giving them a new script—even if just for a moment.

How did you first get into sculpture? Is there a defining moment or period where you fell in love with it?

It was my freshman year in college that I took my first sculpture class. I was so inspired by how it engages 360 degrees. I was taught that it is about space and how bodies move through that space. This, for me, is dance. Now as a sculptor, I get to influence how a body might move through a space that I devise. It's like building a choreography with the help of objects and how they are placed.

Your sculptures and installations consist of a wide range of materials, from found objects to food to fabric to wax, and often humorously named: such as t-shirt filled with love sweat, David's bucket, and balloons inflated with bated breath. How do you pick your materials? How are the materials intentional? How does naming the materials play a role?

I often include objects and materials based on their lived experience or energy. That content directly builds the concept for the work. That t-shirt is filled with love sweat. That bucket was David’s before he passed. And I filled those balloons with short bursts of bated breath. I relay their names in a way that shares what they are in earnest, but still elicits some mystery. What is love sweat? Who is David? What made her breath bated?

To be more specific, the balloons are in a piece called Sleepover. At the time, I was thinking about sleepovers and how they function differently according to your age. In childhood, mine were filled with play. In my teenage years, they were a place to share secrets. In adulthood: sex. I wanted to employ balloons in a way that retained their playful and celebratory connotation, but also appeared to grow erect or bulbous. The type of breath became a material to make that erectness occur. The balloons deflate over a three-month period. Every time the piece is shown, I remake the balloons and tenderly and carefully sew them back into the form.

Can you tell us more about the body of work when small words make big worlds?

I am currently building a ceremonial landscape that is the resurrection space for my seven-year-old self. I have been calling her Sid-the-Kid. This space is built of many parts, as if staged for performance, play or ritual. There is an altar made of gravestone dust, teddies, wax, sand, and rigatoni. There is a type of growth here that appears related to trees, yet starts from inside of rocks. Other objects lean and teeter as if learning to hold their weight. Some appear toy-like. Candles are imbedded throughout, purposefully unlit, marking the scene with inevitable demise, or at least the taunt of it.

This work comes out of being told I should feel grown up now. Yet, I feel an intense resistance to entering American society, as it is, quietly validating it as the best possible option for the next years of my life. Quiet, social integration? Right now? No, thank you.

Your work can be described as a fantastical mix of childlike playground and sexual wonderland. How did that come about? Can you tell us more about it?

It’s some sort of aesthetic that appeared when I started making work. I can't seem to shake it. I do approach art making very playfully, having a lot of fun moving about studio, say, like on a playground. I jump from process to process never seeking mastery, but enjoyment. Pleasure. I am also very intimate with the work. I spend long hours with it, responding to its needs, and touching it multiple times. That—paired with my conceptual motivations about childhood, memory, sexuality, desire, and the body—produces these spaces that are kinda cute, kinda sexy, and sometimes gross (not unlike a pubescent kid).

It's wonderful that we can feel you genuinely enjoy every part of the making process from looking at your work. What are your favorite parts of art making and being an artist? What keeps you going when in doubt?

Whoa, I wasn’t aware people could sense that. That's really cool.
One thing I became sure of early on—say 17 or 18—is that I really love making things. I love being in studio experiencing flow, being regularly surprised by what my materials can do, and the near-orgasmic elation of finding solutions to self-made problems. I don’t really need or favor the label artist though.
I did try to quit once. It didn’t work out. The memory of that time has been a pretty good repellant for when doubt sets in.

Besides sculpture and performance, writing is also a part of your practice. Can you give us some background on your book of poems, Foundation?

Foundation was made in 2014 and is part of the body of work Who is Puberty and How Does She Hit? I was on Youtube looking for a specific song. I found the song as an intro to a young girl’s homemade makeup tutorial. No ring lights, no sponsorships. It was just a girl sitting too close to the camera showing an unknown, online audience a makeup look. This struck me so hard because I was that girl. I was that girl making those tutorials, but for the silence of my bedroom.

As I began to watch more and more, patterns emerged. There was this understanding that makeup was not supposed to be for them. That this was just play. The titles of their videos reaffirmed this with titles such as, “fairy princess makeup tutorial.” Yet, despite it being for play, there was this knowing that the makeup shouldn’t be obvious on the face. It had to be “natural.” “You just want this to look natural.” Lastly, I watched girls that were a little bit older building looks specifically for the grade they were in. They still didn't want too much makeup because they were just kids, yet now it was only partly pretend.

Through the videos, you could see how they were developing the conception of their age and how to perform it (against a material that opposes it). You could see how they were developing ideas of natural. To make the book, I transcribed a bunch of videos including every “uhm” and “uh” to later reformat their words into poems. There are five poems in the book: Foundation, Eye Shadow, Blush, Mascara, and Lip Gloss. Each poem focuses on the words used for a particular makeup product emphasizing repeated phrases and interjections of their age—my favorite being “I lost a tooth” after the use of just a lip balm.

What is your studio like? Do you have studio rituals that get you in the zone? If so, what are they?

My studio is in the basement of my apartment. It has low ceilings and cinderblock walls. Creepy—just the way I like it. Music is my go-to to get pumped for studio. It sets the rhythm and I get movin’.

Right now, I am still developing when small words made big worlds. I am showing this work for the first time at Wick Gallery in NYC opening February 15 from 7-10pm. Come! I have a two-person show with Bonnie Jones at Grizzly Grizzly in Philadelphia opening in June. I am starting an 8-month residency in May at Bunker Projects in Pittsburgh. This will also conclude in a solo show in November. A few groups shows and a book project, too.‍

Do you have any bad habits? How do they affect your daily life?‍

I think a bad habit of mine is letting my to-do list get long and hairy before I can earnestly start it. I guess there is some pressure in that, which helps keep me on task and productive in daily life. It also helps me relax and rest in those down times when the list is just too short to start. ;)

Is there anything else you would like to share with us? Any fun facts our readers can learn about you?

To prepare for this interview, I looked at some old ones. And, in a previous interview, I was asked who I would like to meet. My response was Chelsea Handler. I have no recollection of this or the desire that prompted the answer.