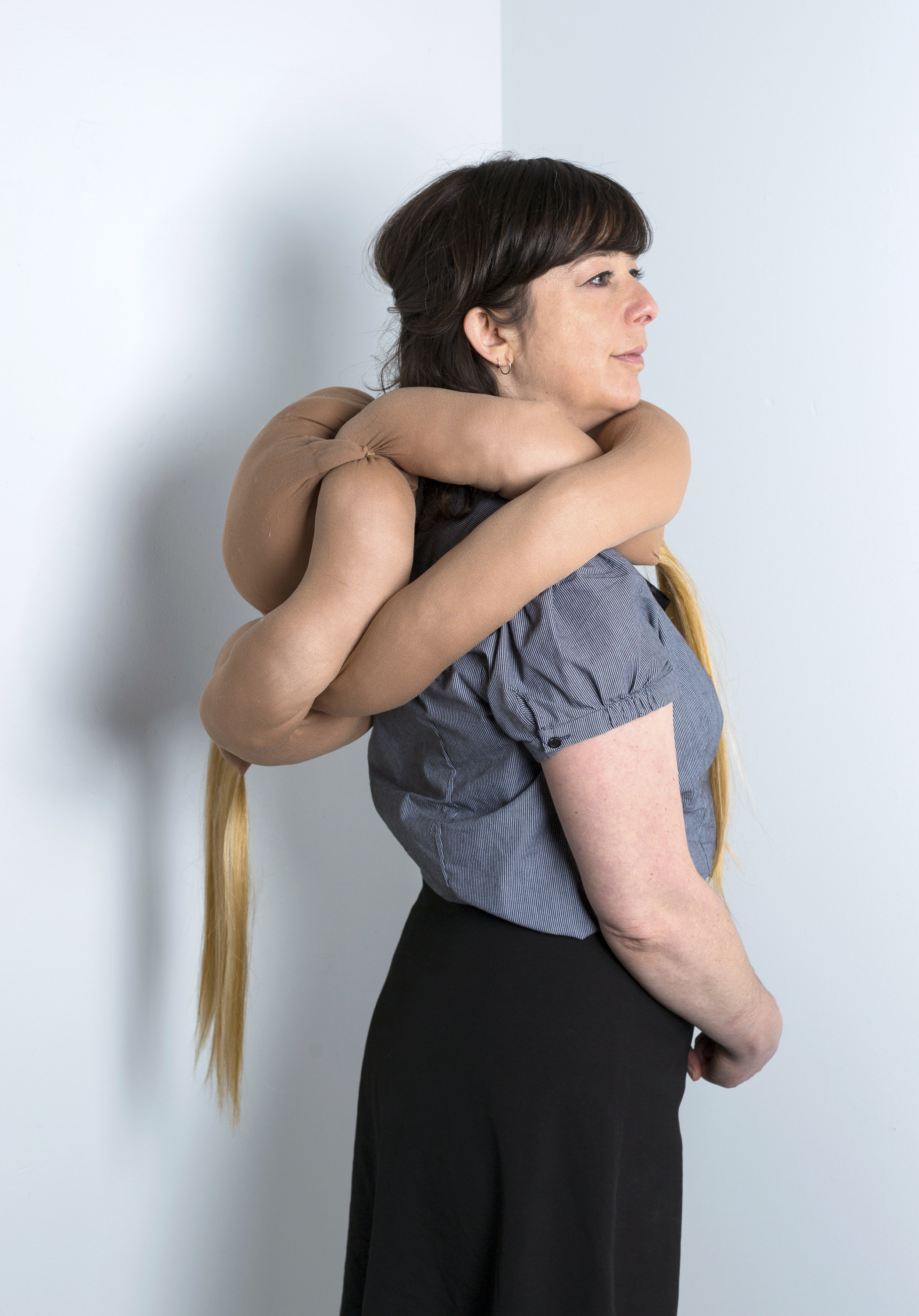 Santina Amato is an interdisciplinary artist born in Australia to Italian immigrants. She has lived and worked in the USA since 2010. Her practice incorporates video, sculpture, installation, painting and photography and is deeply rooted in psychoanalytic thinking and feminist theory, attempting to translate the complexities of her own female sexuality, desire and erotica within a patriarchal system.

Hello Santina, could you tell us a little bit about your background and how it influences your art practice?

I was born and raised in Australia by Italian immigrants. My mum, a very traditional woman, brought her Italian cultural ideals with her when she migrated. Her role within the family was to attend to our needs. She made all the food our bodies consumed which was as a 24 hour practice. As a family, we were all involved in the seasonal traditions: making pasta sauce in the summer when tomatoes were ripe and salami and prosciutto in the winter when the air was cold enough to cure the meat (she still does this at the age of 80!). Food was very much a main focus, both in preparation and consumption. My father worked two minimum wage jobs but had a rule to be home at dinnertime, even if briefly. When he was free, he would hibernate in his shed, tinkering away with wood and metal, repairing holes in the roof or some other household mending. Both my parents were makers of sorts and I was always fascinated by their processes and the results.

When I was five years old, I announced to the family that I wanted to be an artist. This didn’t go down well. I was raised to become the perfect housewife: trained by my mother to cook, sew, knit, crochet, clean and attend to the men in the house. The expectation of me was to marry some lovely boy, produce humans and live out my life as wife, mother, grandmother and so on. I rejected this idea; I wanted something greater. As a first generation Australian in the family, the door to my house was the border between the two worlds I lived in: a traditional Italian world, where gender roles and expectations were clearly in place, and the contemporary western world of an English speaking Australia where I could be anything my heart desired! I wanted the life that I imagined for my father when he was away from the house; something so much more interesting than that of my mother’s. He appeared to have a freedom in life that my mother didn’t and that is what I wanted for myself.

We’re fascinated by your performative sculpture and installation. Could you please tell us about your works and your thoughts behind them?

Dough was no foreign matter to me as a child. I'd watch my mum knead the soft, white material, folding it over and onto itself, pushing her whole body towards it, transforming it before my eyes over what seemed an eternity. She would then put it into a large bowl, cover it with a tea towel saying "it's time for the dough to sleep" and we would all head into the bedroom I shared with my sister. She'd place the bowl onto my bed and we'd cover it with heaps of blankets, closing the door behind us as we left the dough to 'sleep'. The process of dough ‘coming to life’ was always a thrill.

Untitled (Dough Project Self-Portrait) was the first dough work I created. In conceiving of dough as a form, I thought a lot about density and quantity. I imagined my own weight to be a ridiculous but poignant amount of dough. It was an intense thing to make dough equal to my own weight and really helped me develop not only a physical relationship with the material but an emotional one. The experience of using my body to mix, fold, push and basically give birth to a substance that was my body weight was powerful. This set the path for my continued investigations with dough.

My interest in using bread dough within my practice is its life cycle; once activated by warm water and sugar, the yeast cells split and divide, similarly to when an egg is fertilized by sperm. There is a peak moment when dough is voluptuous, full, and ripe, just before it begins to ‘die’. The ephemeral qualities allow for representations of birth, growth, time, sexuality, bodily limits, aging, death, & decay. The ongoing series titled Portraits of Women With Their Weight in Dough captures women lying with their weight in dough. A woman once wrote to me about the series, "… I see women sitting with their bodies and selves, and all the power and vulnerability that can expose, or bring to the surface. Loneliness. Love. Love of self. Self-empowerment. Self-loathing. The shades of grey that those states fluctuate between."

My dough works have recently shifted to what I am titling ‘performative sculptures’. By using inanimate objects and interfering with the architecture of the space, these performative sculptures allow the dough to claim its environment as it rises out of & around objects that it eventually consumes. These works, aimed to ‘perform’ live within public spaces, give agency to the living organism that is dough and re-conceptualizes preconditioned roles & relationships by considering the body in the space of architecture.

Performative Sculpture I is an installation where the aim was for the dough to rise out of a pluming pipe to fall onto a board, in the hope that it would flip over a bucket filled with wheat paste. The intended composition failed but it succeeded in handing over agency, allowing the dough to perform, or not. I am interested in attempting to remove gender, to be able to position my work in a broader bodily context. I want this work to consider any ‘body’ as Other, where the body itself as a physical being, regardless of colour, race, gender, or age, is Other in space. I was looking at Louise Bourgeois’ Fillette and Alberto Giacometti’s Suspended Ball. Both these works reference both male and female genitalia, swaying between the two literally or metaphorically. Performative Sculpture II vacillates between penis, vagina and arse hole, and during the performative act, the dough’s journey out of the hole references all types of matter that exits from the orifices of our bodies - ALL our bodies.

In your works and statement we see some influences from Bulgarian-French Philosopher, Julia Kristeva, has her writing made an impact on your practice? Also, could you talk about your source of inspiration?

Kristeva is definitely on my list of writings that I refer back to time and again, along with Rosland Krauss’ Formless, Georges Bataille’s Erotism: Death and Sensuality and Simone De Beauviour’s Second Sex. These seminal works speak to the experience of the body, some particular to the female body. Sex and my body have always been a difficult thing for me. My mother projected the Roman Catholic perspective that the female body was to act as whore or virgin. The way a woman dressed and acted positioned her in one of those categories yet men’s actions and the way they presented themselves never seemed to have such a strong reaction from my mother, which infuriated me as a child. I was always in a state of anger at the gender inequality surrounding me. My mother’s projection of what my body could become as an adult female body in the world, has resulted in all sorts of internal psychological conflicts about my own body being a potential source of pleasure and ownership while simultaneously a potential source of denigration and something that I didn’t own. My work attempts to translate my own experience of erotica whilst inhabiting a body that is seen as society’s abject body.

What is your studio like? Do you have any rituals or routines that helps you start your day in the studio?

I have just completed the heavenly period that is graduate school. I had so much space and time to create magic. At the moment, my bedroom has transformed into my studio as I am working a minimum wage job and can’t afford studio space. My work reacts to the given architectures, and so right now, with such limited space (I have a 4ft x 2ft table beside my bed), I am creating small mixed media works on paper that are 12” X 9” or smaller.

I am completely obsessed with Jill Soloways TV adaptation of Chris Kraus’ I Love Dick and so have developed a ritual of playing the series on my laptop late at night, painting until the wee hours of the morning. There is a quote from the TV series I refer to: “I was born into a world that presumes there is something grotesque, unspeakable about female desire. And now all I want is to be undignified, to trash myself. I want to be a female monster.” My works on paper have become monstrous. It is an interesting transformation that has developed in my current bedroom-studio, tapping into my psychological state. My body is entering the pre-menopausal stage of life and my paintings are definitely referencing this without any conscious attempts on my behalf. Last week, these works on paper became very fleshy and bloody and two days later my menstruation cycle began. There is something magical about working at night with a desk lamp as the only source of light and the distant sounds of a sleeping city.

Are you working on any new projects these days? What's next after SAIC?

“What’s next?” This question always comes up at an opening of an exhibition that you have worked on and sweated over and is one that infuriates me! I always say “Please, let me bask in the glory that is the result of really hard work that is in front of us all!” But in all fairness of simply being inquisitive and genuinely interested, I am to be Artist-In-Residence at ACRE in Wisconsin in August and looking forward to turning my hand towards ceramics. I’m planning on working with varying stages of ceramics – from unfired clay to glazed works – creating ephemeral sculptures that only last a few weeks to sculptures that are glazed with unconventional materials. The work I create at ACRE will be exhibited at this years 2017 Governors Island Art Fair, which I am excited to have another opportunity to respond to one of the dilapidated rooms. After ACRE & GIAF? Who knows? I have thrown my art into the wind and waiting for it to land somewhere in the U.S, to take me on my next adventure!

Do you have any bad habits? If so, do they influence your work?

The term ‘bad’ is subjective. And so with that said, I wont share what my ‘bad’ habits are because they are extremely dull and uninteresting or illegal.

As my art mother Louise Bourgeois once said, "Art is a Guaranty of Sanity," Here’s to staying sane!

For more of Amato: santinaamato.com