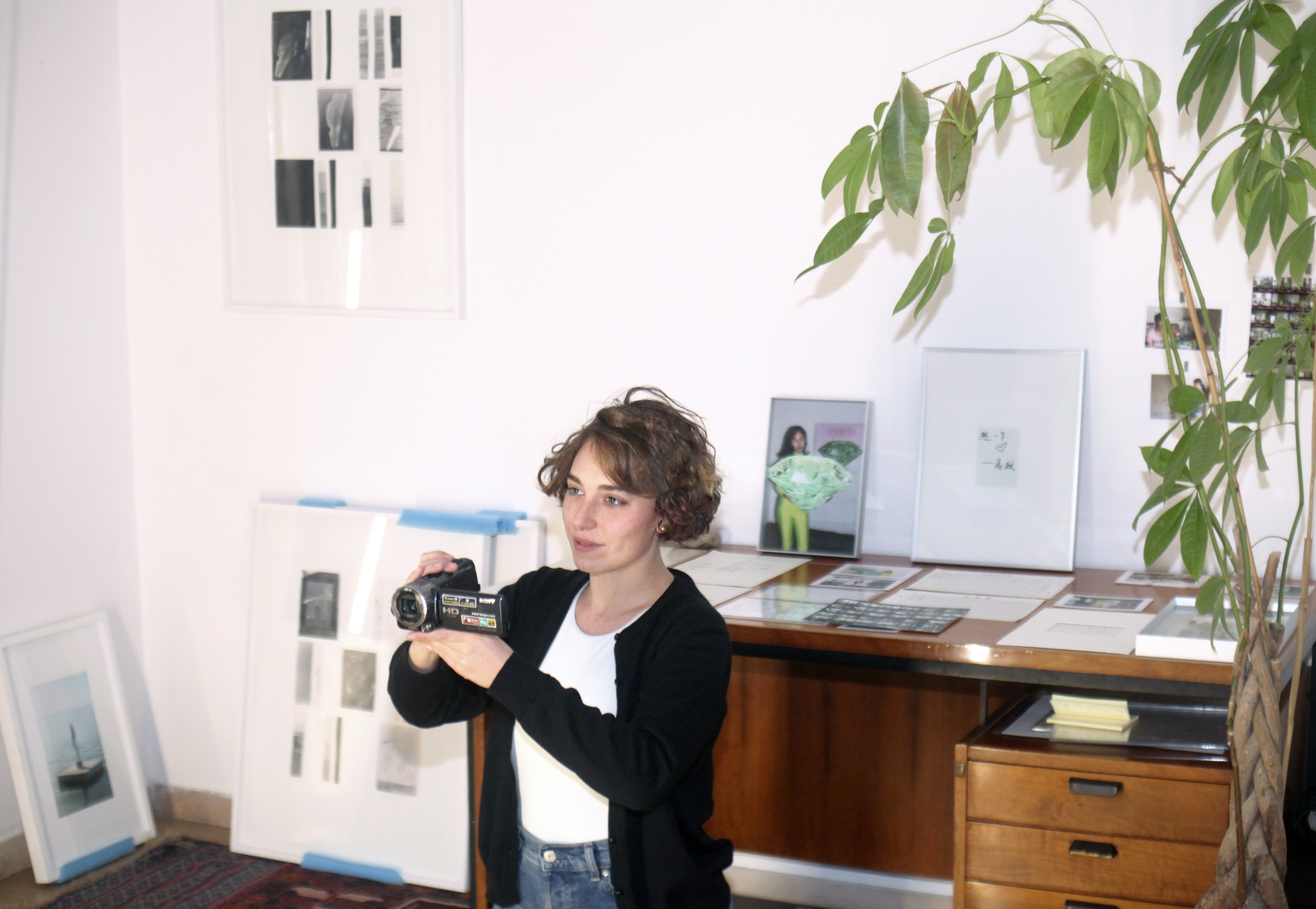 Rachele Maistrello’s practice has mainly been focused around different aspect of the deconstruction of clichés, through an attitude based on a private relationships method in suburban environments, in which the photographic medium is used as a social instrument of estrangement. In her research, the sumptuousness of kitsch, the contradiction of the tautological and the iconology of the peripheral are the upshot of an ongoing attempt to come closer to people and their own private heroism. She mainly couple photography with performance, but her love of Internet, the great outdoors and deviation often lead her towards unlikely visual hybrids. From her rich list of visual notes, emerge images that slip between the order of the true, of the uncertain and of the false. To understand their nature, we are obliged to study, with a semiotic eye, the cuts of the framing, the origin of the light source and the possible presence of reflexes.

Hello Rachele, we're so glad to have you on De:Formal. First of all, can you tell us a bit about yourself and your background?

I was born on August 25th, a day when the summer is still hot but already nostalgic, because autumn is approaching. I grew up in a small town in the north of Italy where you can always see mountains on the horizon but snow comes very rarely. I have always read a lot of books, I approached photography thanks to a diverse educational trajectory (IUAV, Venice, ENSBA, Paris, ZHDK, Zurich) which I have always experienced in a rather conflictual way. To tell the truth, my unconscious model has always been Pippi Langstrumpf, the first example of involuntary anarchy that I experienced. Pippi always does what she wants to do, she defeats thieves by playing, she has a polka-dot horse that she designed, her world is in line with her imagination and she shares it effortlessly. Her model works because it is regulated not by dogma but by empathy.

How did you first get into photography? Is there a defining moment when you knew photography would become your main pursuit?

It was when I realized that thanks to the camera I could establish a dialogue with people, sometimes unknown people, in a much more intense way than I was used to. I could get close to their soul without necessarily knowing them. Then I realized that I could play with time, circumstances, history, revolutionizing them while staging them.

What is your process like? How do you come up with themes of each projects?

I come into contact with a place or situation that reveals to me something that has been present for a long time: a forgotten dream, a deep archetype, a symbolic story, and then I basically enter these places and create a certain controlled chaos, which acquires an accomplished meaning in the end, when I feel that there is a logic and a deep meaning to what I have in hand.

Some of your work, such as Stella Maris and Pennabilli, require your presence in a single location for a period of time for research, observation, and human encounters. How did that come about? Can you share some of your favorite experiences with us?

G.'s wife needed constant care, he didn't. She had to move into a nursing home to receive the necessary care, G. could have visited her from time to time, but he decided to move there and leave his home, just to be near her. They turned their room into a miniature house, but now she's gone and G. is left alone in room 05 on the first floor, and every day he goes to the beach to get a shell and think about her. He didn't regret what he did, and he says he's happy because he couldn't do otherwise. G. taught me to get to the bottom of my own choices without fear.

I decided to tell about G. through his drawings, which have become magical transparent tools to use for hours in the darkroom, impressing the paper in long time sessions, which revealed the symbolic power of homage and dedication in my practice.

In your statement, you mentioned your images exist in between the improbable and the plausible. A mix of nostalgia for something that has never existed and future that might have been able to happen. Can you elaborate on your interests of the relationship between them? What are your thoughts on memories and expectations in relation to photography

Photography attests, so it can lie better than other languages, but photography also makes the present past, freezing it, and by doing so it preserves it for the future, somehow taking some life away. It is a nostalgic instrument by nature.

But what exactly happens when you decide to bear witness to something that does not yet exist, can you be nostalgic for the future?

You mentioned photographic medium is used as a social instrument of estrangement, and your attempt is to come closer to the people and their own private heroism. In the age of internet and piecemeal photo sharing, what are your thoughts on photography simultaneously being a medium of estrangement and personal connections?

I believe that today a form of self-actualization is happening, in which photography becomes the construction of a desired identity and in the time it has undergone. The photographic estrangement that happens when we don't recognize ourselves and rediscover ourselves at the same time can only be found in our "self-censorship" or in all those images that we hide, deleting tags etc... that are no longer seen and maybe rediscovered after years.

As far as the variation of personal connections dependent on social media is concerned, one could write a treatise on anthropology, it is really a complex subject, which includes sociology, psychology, anthropology and political science.

We are curious about the origin of Green Diamond, how did you first come across the subject? What makes you decide to investigate the bio-tech company and eventually have a whole series of work about it?

Green Diamond may have really existed, maybe it's just the product of conjecture, and Li Jiang Ping may have really given me all these documents during endless days of reconstructions, selections, scans, or maybe he could also be a character in my fantasy.

The company charts, the registration documents to the administrative office company, the invoices for Gao Yue's costumes are stamped and dated in the 1990s, so they must be true, but are we really sure about this?

Green Diamond is not a film, it's not entirely a historical archive, nor is it a story. It's a hybrid that freed me from all the preconstituted forms that I felt I was suffering after so many years of working as an artist in a system that was holding me back. It escapes from definitions and is reflected in a present that I live every day, made of true or presumed information, pin-pong of data read in a hurry, true theories that seem science fiction and conspiracy theories that seem absolutely real.

Can you tell us more about “private heroism” and how did it become a term of focus in your work?

Private heroism is a condition that helps to observe history from another perspective: the hero in history and mythology has always been a public figure, above the everyday sphere, but I am interested in how this concept can exist within a system that tends to be incongruous. Heroism in the private sphere is often invisible, unreported, not noteworthy, but it exists and its strength is even stronger because it is born from failed assumptions, which have no historical references in history.

What would happen if in the history books it was mainly the great deeds of everyday life that were told? How would we reread the historical facts?

Natalia Ginzburg, a wonderful author, of whom too few books have yet been translated into English, the latest discoveries that are inspiring me are the books by Chimamanda Ngozi Adichie and the essays by François Jullien.

I'm trying to understand if the cinematic form could be a language closer to my current sensibility, for now I'm trying to write a draft screenplay from Green Diamond, my latest project.

I sleep too much, I have no sense of time and stare at people I don't know.

Is there anything else you world like to share with us? Any fun facts our readers can learn about you?

Sometimes while I'm writing I imagine I have glasses, and depending on what I write the frame changes, now it's rectangular, a bit like a math teacher.