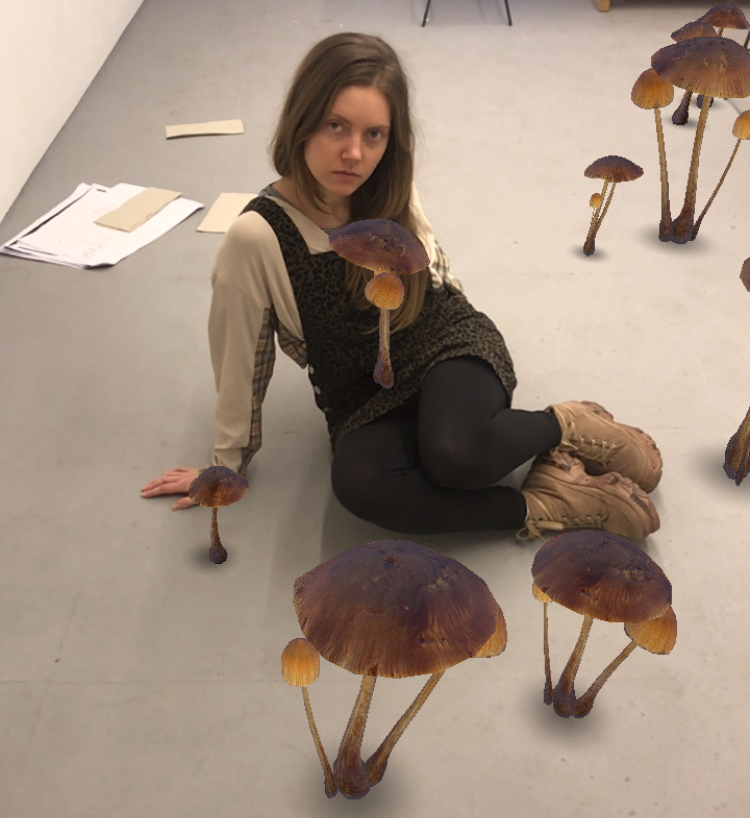 Hello Olga, can you start by telling us about yourself and your background?

Hello! I came from the southern Ukrainian city Odessa, I am currently based in Prague, Czech Republic. Also, I've been living in several places such as Athens, Greece, Stockholm, Sweden, and Taipei, Taiwan. As an artist, I feel the influence of both, eastern and western Europe. Currently, I am graduating with a Master's degree at the Academy of Arts, Architecture, and Design in Prague.

How did you get into video, sound, and performance?

I started making art since I was a child. Starting with painting and drawing at a local art school in Odessa, taught in the style of old-school social realism, which was the only one we were allowed to use. Teachers were very mean, when I tried to do something else they would even destroy my paintings. Naturally, after such a trauma, I just tried to do videos for my Art University application. I felt such freedom in what I am able to do and how it is supposed to look like, that I have stayed in this digital media and sculpture for years. But since 2019 I've come back to painting and drawing and now I am combining all of them.

Can you tell us more about your interests in urban myths and contemporary fairy tales created from social media, Vlogs, and memes?

Social media and the internet transform our minds hugely. I grew up with the internet as a native to it, but I also remember the world before social media, it's my natural language to speak. I would call urban myths just memes :) It's been several attempts to study memes in academic research papers around the world, but it's still a fresh medium to fully understand it. As an artist, I try to balance between memes and myth or fairytale, which are very old and understandable mediums.

Rituals and parties are some recurring themes across your work, why is that?

I think I've just been very tired of a conceptual approach to the art of the end of the 20th century. I want to use art as some sort of magic. Contemporary art still stays in the space of non-describable and even an act of doing art is at some point senseless. That's the one parallel, the second reason is also some need for more spirituality and connection in today's world.

Can you tell us more about Basic Instinct Special Feat, a collaborative performance and installation, created by you and Adrian Altman?

We started with Basic Instinct Special Feat and other projects in this series back in 2018 as a collaboration based on friendship and sharing of free time, and interests. I would say it was a very intuitive project, and as it was a collaboration we started to include a lot of different elements into the project. So it ended up being a video game set up inside of the exhibition space. We did two games during the show, but it also worked alone, without us like a choose your character screen inside of the gallery environment. I like the result, it has very different ways and layers of reading. Other projects of this series were based on the characters we created, but we changed the rules of games or even the conception of what is the game.

Your work often involves a team of people, including performers, sound artists, and writers. Do you have a favorite memory of working with a team? Have you run into any difficulties? How did you resolve it?

I really like to work on collaborative projects and to invite people to participate them. Also, I play a lot with the meaning of collaboration and the roles within. For example, in Don't Panic! I invited designers to participate in the show, so I created sculptures and curated a show inside of them. Also, I included an object inside of the video, which runs simultaneously. At this point, I was interested in the relations between an art object, design object, and authorship. During filming I usually create a very free space for all the team and performers. Some of the filming needed to be a real costume party. When I come with this more fun than work approach, other members kinda feel it the same way, so far there were no difficulties :)

How has your work evolved over the last few years?

As I've mentioned I evolved from digital media, objects, and installation to more into the objects, or painting, even drawing. Also, another reason is an epidemic of covid 19, and impossibility to work on the big collaborative projects. Also, my focus evolves more to reflect my origin, and personal themes than just reflexing today's world.

For the first edition of EnjoyeTV, you re-presented video works from other artists within your own installation. How did this project come about? What do you look for in the artists you work with?

I was interested in the relations of the roles of author, curator, and artist. I wanted to ask this question in a playful form, so that's how EnjoyeTV came out. TV is a format where you just see a curated feed, and you can't control the play time, or skip to the next, so this form was ideal for sculptures. Also it has a link to Nam June Paik's first TV sculptures. I have chosen artists based on my interests in contemporary arts, but also based on relationships since I knew personally most of them. So it also has some community dimension.

Can you share with us your experience studying at National Taiwan University?

Are there new ideas or themes you are interested in exploring next?

Yes, I am currently working on Remembering the Old World theme, where I explore my experience growing up in Ukraine, and living in the EU. I am working with memories of a souvenir shop my parents have there, and it has a significant impact on the overall visuality of my artist practice.

As all of us, I follow a lot of stuff online :) What comes to my mind now and somehow relates to my themes: I would recommend the anime Perfect Blue and other films by Satoshi Kon, or the Swedish film Midsommar. Listen to Yves Tumor or SHYGIRL. Or just watch some TikToks, I am fascinated by the layers of video and sound memes developing there.

Do you have any bad habits? How do they affect you?

It's for sure procrastination. I spend a lot of time on social media, and I am trying to work on it. Also it affects our psychics, I feel the negative impact on me. But it's no way back from this kind of connection, but we have to demand better security and less 'junkie' algorithms from tech-giants. Healthy environment.