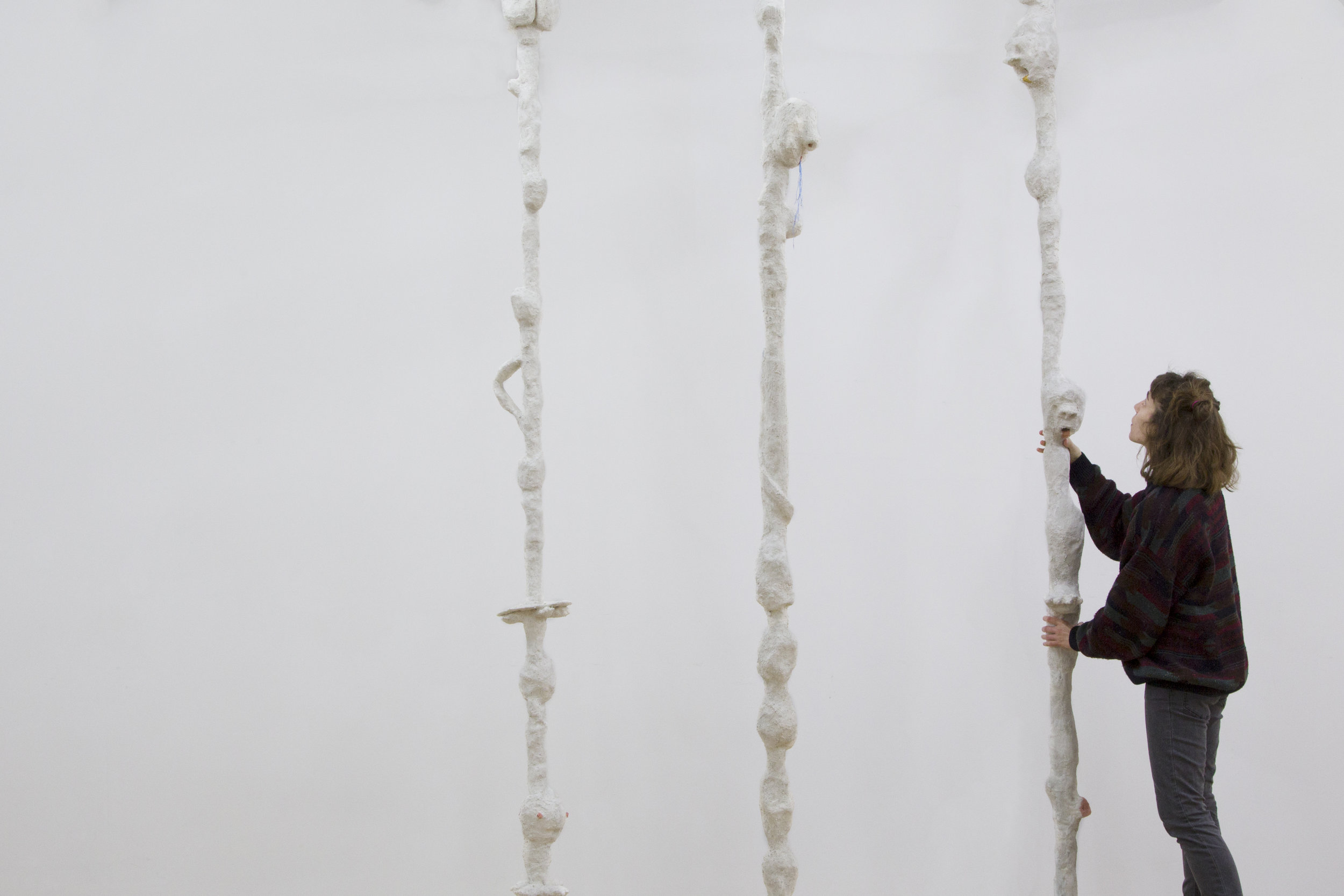 Miriam Naeh works and lives between Tel Aviv and ‎London. She graduated from Musrara School of Art, Jerusalem (2014) and is doing her MFA in ‎Fine Art at Goldsmiths, University of London (2016 - 2018). In her work she collects ‎and assembles fragmental elements and situations from different territories, and makes a ‎mixed arena of visual absurdness. She‎ uses photography, video installation, ready-made, ‎sculptures and recorded ‎performance in order to appropriate and reshuffle the visual evidence ‎that has been ‎drawn from reality, thus creating an unreliable report which can shift its focus ‎‎towards possible – possibly fictive – untold stories.

Could you tell us a bit about yourself and your practice?

I grew up in a small neighborhood of Jerusalem which back then functioned more like a suburb. When my Mother was twenty-four, she and her siblings lost both their parents, and from that time on we lived next to one another in the style of a commune. Surrounded by many cousins around my age and my own siblings, our parents relaxed a bit... and we lived a life where the control, rules and hierarchy were led by us; less similar to 'The Sound of Music', but somewhat more like ' Lord of the Flies'.

Our home was bordered by fields and nature, and as children we would always play outside using every scrap, object, animal and human that we could find to create our games and performative plays. Disturbingly, these plays were often quite accurate reflections of our own reality, involving historical narratives that were engrained deep within our family’s past.

This method of blurring the boundaries between reality, fiction and fantasy, of emphasizing and staging small everyday situations together with storytelling, history and cultural symbols, and ‎of using waste and found objects for materials has remained with me ever since.‎ Plus - of course - the main method of working with other people, who are usually not professional actors or performers, but rather people who are close to me.

What are the concepts and ideas behind your work?

Storytelling, myths, theatre, absurdity: My works often derive from ‎experiences; some are personal, while others are gathered or stolen or perhaps overheard in passing. I am mostly drawn those which are absurd, to those experiences which encapsulate multiple occurrences or actions but which fail to make any obvious ‎sense (I am not a big fan of sense; I have just read a book by Daniel Neofetou, where he describes the experience of watching Lynch's Eraserhead with a group of people. As the film progresses, one spectator becomes frustrated that the film does not make any sense. ‎Daniel responds that the film doesn't need to make sense, and describes how a few seconds later the ‎frustrated viewer remarked: "It makes a lot more sense now that I know it doesn't need to make ‎sense”).

For example, two days ago I saw a tortoise passing through the street with a little girl running after it clutching a dead fish in her hands, whilst an old man was shouting verses from the Bible. Moments like these begin to spark visual processes in my head, and begin to generate stories that may become new works. I enjoy mess: the chaos of creating and combining unrelated elements, the fictionalization of not only well-known, but also anonymous symbols/myths/artifacts, the continual play between the relative value of things, and the creation of uncertainty. In my work, I try to create a capsule - a moment that contains humour, pleasure, tragedy and sadness all at the same time, a moment in which a viewer's laughter might be followed by a feeling of deep unease.

Your work combines video, performance, and sculpture, how would you describe the relationships among them?

I like to look at my works through the prism of transformation –as a practice that changes and shifts between mediums, forms, materials, meanings and characters. Usually the performances are not live but recorded, and I mix them in with the video's sequences. I started to do that when I felt that my works were most effective when the line is blurred between that which is performed, directed or staged and the editing and interruption of the actual moments. My sculpture functions in two ways: there are the props and outfits I am making for the videos, and there are the sculptures which are part of the installation. After filming, the props usually become practical objects (for some reason I have hamsters, and my small props have come to function as their cage's facilities). Once installed, the sculptures become an extension of the narrative, albeit often indirectly, and serve to return the narrative and the work to the physical world of the present.

Can you tell us a bit about your piece "Flora and Fauna (Oh, and One Transitional Object)"?

The idea for the video began as a coincidence. Working in a very small studio space with limited storage space, I found myself transferring most of my artworks to my small apartment in Deptford, London. One day, I suddenly realized my props and sculptures were surrounding me. My props were beginning to hunt me. Not only that, but my partner threatened to throw out some of my works because he kept bumping into them. I was beginning to have visions of a mad clichéd couple, cocooned within their shitty apartment, growing their own crops. As a consequence, I transformed our apartment into a small theatre set, where the outer world was transformed into domesticated forms and representations inside the house, and my partner and I became characters who every now and then became part of the objects as well.

You employ a wide range of materials in your sculptural works. Can you describe your process of selecting materials with us?

My sculptural works typically combine craft, fake industrial elements, and natural or found objects. I select my materials depending on the project, and the extent to which I want to stress the contrast between the fake and the real, the crafted and the readymade. My interest in transformations and surprises has led me to work with unpredictable materials such as dough or unmeasured jesmonite and concrete. While this process can often be maddening, I like the sense of uncertainty and not knowing what condition I will find it the day after. It feels important to employ cheap and accessible materials, so that even if the sculpture is monumental, it does not take itself too seriously and maintains its playful qualities.

Off the top of my head I can think of two, although I’m sure I have many more!

When I begin working on a new project, I sometimes forget that I am a human who needs to eat or sleep, and I think I become slightly mad... As I often work filming other people, this comes to affect my directorial skills and can often end up with the actors feeling a little lost and losing patience with me because they are unsure what they are supposed to do.

Is there anything you can’t live without in your studio?

I wish I knew what is in my studio right now. My studio is a mess; I have huge drawers that have a special effect of concealing things, a cabinet that I am afraid to open, and huge totem poles that make it very difficult to move around. I guess I can't live without my ladder, which also functions as a chair and as a shelf. When I want to feel Zen and escape, I often climb to the top and look around, gazing out across the studio.

I am working on three separate bodies of work that may somehow come to blend together. The first project is part of a 3-person show at Peter von Kant gallery in London, and it will be a sculptural project based around ideas of ritual, monstrous artifacts and toys. Another project is planned for Switzerland; I won't say too much about it for now, aside from the fact that it will include gargoyles. The final, principal project is a video/performance piece of a nine-headed singing creature that will make up part of a sculptural installation at my upcoming Masters degree show.

Well...I am addicted to working collaboratively, and constantly looking for people to film :)

For more of Naeh: miriamnaeh.com