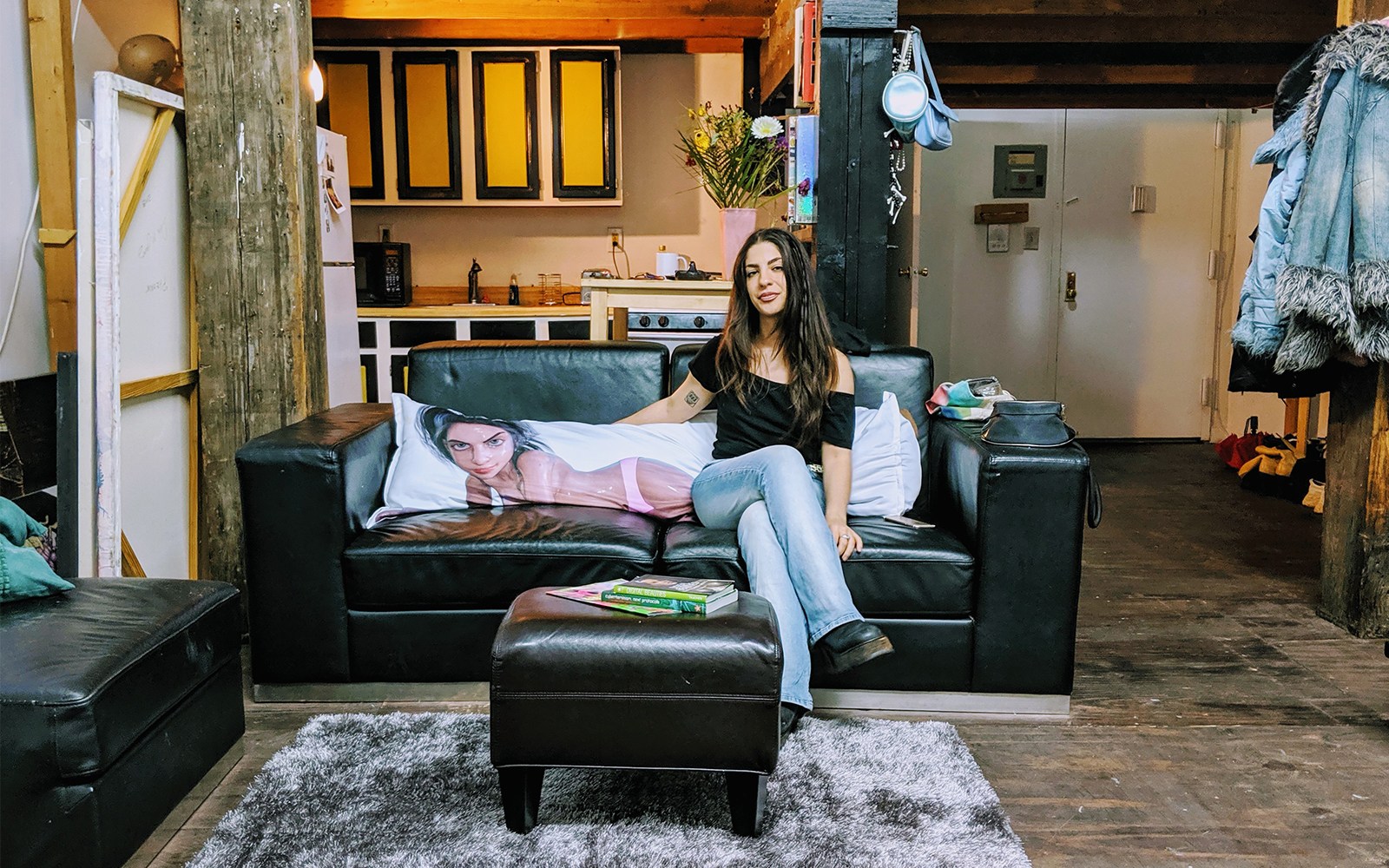 Emma Stern combines a deep commitment to traditional painting and drawing with an interest in digital media, resulting in a kind of contemporary portraiture made possible by new technology. She lives and works in New York City.

Hello Emma, we are so glad to have you on De:Formal. Can you start with telling us about yourself and your studio practice?

Hi De:Formal, thanks for having me. I'm  Emma, I live in  Brooklyn and I make paintings. The body of work I have been building over the past several years combines my background in figuration working with traditional mediums like charcoal, pastel and oil on canvas, with my interest in new media, resulting in a kind of contemporary portraiture made possible by 3d rendering technology.

My goal in making  this work is to aggregate, emphasize and then re-purpose the apparent inclination towards pornographic (or at least porn-adjacent) representations of female characters in online 3d communities and gaming culture.

How did computer rendered figures first become a subject matter of yours?

I think this can probably be traced back to my childhood, a likely result of my biologist father encouraging an interest in human anatomy. I have always been interested in bodies. In art school I worked almost exclusively from live models and built up a portfolio of really academic, neo-classical figure paintings, supplementing my studio time with anatomy courses. I originally thought I would be a medical illustrator, but I really fell in love with oil paint as a medium. However a few years in, I began to feel stifled by the lack of contemporary context for this genre of painting, and as a female painter felt uncomfortable and unsure of where to place myself within the tradition of the female nude. This was compounded by the fact that I had been working part-time as nude figure model for drawing classes at the Cooper Union, and although I had become increasingly aware of the historically imbalanced dynamic between artist and muse, I couldn't help but romanticize that relationship.

The switch to working with 3d models rather than live ones really came from necessity. When I graduated, I was broke and kind of confused about what came next, selling weed to afford my little studio that was barely big enough to fit two people in it. Around that time I was serendipitously introduced by a gamer friend to some basic 3D modeling and character design software, and I saw the opportunity to deploy my formal background in figuration while addressing contemporary issues of femininity, identity, and transformation within the context of avatars and virtual selves. Through this process, I found I was able to create, customize, and modify my subjects, ultimately creating a variety of virtual models as subjects for my paintings and allowing me the opportunity as a female painter to reimagine the relationship between artist and muse as has been defined throughout art history.

What is your process like? Do you render 3D model(s) for each painting?

I begin by using 3D software to custom design a female figure, which is then placed into and posed within a virtual environment, essentially a virtual sculpture en situ, which I then use as a reference for painting. Like live models, virtual models can be navigated around and understood volumetrically, but unlike live models, may be perpetually reconfigured. I work back and forth between a few different programs, and I use a lot of pre-loaded assets and "base characters" but also spend a lot of time tweaking and toggling. Taken to an extreme, these transformations and modifications can veer into the domain of fantasy, wherein erotic, cartoonish, mischievous or angelic characters occupy spaces in which otherworldly and realistic elements coexist in a single composition. The fantasy has become the most interesting part of this subject matter to me, especially since this software is heavily utilized by the 3d fetish community, whose visual vocabulary I borrow heavily from.

From body shape to minute facial singularities to placement of fingers, even strands of hair can be toggled on a modular scale within these programs, giving the illusion of unlimited variation. But in reality, the extent of variation is dictated by the predetermined limits of the software's framework, and therefore the preferences and biases of the software’s designers. The constraints imposed on virtual female bodies within the context of the largely male-dominated arena of technology is of particular interest to me as I expand upon this body of work.

Despite heavily influenced by the digital space, your work has strong emphasis on the way natural light interact with the physical world. How did that come about?

This is a really interesting question, because I mock-up all of the lighting set-ups for my compositions in 3d along with the figures, so it's actually a simulation of natural light interacting with the physical world. If you want to get really deep into it, there are all kinds of settings you can mess around with, like for example you can control how many times a diffused light source bounces back and forth between two adjacent reflective objects. In the physical ("real") world, this would happen an infinite number of times, eventually becoming imperceptible to the human eye, but sometimes I like to set it to a really low number like 7, which makes the scene totally surreal in a way that you can sense something is off but can't really articulate what or why. This  consumer-grade technology is so powerful that you can quite literally build a whole universe that operates under it's own customized laws of physics. It's a virtual reality, which is such a trip to think about, because I had the realization recently that painting is a primitive kind of virtual reality.

The lighting is something I began playing around with a lot more recently as a way to describe space without adding clutter. I've become interested in more stripped-down compositions that transmit a lot of information without describing what you're looking at so literally, and light and shadow are really powerful tools for that. I am also really influenced by Italian Renaissance painters, who are the absolute masters of light.

How do you decide who and what to paint?  Are there any narratives behind the "characters" in your work

The short answer is, they are all self-portraits on some level. Avatars are altar-egos, and there's no reason to not have one for every mood.

More than narrative, I am interested in the idea of tropes. There are these recurring female archetypes or characters or whatever you want to call them that appear all throughout history but are especially pronounced in the world of 3d fandom and pornography; the cheerleader, the cowgirl, the pin-up girl, the bimbo, the secretary, the girl next door... and then when you start involving all these niche internet/gamer subcultures, you get these fantasy elements and wind up with the slutty elf, sexy centaur, warrior princess, etc. All these characters are are recognizable even if you've never seen them before, so they have their own narratives in a way because they are archetypal.

Typically in this context, these female characters are stripped of context and identity, as they are simply vessels for (usually male) pleasure. By painting portraits of these generic, idealized figures which lack essential personhood to begin with, I hope the viewer’s own humanity is reflected back to them in the subject's eternally vacant stare, thus imbuing these otherwise empty vessels with subjectivity rather than removing it.

The formal qualities of your paintings are exceptional, what was your training like when you first started? Who did you look up to?

Thank you! As I mentioned above, Italian Renaissance painting was big for me. One really apparent way it influenced me is obviously the chiaroscuro, the high contrast/high drama light and shadow that Caravaggio and Da Vinci became renowned for.

Another homage to the Italians that may not be as obvious is the super traditional multi-layered method I use to achieve that kind of glow-y quality with the paint. It involves a quick charcoal drawing, then a monochromatic underpainting, and then lots of thin layers of color on top of that. Then I go in with a fan brush and buff the heck out of it. This process is all conducive to a sort of erasure of the artist's hand, it completely obscures any brushwork, which we see more and more of now because airbrushes are very trendy at the moment but I think there's something really tender and potent about physically touching the canvas and then erasing the evidence. Something almost tragic about it. The Italian Renaissance painters worked this way to mimic the perfection of God's creation, and I guess I'm doing it to mimic the perfection of a computer simulation. So, same thing basically.

I was really into Dada for a while, which I think helped me realize the importance of humor in art. I have a Marcel Duchamp tattoo on my butt. I also spent a lot of time looking at the Surrealists. I think the whole genre gets a really bad rap from art history snobs, because it's a painting movement that didn't actually invent a new way of applying paint the way expressionism or impressionism or even pop art did. It just co-opted a pre-existing visual language and applied it to a strange new subject matter. But I don't see anything wrong with that, and I think it takes on new relevance in a contemporary context, because at this point in our perpetually recycled culture, everything is borrowed from somewhere else.

I don't really listen to music in the studio because 99% of the time I'm listening to audiobooks or podcasts. I recently just finished listening to Mary Shelley's Frankenstein and I cannot recommend it enough. If you're into science fiction even a little bit it should be required reading. Tim Heidecker does a batshit crazy podcast called Office Hours that has had me crying laughing at times.

Do you have any studio rituals or routines to help you get in the art-making headspace?

I usually don't start actually working until around 1 pm everyday. I always paint barefoot and I have a smock I always wear, so once the smock is on and the shoes are off, I'm in business. Then once I get started I like to work really intensely without breaking for 4-6 hours. Then, I have a glass of wine.

My absolute worst habit is never cleaning my brushes until it's way, way too late. I also have a tendency to over-caffeinate, which I don't think affects my work but probably affects my life expectancy :(

Yes! I won't say too much about it because it's still very much a work in progress but I am very excited to begin working with sculpture this year. It's definitely a no-brainer next step, since I have all these virtual sculptures floating around on my hard-drive as artifacts from paintings I've made, so I'm really looking forward to coaxing them into physical space. It's like sorcery.

What is your spirit animal?
An amoeba.

Is there anything else you would like to share with us?
Jet fuel can't melt steel beams!