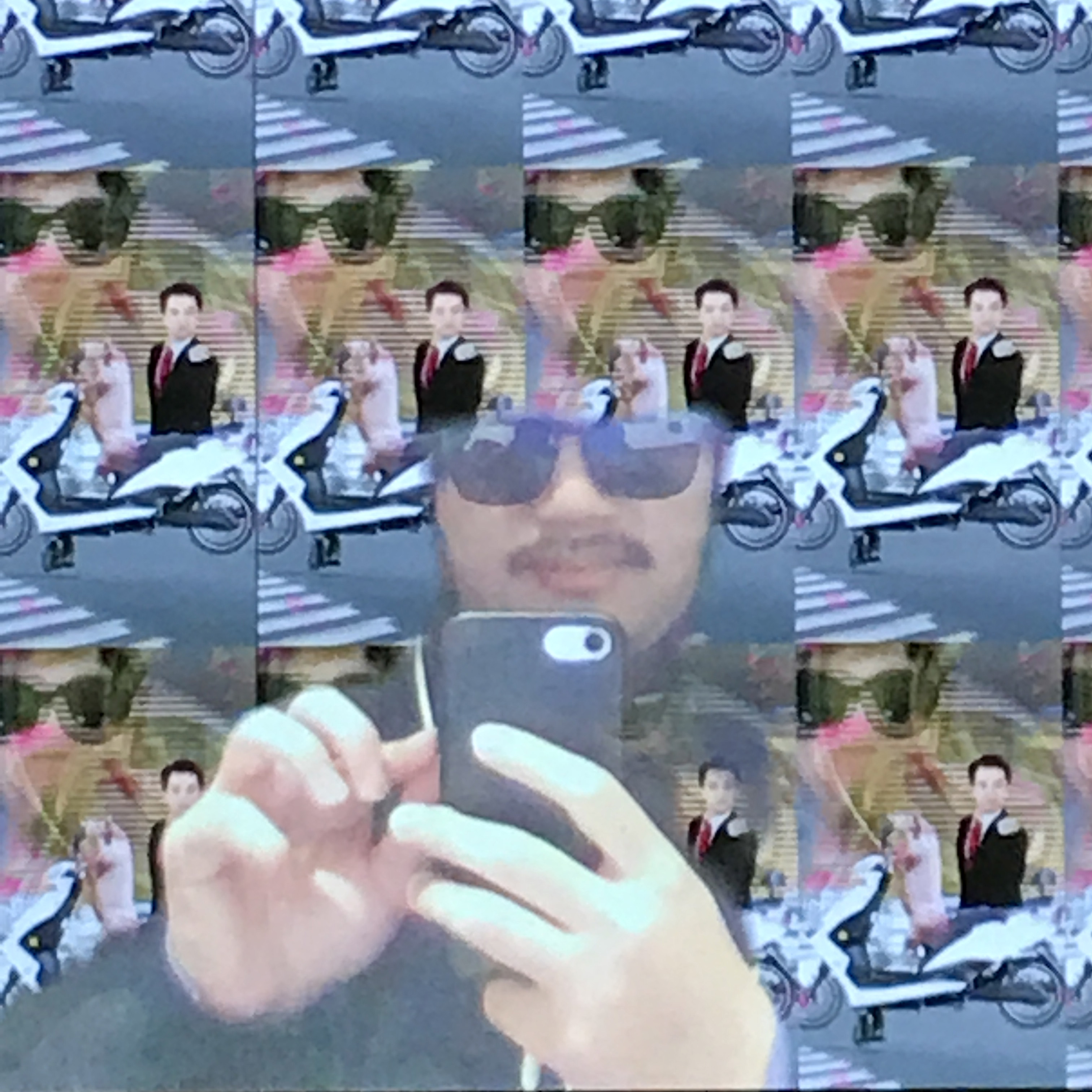 Chengan Xia is a visual artist and graphic designer based in Chicago and Shanghai. By utilizing printed matter, photography, video, and installation, his work celebrates the “trash aesthetics” born from Chinese low cultural phenomena. With the methodology of appropriation, collage, and building ironic narrative, his work critiques the fetishism manifested in such culture, which involves broader discussion of consumerism, technology, tradition, and politics. He received his MFA in visual communication from the School of the Art Institute of Chicago.

Hello Chengan, can you start by telling us a bit about your background and its influence on your practice?

I was born in Shanghai and just finished my MFA program in Chicago. I’ve learned graphic design for a long time, my art practice started from creating “more is more” aesthetics as a critique on “less is more” design philosophy.      Starting from here my interest turned to some “vulgar” or “trash” (often judged by the official and educated people) contemporary Chinese social phenomena. To name a few, Chinatown tourist commodity, military training routine imposed on company employees, “superstitious” funeral rituals, etc.

How would you describe your work to someone who has never seen it before?

Your work is often a mixture of printed matter and moving images, how did that come about? Do you approach prints and videos differently? If so, How?

Because of my graphic design background, prints and books have become my default form for a long time, so I want to try something fresh by learning 3D sculpture and moving images. But I don’t think my videos are different from my prints cause I don’t intend to put narratives in the videos so they can be treated as some kind of moving texture.

What is the art scene like in Shanghai compared to Chicago? Does your physical location affect your work in any way?‍

I think Chicago is quite traditional and political, while Shanghai is really commercial, and sadly not as innovative as I expected. But it doesn’t affect my work at all.

Can you tell us more about Everybody Wants to Hear What's Already Been Told?

It’s a project kind of hard to talk about, because it’s a collection of my previous projects. Like I mentioned earlier, most of them are inspired by social phenomena. The tombstone centerpiece is project Heaven. net, which talks about the trend which traditional Chinese funeral rituals has been moved online and what a “digital burning ceremony” means to a virtual funeral. The bug sculpture is project Galloisiana Sinensis. I used a bug to invent a brand new Chinese symbol, which discusses the invention and commodification of Chinese cultural symbols. The waving hands image is project Aesthetician Tells You Why Artists Need Team Vitality, which studies the collectivist training routines in some companies and critiques how such communist legacy has been reused by Chinese entrepreneur as a means of exploitation. While the background pattern is an earlier experiment, which I used tabloid aesthetics to make a magazine of my own.

Visual similarity is of course one of the reason I put these projects together. But more importantly I found all the subject matters are about fetishism. They are all about commodities and desires, but with strong Chinese characteristic. These social phenomena shows the conflict and blending of tradition, politics and consumerism during the modernization of this country.

What are the main concepts and ideas behind the work you created during the residency at De:Formal?‍

Laser Rain, the project I’m working on is about “Tuwei”(土味). Directly translated as “dust taste”, Tuwei describes a rural aesthetics which fails to meet the taste of urban mainstream in China. The aesthetics is frequently used in video app Kuaishou(快手), a rural version of TikTok, which is especially popular among young rural population.

Besides the raw visual quality, What interested me about Tuwei is its definition. Tuwei is in fact a very vague word, it can describe forms that have no visual similarities : it can be a meme, a filter, a special effect, a dance move, a rap style, a short drama, etc. Then what makes a Tuwei video? Content makers form villages or the rural background? I thought about this for a long time and my conclusion is that, it is not just the rural environment that makes a Tuwei video because Tuwei is quite different from the common definition of rural aesthetics which evolves natural scenes and organic lifestyle, but the “rural imitation” and ”rural appropriation” of urban lifestyle that create this unique aesthetics.

If you watch a lot of Tuwei videos, you may find some scenes have clear pop culture references. Young boys dressing like gangster members and dancing on a square reminds you of Hong Kong gangster movies like Youth and Danger; A girl finding her boyfriend cheating on her and slapping him in the middle of the road reminds you of Korean soup operas; A swordsman fighting back some punks in modern city is a mixture of time-travel drama and martial art movie; Children singing and using costume filters is inspired by some Chinese costume drama. All those imitations are in low budget, and the rural scenes often revealed in the background. I found this kind of imitation and appropriation of pop culture fascinating because I felt some ambiguous emotion in it. On one hand, the acting is exaggerated and scenes are cliche, which reveals content makers’ lack of skills and desire of getting attention, but on the other hand, the particular themes they imitated hints their sincere emotional needs. The power of gang bosses and swordsmen is what they are longing for, while a relationship, even a failed one reflects the need for love —- Power and love are exactly what village teenagers are lack of in real life. Such imitation of pop culture reflects Tuwei creators’ imagination of a fancy life, or more specifically, the imagination of urban life. So this is what Tuwei interested my most and this is how I define Tuwei: a rural version of urban life. And that’s why imitation and appropriation become the main theme of this project.

The other interesting thing is how the meaning of Tuwei transits from rural population to urban population. Tuwei maybe means an emotional expression for rural population, but the word was initially a negative word invented by social media users in the cities which satirizes the poor taste of rural people. However a bunch of urban teenagers (and artists like me) found such unique aesthetics and tried to turn the negative judgement around.Tuwei, the aesthetics which appropriates city culture has been reintroduced to the city and has become a new kind of grassroots subculture. From this perspective, I found it interesting to compare Tuwei with other grassroots culture such as Punk and HipHop (But I’m pessimistic about Tuwei becoming the Chinese version of Punk or HipHop).

Back to my visual work, I spent a lot of energy balancing “participation” and “analysis”. I want to keep the vitality of Tuwei culture, but don’t want my visual work to be too easy and obvious. The work is mainly composed of my own images participating in Tuwei aesthetics: trying a lot of filters, using special effects and forming Chinese characters with my selfies. And I chose to hide my analysis in several parts : First, most importantly I categorize Tuwei appropriation into four genres: gangster movie, marital arts, soup operas and costume drama. The second is comparing some movie clips references with the appropriated Tuwei ones. I also added more “rural” elements in the video by directly appropriating natural scenes Kuaishou users shot and by cutting out the still image of village buildings. What’s more, the sentences I showed in Chinese characters are mostly pop song lyrics, which expresses fragile sentiments.

Fashion brand Balenciaga released a controversial campaign back in August that was accused of insulting Chinese people's taste and culture due to the aesthetics of the campaign. We're interested in your opinion because you describe your work as a celebration of the “trash aesthetics” born from Chinese low cultural phenomena. Do you have any thoughts about the campaign?

In terms of the aesthetics, I can totally get Balenciaga because that’s what I was doing as well. But I suspect the Balenciaga’s intention of appropriating the aesthetics. For me using such aesthetics is, on one hand, an oppose against the elite, high art taste, and on the other hand, a visual study on contemporary Chinese society where I’m living in. But as a Western luxury brand, what is Balenciaga’s position of doing it? Who is the target consumer? The working class in China who truly appreciate such “unsophisticated” aesthetics cannot afford it. So can we suspect that Balenciaga is trying to sell an exotic Chinese image to the West? I understand that this campaign only happened in China, but the marketing strategy for me is clearly orientalist—which is exactly why it caused so many accuses among Chinese consumers.

What is your process like? Can you walk us through some of the creative processes of your work?

It usually starts from getting visually inspired by a social incident. After some primary visual experiments, I will do some research to find out the cause of these incidents. It’s really interesting if you see these incidents in a larger picture and locate them in the history of contemporary China. But for visual demonstration, I tend to hide my research and keep the impulse I initially got. I usually present my visual work through the methodology of celebration and irony.

What is your dream project in a perfect world with unlimited time and budget?

I got two. First is making a large manuscript which contains socialist political propaganda in medieval style, the other is filling a factory with wallpapers, screens, projections and objects in my “more is more” aesthetics.

Anime/Manga Demon Slayer is great! It reminds you of Naruto and Bleach but the pace is much faster and the story is much crueler.

Do you have any bad habits? How do they affect you and your work?

I get distracted easily…I really need to be more efficient to meet deadlines.

Is there anything else you would like to share with us? Any facts our readers can learn about you?

I love classic rock and religious music. I really want to compose music of my own but sadly I have zero knowledge about it… I’m very much interested in collaborating with sound artists!