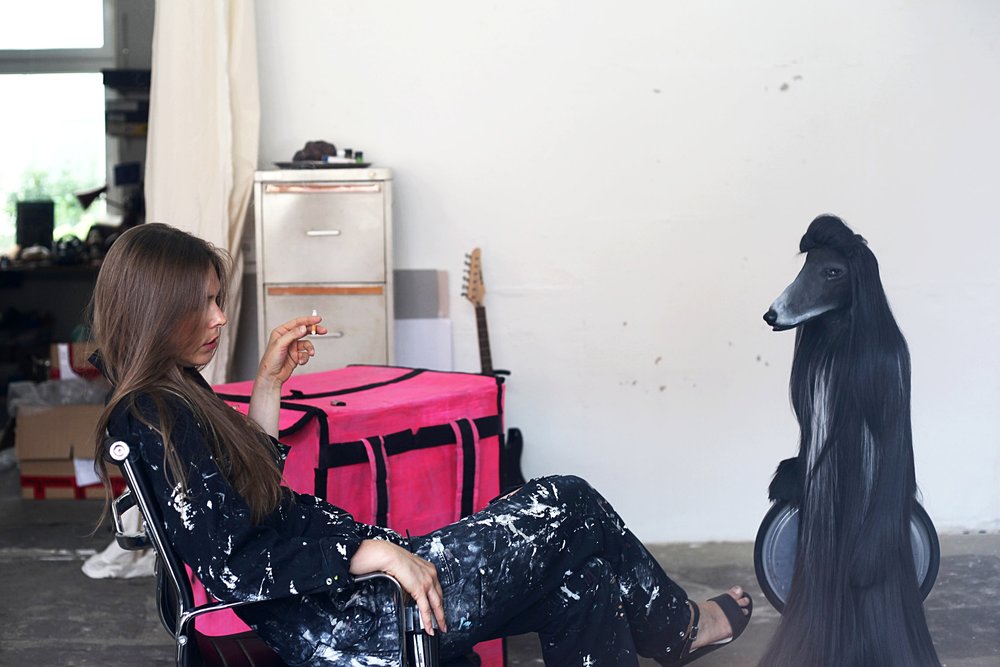 Anna Lucia Nissen is a German artist working in Berlin. She works across installation, sculpture, performance, video, sound and text. In her work she is examining the constitution of the human body trapped within the claws of neoliberal capitalism and their humorous but tragic attempts of liberation and escape. By looking at the role of rituals and symbols of our time, her interest lies in how the eeriness of desire and disgust towards objects of the consumer culture can take shape. She has graduated from the Städelschule Frankfurt am Main (2015) and received an MFA at the Glasgow School of Art (2015).

Hello Anna, can you tell us a bit about yourself and your background?

I live in Berlin, where I first studied one year stage design / theater at the UdK Berlin but than changed to Fine Art studies, which I completed in Frankfurt am Main, at the Städelschule. I was lucky to study one year abroad at the Glasgow School of Art. Most of how I work now has taken shape in my exchange year. In Glasgow, I met artists that work with music, film and theater elements which felt very liberating. And of course the way British artists use humor is something I find magnificent. Last year I participated in a one-year long postgraduate program here in Berlin. It got better at talking about my work, through practicing in lots of studio visits and opened up the Berlin art scene to me.

I see my practice as a form of contemporary folklore: Every project is kind of a generation in itself. It has its actors, its mood, its landscape. Then the following project is different but you will find traces from the previous project. Like a generation-spanning heritage, where things have been passed on within that cutlure. So now things might have become bigger, materials might have been exchanged or a new character might have been introduced. But the interest that connects the projects to each other is how the constitution of the individual is shaped within our socio-political structures. Therefore, I am interested what we call “reality” and its antagonist, the “surreal”, and its forms of eeriness. By blending them into each other I create an alternate environment that gives me the possibility to evade defined power relations. My protagonists are hybrids of humans, animals and commodities from our daily life: mouthed cigarette packets, delivery backpacks on a phone call, smoking onions... Their actions are reduced and repeated to reveal their inherent moments of comical sadness. My work is at the best both: humorous and really serious. In a time, where everything, our bodies, the way we spend our time, became controlled and predictable, I see them as a form of humorous resistance. They rise up and say : “You world, created me, I am just a backpack with legs, but I don't function like you want me too anymore, I'm exhausted, I don't go any further, I'm done, fuck off ! ”. My work is about a subtle way of liberation. But in the dawn, not during the day. Under the moon rather than the sun. It is for me of importance that the viewer has a physical moment of sensual immediateness. For this reason I work with live events, sound and big projected videos to immerse the viewer. I do not want to make people feel that “didn't get it”, so in my work there is everything you need.

Some of your works are combinations of video, performance, and sculpture, how would you describe the relationship among them?

I have an urge to inspirit objects because movement is very important to me. So my sculptures always need a catalyzer. That might be the human body wearing a sculpture or a video projection like in the work “Not We”, where I projected text onto the sculpture. This helps me to extend the possibilities of narration. I use video in a performative or in a sculptural way and I find it interesting what happens when these mediums merge together. The Film “((((((0))))))” is in fact coming from a previous performance work and is meant to be projected in a wall filling size. In this way it relates to your body like a performance does. Having studied stage design for a while, theatrical traces are still visible in my work. But in opposite to the black box of a theater with a defined stage / audience separation I try to blend the work into the environment. I really want to reach this moment of “stepping into” something as a viewer. That's why I try to avoid showing anything on a flat screen for example.

We enjoy the sound in your work a lot, do you create them yourself? If so, what is the process like?

Yes, I make it myself and together with my partner. We have a music project called “Womanmann”. We made the soundtrack for the film “((((((0))))))”and we worked together on the sound for the “Therefore 02” performance. I sometimes use music from other musicians as well, as for example I played a song in a car radio, when I once used a car in a performance or the text in “Therefore 02” is partly from the song “Walking the dog” from Rufus Thomas. I mostly write the lyrics and find some bass or drums. My partner is terrific on the guitar. He makes beautiful guitar melodies. But my main instrument is my voice. I have a huge interest in the form of song lyrics and the human voice in general. I approach words the same way I deal with sculptures. I enjoy to emphasis them in different ways, shaping them. The form of the words is as important as their meaning. Like Blixa Barged said: “A text is something you can move yourself around in...a space one creates in which I can move around and other people can move too.”

Can you tell us more about "Therefore 02"?

The work functions like a 3 dimensional song. It was made for the CCA in Glasgow, UK. It tells the story of the smuggler that brought the first Afghan Hound to Europe in 1920. It arrived north of Glasgow. Afghan hounds are the oldest dog breed that now have become kind of Barbie, but also they do look like ghosts somehow. I was interested in this polarity and the aspect of docility and taming, also in relation to feminism. The bass sound I generated with ordinary hairdryers, a device very bound to an Afghan Hound of course. I pitched them down, so they filled the room with a vibrating drone sound, you could feel in your whole body. The smuggler spoke a prologue and I performed a text based on the song “Walking the Dog” from Rufus Thomas from 1963. The work asks about the connotations between being dominated and docile. What does it mean to walk a dog and what does it say about a culture that breeds animals — to fit and cater human needs. Is not also a woman supposed to cater the needs of others and be of poised elegance — similar to that of an Afghan hound?

How do you title your work?

That depends on the work itself. An example is “((((((0))))))”. The title shows the cross-section of an onion. Onion has seven layers and reveal nothing inside. So I chose six open brackets, a zero in the middle, and six closing brackets. The film itself has no words as it is working with lots of symbols. So I was searching for something more abstract than a word or a sentence. In this way the title now works on the same layer as does the film.

When I don't know what to do I always clean and rearrange my desk, my chair and move my sculptures around. When I m done sit down with a Cola light from a glass bottle, a cigarette and enjoy my clean studio and my new perspective from where I look outside the window. The people looking inside the window (I work in a former video store shop window) from the street than see me surrounded by dogs, onions, and an oversized pink rucksack and find that very funny. They always smile.

What artwork have you seen recently you find interesting or different?

A totally amazing one: “Nightlife”, a 3D film by Cyprian Galliard. I am normally not a big fan of needing to wear 3D glasses but in this case it was totally worth it. The film is very hypnotic, soft but wild, even brutal at the same time. It shows these Hollywood Juniper trees that get kind of anthropomorphic as they hit against the fences. Also the footage filmed with a drone, when you find yourself in the middle of a firework above the Berlin Olympia stadium is such a powerful image! It is accompanied by a dub remix of Anton Ellis “Blackman´s World” only featuring the chorus of the song repeated throughout the film : “I was born a looser”. It is very a multi-layered work though, symbolically as well historically and took him 2 yeas to film. But the key thing is, that you don't need to know that before watching it. It uses the power and magic of the image in such an impressive and smart way! I will go and see it a second time.

I am obsessed with the Neolithic Revolution and its Megalithic monuments as a form of frist drama and theater in relation to the movement of the moon and the sun. I have seen every documentary about it existing, so I'm out of material!! If a documentary filmmaker reads this, please, please make a new one and get in touch! A series with that topic I could imagine to be cool as well! Also, I m doing a show in Leipzig, Germany, at BSMT, opening September the 7th. Come by, you're gonna be totally immersed!

For more of Nissen: annalucianissen.com