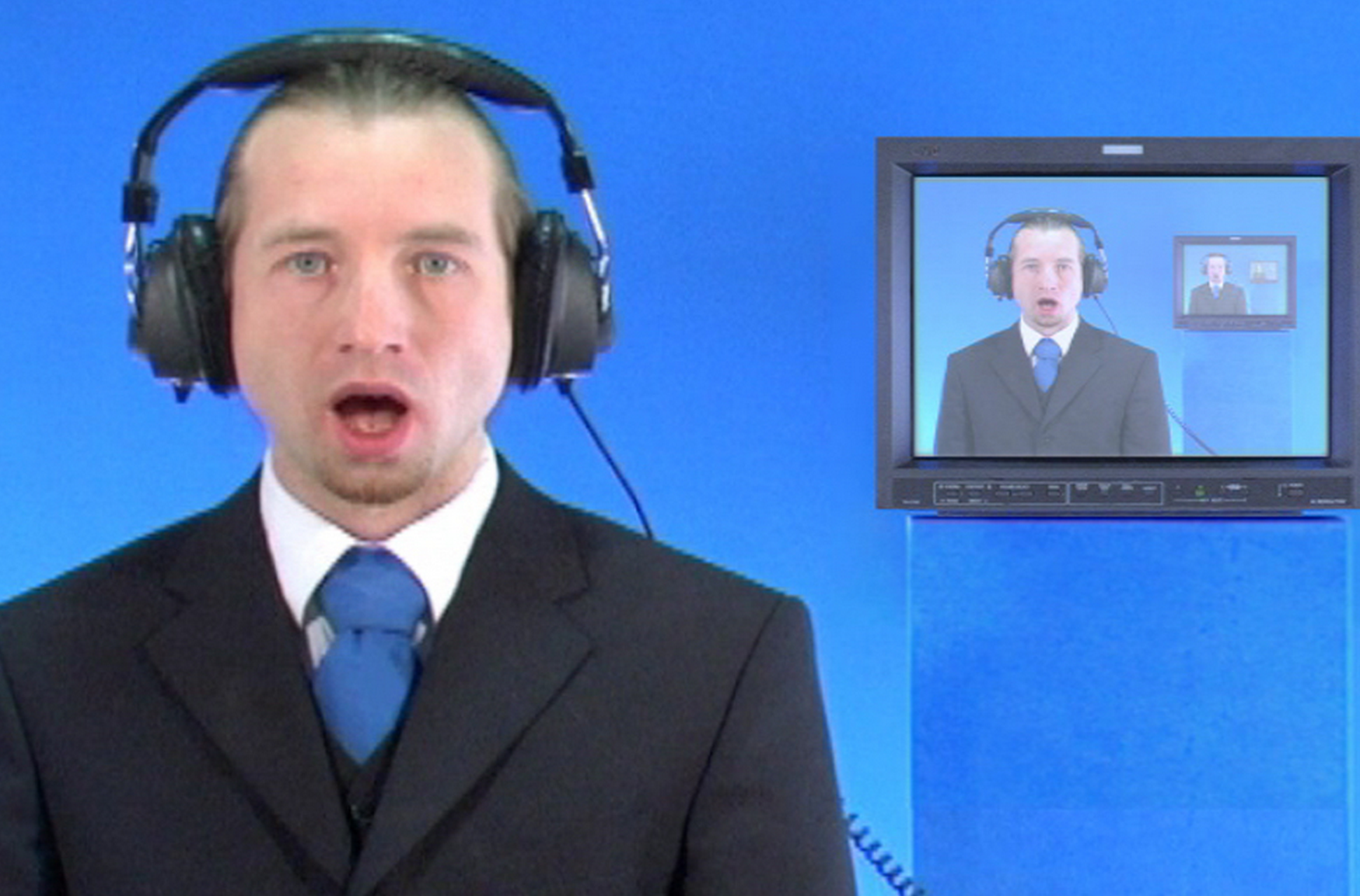 Andrey Ustinov was born in 1975 Luga, Leningrad region (former USSR). He is currently lives and works in Cologne / Germany.

How would you describe your art?

I have a special term for the business I'm in: Secondary Art. SA is art that goes unnoticed at first. More specifically, it's the art of observing the process of perceiving. To make the perception visible or hearable, I assemble image or sound-reproduction constructions out of context-specific components. These constructions become technical extensions of the natural senses. A heartbeat becomes a drum, like in my performance „Heart Dance“, a mouth becomes a loudspeaker, like in the project „Medium“, ears become a TV antenna, like in „The Mobile Séance“.

SA is a thing that hardly anybody would call culturally valuable, but which has an explicit practical use. SA can light up, be a windbreaker, synchronise TV-sound, measure noise, supply electricity, and so on. Cultural value in respect to art is very disputable. There's no supreme court to objectively determine the cultural worth of a piece of art, if at all. On the contrary, the practical application of things is determined by the specific situation, on subjective perception. Not everybody would appreciate the artistic quality of a picture, but every picture can cover up a hole in the wall. The primary quality of a thing is its practical use, its added cultural value is secondary.

First and foremost, my art pretends to have practical applications. I don't specify the function, but rather allow the perceivers determine it. My performances and site-specific sculptures are designed as functional public tools, each person is confronted with their own choice of application. “The Luminous Box”, for example, was a site-specific work in a wasteland in Cologne-Kalk, which featured a photo of itself on luminous film in the front frame of the box. The photo depicted the box itself and parts of the surrounding area where the box was originally found. I left the guests alone to find their way through the darkness, to have their own experiences and to define their concepts of the site's function. My projects aren't spectacles, but situation-based experiments, psycho-geographical research, where the unique guests' reactions are the only true project content.

SA is not inventive, it's just a repetition of all the things artists do: performances, sculptures, short films, drawings, photographs, video installations and site-specific projects. I work with polarities such as “public display” versus “personal views”, “public tool” versus “personal use” and “public fascination” versus “personal disappointment”.

Could you tell me more about The Heart Dance? What made you come up with that project? How did it begin?

“Heart Dance” is a project about honesty, about ethical transparency, about democracy, if you will. I was searching for a simple technical solution to reveal personal truth, some kind of a polygraph, a lie detector, or, to be precise, a guarantor of truth. The heart is in Christian cultures a mythological source of truth. They say: “I listen to my heart”, “my heart told me”, “follow your heart”. The heart is a kind of all-knowing mystical oracle. This oracle doesn't transmit its knowledge by means of verbal or written language, but it uses the language of feelings. To follow your feelings is to do right without reflecting on it intellectually. I thought, what could be truer than my own heartbeat and acting on (dancing to) its rhythm? “Heart Dance” is nothing more than a simple broadcasting of truth.

Actually, the themes of “truth and lie”, “source of truth”, “language of truth”, “transparency”, “language and body” have been following me since the beginning of my art career. In 2001 I did a video performance called “Moses”, where I read the first verses of the Old Testament book of Genesis aloud. I kept reproducing the text as I repeated what I was hearing through my earphones: the previously recorded versions of my reading aloud. Each new recording transmitted worsening errors, which I repeated until the text gradually became unrecognisable. From 2001 to 2003 I worked with artist Yuri Popov on a series of performances called “Medium”, where I was employed as an oracle, relaying audio stream from television programming fed through my earphones in the sales department of an electronics store chain in St. Petersburg and Moscow. Again in 2007 and 2008, I did a European series of performances called “The Mobile Seance”. Using the same principles, I relayed spiritual medium experiences from a wheelchair.

“Heart Dance” was a further development of these concepts. Instead of verbal language I used a body language of feelings.

What is your most important artist tool? Is there something you can’t live without in your studio?

I have no studio. If I can live without a studio, I can live without a thing in the studio that I don't have. My most important artist tool is also located in the studio that I don't have. I would be very curious to know what kind of tool it would be. Since I have no studio, my most important tools are public tools of the city: light boxes, billboards, loud speakers, video displays, public utility employees or my own body, of course. For my everyday work I use a camera with GPS-capture for local records, paper and pen to do sketches and graphic apps for editing on the computer. Without those last three tools my work would probably be difficult.

Are you working on some new projects these days?

Yes I am! A few months ago I started working on a map of free sockets in Cologne. I had discovered that there are many functional electrical outlets in the city which aren't necessarily known to all. The sockets must have been installed at some point for some specific and temporary purpose, but weren't dismounted or shut off. Mostly they go unnoticed by passersby. They're behind billboards, under benches, near construction sites, in grocery stores and fast food restaurants, at gas stations, in public washrooms, all over. They're free sources of energy available to everyone.

I add all found sockets to an online map. Each entry is complete with notes detailing the exact location, access hours and a photo of the socket lit up by a spotlight, which of course, is powered by the socket itself. Once the map is ready, I plan on installing it on public information boards around the city of Cologne as well as offer it in printed form.

The project is called “Open Power”. That's a play on words: power as energy, and power as authority. I'm an anarchist. This project is a metaphor for a common good economy.

What is humor to you? How important is it in your artwork and life?

Humor in art was a very important discovery in the Renaissance and the period of Enlightenment. Humor became a critical medium against the clerical and feudal culture. Rabelais and Boccaccio wrote in an especially accentuated funny way to oppose the total seriousness of religious literature. Humor was also an especially effective medium for modern art of the 20th century to oppose the total seriousness of the state propaganda:  Dadaism arose in Switzerland, OBERIU in the Soviet Union. Humor has always been a medium of liberation. But in the postwar period, after the Holocaust and atomic bombings in Japan, it was not amusing anymore.

Postmodernism established humor as a mainstream medium of the global neo-liberal culture. Being funny, to joke, not being serious became the new usual behavior. This global fun could be perceived as a sign of global freedom and satisfaction on the horizon. But our contemporary world is not funny in the least! Actually, we are living in extremely tragic times. Off the radar of mainstream liberal media, horrible wars are happening worldwide. Thousands of refugees on their way to Europe are prepared to risk drowning in the Mediterranean sea, just to get away from the Arabian Peninsula and Africa! Transnational corporations in collaboration with corrupt national politicians monopolise all common goods! Banks and international financial organisations blackmail the governments! The ecological situation is catastrophic worldwide!

I shy away from the postmodern total irony towards the new seriousness. I've returned to such existential themes as fear, pain and frustration.

What else should we know about you and your work?

Maybe I should misuse this interview to call on the readers to support my project: “Open Power” - Map of free sockets Cologne. As I said, it's a social project aimed to share open resources. To spread awareness about the free sockets in Cologne, to make this project available for everybody, I have to produce a printed edition of the city map and install public information boards with the map around the city. That will incur some financial expenses, of course. I am convicted that projects like these are ordinary civilians' tasks. I will organise project fundraising on my website and in form of offline events, and every supporter would receive a special thank-you gift from me.

In general, my artist aim is to create common projects with society, to move away from the creator-artist, genius-artist, author-artist towards an artist as a social initiator, as a companion and participant. My friends go on walks with me to look for sockets. Try it yourself, it's fun and a good form of exercise and entertainment! I welcome everyone to work on this project with me!