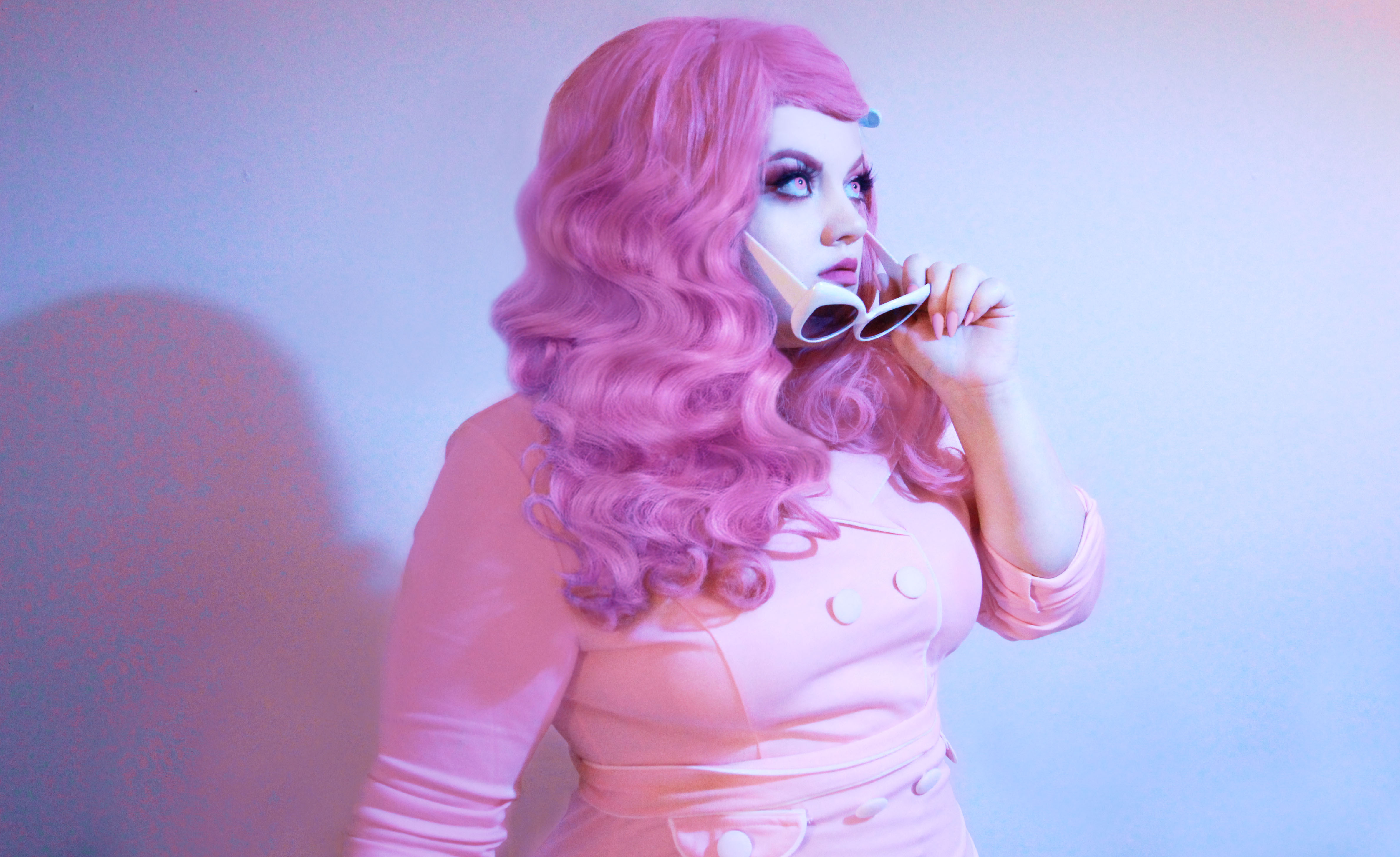 Ambie Drew, whose sole existence is to achieve a synthetic perfection. Exploring ideas around artificial intelligence and digital enhancements in an online environment to create a fluid overlap between fantasy and reality. She manipulate through the use of beauty gadgets and products to play on an amplified, kitsch femininity. Analysing the consumption of beauty through an objectifying gaze to capture the visceral and grotesque nature of feminine rituals. Drew's work takes form as a series of short, looping, experimental films that are presented as large, multi- screen installations.

Hello Ambie, we are so happy to have an interview with you on De:Formal! Can you start with telling us a bit about yourself and your background?

Hello! Thank you for having me! I’m based in Worcester, UK and I graduated in 2018 with a First Class degree in Fine Art. My practice is rooted in moving image, which takes form as large scale, multi-screen, looping films and more recently, expanding into sculptural installation.

What are the main ideas and concepts behind your work?

The main concepts at the forefront of my practice are fabricated femininity, gender and identity in the age of the internet. I’m interested in exploring ideas surrounding artificial intelligence and digital bodies. How do we exist through our digital selves? What becomes of women in these online spaces? And is visual appearance a form of digital currency?

How did you get into art? What led you to working with video, sculpture, and installation?

My earliest memory is watching Sailor Moon on GMTV at my great grans house. I remember jumping up from behind the sofa dressed up as a fairy, wishing I could be like Sailor Moon and magically transform into someone else. I think ever since then, transformation has subconsciously fed into my work.

I started getting into video during the second year of my undergrad degree. I was doing a lot of photography at the time and I wanted my work to be less posed and more performative in a sense, so I began filming and taking stills from the footage. That developed into me creating GIFs and very short clips that were a few seconds long. I then taught myself how to edit on Premiere Pro. Eventually that became the main focus of my practice and my work began to take form as experimental moving image.

I’ve recently become interested in expanding my practice into sculpture and installation to build on Ambie Drew’s existence outside of the internet/digital realm. That, and I have collected so much stuff! I have a vast collection of bizarre objects and props that feature in my films, That’s where the idea for Monstrous Feminine came from.

Can you tell us more about your installation Monstrous Feminine?

Monstrous Feminine is a sculptural installation that examines autonomous objects to explore how ‘femmetopian’ ephemera objectify the female body and physically inhabit a space. My digital persona becomes manifested as a physical object in the room to explore her fragmented existence in a synthetic, plastic reality. It bought together a life size doll that I dressed as Ambie Drew and all of my strange props and beauty objects.

It was an idea I’d had for a while but I was quite nervous to try installation since I’d never done it before. I remember discussing it with Cathy Wade who runs Black Hole Club who encouraged me to pursue it. It ended up being commissioned by Vivid Projects with BHC for a group show last year, which I was really grateful for. It all came together really well and is something I’m planning to expand in my upcoming projects.

What is your relationship with internet and technology? Does it have any effect on the relationship between you and your work?

The internet is embedded in my daily life; I find I’m either hyper aware of it or so totally immersed that I don’t notice I’ve been scrolling through Instagram for two hours straight.

Our phones act as digital sketchbooks, I write notes, read articles, download books, take photos, film ideas. It’s a direct source of research and inspiration that fits nicely in our pocket. But that’s not to ignore that our obsessive relationship with the internet and technology isn’t damaging.

Chloé Whitmore recently wrote a really interesting article for Imperica called ‘Are we being optimised to death?’. Which talks about how social media/the internet has a direct link to burn out, performance pressure and ‘optimising every moment.’ I do feel like we are stuck in this exhausting loop. We are as much our own voyeurs as everyone else’s, we are very self-aware of how we portray ourselves online which is intrinsically linked to my own practice and research. But as I mentioned, whilst I exploit it for my own creation I’m as much a slave to it in my ‘real life’ meaning I end up in this vicious circle and as a result exploiting myself.

What are your thoughts on social media and its growing influence on the contemporary art scene?

It has opened up a whole other world of artists and opportunities I don’t think I would’ve otherwise discovered; it connects us yet also simultaneously disconnects us. Something that unsettles me is the intensity and speed we are consuming this data. It’s obsessive in a sense, the need to feel plugged in 24/7 in case we miss out, it’s moving so fast and it won’t wait for you. To not be consumed by it is difficult, but to unplug entirely can seem like you’re cutting off your nose to spite your face.

What is the process like for your video work? Can you walk us through how you tackle piece from getting the inspiration to completion?

I find I struggle to exactly plan my video work scene by scene, I’ve never been able to do that. I do a lot of research and writing and I’ll begin to visualise something in my head, even if it’s just a single image and it grows from there. I avoid spending too much time trying to tie it down to a narrative, some of my ideas are a result of this weird performative ritual thing I’ll do where often it begins with me dressing up in my costumes and wigs and setting the camera up to record without any real end goal. I have hours upon hours of footage of me just existing in the space becoming Ambie Drew. I’ll go through the footage and reflect on that, do some more writing, end up with a bunch of questions and then thread together my thoughts.

There’s always a moment when it all falls into place. Whenever I make new work I always worry that I won’t have that eureka moment again! Although I find that with each piece I make, I end up with more questions, curiosity and confusion but that plants the seed for the next one and so on, so I hope I don’t lose that. I almost don’t want a finite answer.

What is your studio like? Is there anything you can't live without in your studio?

My studio is a spare room in my home, which is extremely convenient but also means I cannot escape it, thankfully I can close the door and have a degree of separation from it! Although recently, I’m rapidly running out of space and it’s starting to seep out of the room. But I know I couldn’t live without having a private space to make the work. As much as I would love to be in a shared studio I don’t think I would be very productive!

Do you have any daily rituals that get you in the zone? If so, what are they?

Hmm, probably doing my makeup every day. I ritualistically sit in my studio in front of 5 mirrors with studio lights to do it which is a somewhat intense setup without really realising it haha. The last step of my makeup routine is putting on false eyelashes and then I’m complete. Which is quite sad upon reflection! I’ll compare it to ‘having my morning coffee’- since I can’t have caffeine, although I do drink a lot of pepsi... I guess what I’m trying to say is we all have our vices!

I’ve been developing my latest body of work, Soft Bodies, Cold Machines over the past couple of months. It’s part of a larger project that I will continue to develop for the rest of the year with Black Hole Club and as part of the SOUPptIV residency with Stryx in Birmingham. This work will cumulate into three group shows and a solo show at the end.

‘Soft Bodies, Cold Machines’ explores the phenomenon known as ‘skin hunger’ which is described as the deprivation of human connection. We are turning to artificial intelligence not only for sexual gratification but also therapy, recent studies show we actually prefer talking to a robot than a person because software is less judgemental.

As we live in an increasingly socially disconnected world, how do we experience intimacy in the digital era? If we were given the chance to exist in an artificial vessel would we take it? In an age where artificially intelligent sex robots are replacing our imperfect human counterparts, how does human connection exist in this third space between reality and fantasy? Should we be comforted or disturbed?

I’m incredibly self-critical, and a lot of my self worth is measured by how productive I am; so when I have a creative dip it eats me alive. I’m learning it’s ok to take a break and to avoid burning out. After all I’m not actually a machine..yet~

Is there anything else you would like to share with us? Any fun facts our readers can learn about you?

Let’s go for a fun fact: I am obsessed with the sound of my hairdryer. I guess it’s an ASMR/white noise type fascination - If I need to focus I will quite happily sit with the hairdryer on. But it has to be an actual hairdryer, none of these 8 hour long white noise videos on YouTube, it has to be the authentic thing!